NOTE: This challenge is currently dead, as I'm unable to install the languages needed to run a match. If someone else has the time and interest to do it, I'm not opposed.

See the bottom of the post for a leaderboard.

This is a semi-cooperative king-of-the-hill challenge, where the bots construct paths through a two-dimensional grid graph. The bot who controls the nodes with the most traffic is the winner. However, it takes more than one bot's resources to actually build a connecting path, so the bots will have to work together -- to some extent.

In the following, let N > 0 be the number of bots in play.

The following picture shows an 8 × 8 grid. 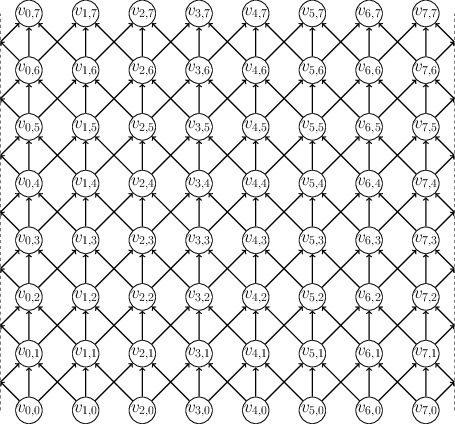 Each vertex of the graph is either inactive, active, or broken. All vertices start inactive, and can be activated by bots, which will then be their owners. Also, bots can break vertices, and they cannot be repaired.

A turn consists of a destruction phase and an activation phase. In the destruction phase, each bot may break one inactive vertex. That vertex is broken from then on, and may not be activated by anyone. In the activation phase, each bot may activate one inactive vertex. From then on, they own that vertex, and it cannot be reactivated by anyone else. Several bots may own a single vertex, if they all activate it on the same turn. In each phase, the vertex selections are done simultaneously.

One round lasts for exactly N2 turns. After this, the round is scored as follows. From each active source vertex, we perform N times a randomized depth-first search along the active vertices (meaning that the children of each vertex are visited in a random order). If a path is found from the source to some sink, then for all vertices along that path, every owner of the vertex gets one point.

The entire game lasts for 100 rounds, and the bot with the most points overall is the winner. I may increase this number, if the variance of the scores is too high.

The controller is written in Python 3, and can be found in GitHub. See the README file for detailed instructions. Here's an API to get you started:

Please remember to flush your output buffer. Not doing so may hang the controller in some environments.

Peacemaker is up and running, and Funnelweb received an update too. The scores jumped up by an order of magnitude. Connector exceeded the time limit in two games.

The full log with ASCII art graphics can be found in the controller's repository, in graphical_log.txt.

Tries to create a path at a random position. Because it can't create a path on its own, it searches for active cells and uses them. Credit goes to Geobits, from whom I stole some code. Also, this submission isn't finished yet, as it simply stops doing anything as soon as the path is built.

Edit: If a path is built, Connector tries to create multiple paths along the existing one.

Named after one of Australia's less friendly spiders. This bot first builds a funnel-shaped nest in the top rows, then lures other bots into building paths for traffic to the nest.

Here is a new animation of a 6 bot game on a 4/3N^2 board showing the funnelweb and some simpler bots:

The spider is run with python funnelweb.py.

This bot tries to create checkpoints so that any valid path passes through one of my vertices. Since there are N2 turns and the board is 2N2 across, I can activate/break every node on a single horizontal line (assuming I'm there first). Do this in an alternating pattern (x is broken, o is mine):

If you want to make a path, you need to go through my checkpoints :)

Now, there are several issues this might face. First, it's not going to do very well at all unless there are many paths. Since he doesn't make any productive paths himself, he really is totally reliant on there being some competitors. Even a couple competitors combining to make a single path won't help much, since he only scores one spot for each path found. What he needs to shine is probably quite a few bots making quite a few different paths. Even then, it might not score very highly, but it was an idea I had in chat, so...

If one of the spaces on the line is blocked/claimed already, I just search for a nearby spot I can use (preferably on the same x line, just shifted vertically).

To compile, it's javac Checkpoint.java. To run, java Checkpoint. You'll want to add/change the path to reflect wherever it is.

Attempts to draw watermelons on the grid.

Creates a bottleneck on the second line, and activate nodes on the path behind it.

If I didn't screw up, the final configuration should be something like:

Based on Manu's code.

This is a stupid example bot that never destroys anything, and tries to activate a random vertex every turn. Note that it doesn't need to check whether the vertex is inactive; the controller takes care of that.

Run with the command

You may need to replace python3 by python depending on your Python installation. To do this, just edit the bots.txt file. I updated the controller, and there's no need to mess with file paths anymore.

Creates a heatmap based on the state of every node (active/inactive/broken) and chooses the node which would have the biggest expected heatmap-value per person if it would choose that one.

Never destroys anything as that doesn't help the bot much.

I saw that some bots built from the top, and some from the bottom. This is the first (I think) to start in the middle and work up and down.

(it is not tested with the controller, so if it dose not work, let me know.)

Not the answer you're looking for? Browse other questions tagged king-of-the-hill path-finding grid or ask your own question.