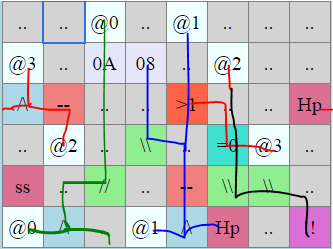 This was a nightmare. I don't think I can fit any smaller.

Why everyone do LU-RD diag?

231
Print every character your program doesn't have
86
Print your code backwards - reverse quine
15
Quine...but shifted by one
27
Mutual Negative Quines
22
Caesar-Cypher-Mania
21
Move to the printable ASCII front
18
Print a Symbolic Negative of your Code
32
Figure and Ground
44
Create a square of increasing size by replicating the initial code
16
Quines that print what their index is