This contest is officially over, the winner is jimmy23013. Congratulations!

The challenge is to make a program that prints Hello World! to stdout. The catch is that your program must have a Levenshtein distance of 7 or less from the program in the answer submitted before yours.

How This Will Work

Below I have already submitted the first answer using Python: print("Hello World!").

The next person to answer must modify the string print("Hello World!") with up to 7 single character insertions, deletions, or substitutions so that when it is run in any language that hasn't been used so far (only Python in this case) the output is still Hello World!.

For example the second answerer might use 1 substitution (r -> u), 2 deletions (in), and 1 insertion (s) to make the string puts("Hello World!") which prints Hello World! when run in Ruby.

The third person to answer must do the same thing in a new language, but using the program of the second person's answer (e.g. puts("Hello World!")) as their starting point. The fourth answer will be in relation to the third answer and so on.

This will continue on until everyone get stuck because there is no new language the last answer's program can be made to run in by only changing 7 characters. The communal goal is to see how long we can keep this up, so try not to make any obscure or unwarranted character edits (this is not a requirement however).

You do not have to tell which exact characters were changed. Just make sure the Levenshtein distance is from 0 to 7.

The key thing to understand about this challenge is that only one person can answer at a time and each answer depends on the one before it.

There should never be two answers with the same N. If two people happen to simultaneously answer for some N, the one who answered later (even if it's a few seconds difference) should graciously delete their answer.

Please make sure your answer is valid. We don't want to realize there's a break in the chain five answers up. Invalid answers should be fixed quickly or deleted before there are additional answers.

Once things settle down, the user who submits the most (valid) answers wins. Ties go to the user with the most cumulative up-votes.

Leaderboard: (out of date)

(user must have at least 2 valid answers)

(Feel free to edit these lists if they are incorrect or out of date.)

This question works best when you sort by oldest.

NOTE: This is a trial question for a new challenge type I have in mind where each answer depends on the last and increases in difficulty. Come discuss it with us in the chatroom for this question or in meta.

2 necessary and 5 for flowing towards C#

Despite the positions of @ and E, they are necessary. Sorry for editing late. Rollback if you already started working on this.

Gammaplex is yet another 2D language. The official interpreter will ignore all new lines, then rearrange all characters into a rectangle with the same width of the first line. The above code is like this in Gammaplex:

Oh, geez, that was easier than I expected it to be.

4mrZ inserted (4 chars), which calls the 4th index of code (the 5th line), reverses the stack, and then outputs everything in the stack as a char. I can get away with no newline due to the # character, which will teleport to the 90th character in the first line (which doesn't exist) (Z in ASCII), throwing an error and exiting the program.

Newline inserted before "Hello... (one char) to designate a new method line.

" substituted for ' at the end of World!' (one char) to end the quotes.

; inserted after the newly substituted " (one char), which is a return character. This leaves Hello, World! on the stack.

More interestingly, if you want to know what Vitsy is actually reading, here's the verbose mode version (any lines starting with : designate a newline):

You can test it here

I hope an extra newline is okay.

Distance 7 from #44
;#\ is useless but I wanted to make the future answer more challenging.

Does it count if it's exactly JavaScript syntax, but technically a different language?

Distance 7 from Answer 109: modifed ay into el, added ect followed by a space, and ;.

Opal is a Ruby dialect compiled to Javascript. Opal's stdout points to the browser console.

You can try it online here.

Distance 7 from answer 127: deleted newline, changed w into P, inserted n, deleted e, then ; and }, and because I'm nice I used my last one to add the last s of class.

Never heard of Suneido before today but according to the language specs, Print("...") is the print statement and // the comment chars for single line comments.

Sorry but as clever as this may be, PETSCII isn't ASCII. If this kind of shifting was allowed then arguably any 97 unique characters could be used. This is invalid.

...but for those who want the cleverness anyhow:

The "trick" comes from the fact that there are some little-known abbreviations in C64 BASIC. There's no abbreviation for REM, but it turned out dA for DATA served just as well...as long as you never try to read it!!

Technically speaking one has to bend the rules at least a little, as the Commodore 64 doesn't use ASCII...it uses PETSCII. Here is the "shifted" PETSCII equivalent. Thus a lowercase a is actually 0x41 (dec 65)...and an uppercase A maps to 0xC1 (dec 93) in the "shifted PETSCII" character set.

Next there are some characters with no exact equivalent. For instance, ASCII open brace { 0x7B (dec 123). The PETSCII standard would show that as a cross (✚). Yet if you write it directly into screen memory (as with POKE 1024,123) you get a box in the lower left, like Unicode's "quadrant lower left" character (▖). Unfortunately there are no PETSCII equivalents for the likes of [ 0x5B (dec 91)...only screen memory codes.

Hence I've substituted the screen memory equivalents into source for the codes of the five characters that have no ordinary mapping:

Because I don't actually know how on the keyboard to get the cross bar other than POKE-ing into screen memory, that's what I did. I typed the program in with a dummy character at first in the three positions where open braces existed and then wrote some poke statements as shown. You could put any character there really, but I wanted the code to be as true to the ASCII values as possible. 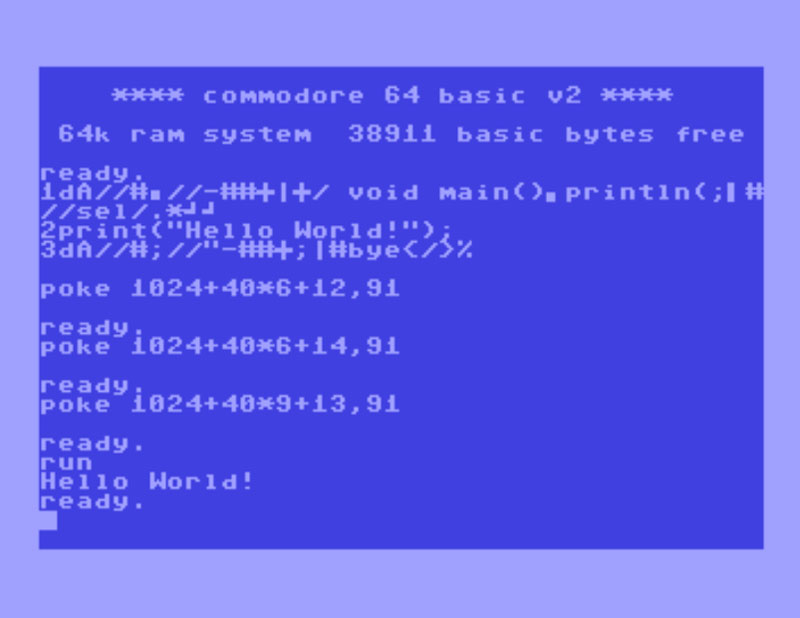 Voila. Of course when you're done with the POKE statements you'll have to cursor back up and hit ENTER on the code lines again so the source changes will take.

Be sure to get into shifted PETSCII mode before you run it, with CBM-shift or POKE 53272,23. How the program is produced isn't that relevant, as it could be saved and loaded, but this just gets it all on one screen.

Not the answer you're looking for? Browse other questions tagged printable-ascii hello-world answer-chaining or ask your own question.