This is the companion question for Code Crosswords. Robber answers go here.

See Where should we put robbers? for meta-info. 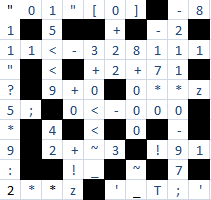 I had to fudge a bit on 7-Down by invoking undefined behavior. es1024 has indicated that this use of UB was the intended solution. It will work on most people's computers though. I came up with various expressions achieving the desired result such as -1 << 30, 3 << 30, 6 << 29, and ~(~0U/4) but all of them made it impossible for me to get 5-Across. So I used the Intel architecture-specific property that only the least significant 5 bits are used to determine the size of a left shift. Note that it needs to be ~_ and not ~1 so that the amount to shift by is not a compile-time constant. I tested the expressions with the following code:

(This solution actually requires several spaces, so it's not the one professorfish was looking for.)

That was great fun. Note that the # beneath the 6 is actually code and not a dark cell. Let's go through this:

Hint 2: [[4 3]]. This was one of the trickier ones, because I really got stuck on trying 4Z]]` or similar. Turns out you can use the Cartesian product m* on stuff that isn't an array, and it will make an array for you. So here it is:

Hint 8: E. I already had the 'd when I got there, so it was between choosing 'd1+eu, 'deu1+ or a variant where I used ) and a space instead of 1+ (for the non-CJam people, this taking the d character and increment and upper-casing it, in either order). However, the u in the final column looked useful for A-down. So I picked the first of those. In the end, 'd) eu would have worked, too.

Note that ] might also have been one of LMOQR.

Hint B: "m. I just really had to fit this one in with the rest, but there were few characters that mattered. I already had the { and the m. So instead of using a block, I turned { into a character, discarded it, and then pushed the two required characters:

Hint D: 124. I solved this one together with C-down, which was easiest with a decrement at the end. So I push a 12, a 5, and decrement the latter:

Hint 5: 2017. Two characters for such a large number? Just use built-in two-digit variables:

Hint 6: "18". I think there's only a single way to do this in 3 characters. Use the built-in 18, convert it to a string, and then to its string representation.

Hint 7: ' "\"\"". Probably the hardest part of the puzzle. In particular, I needed to get the "\"\"" in only three characters. The trick was to get the string representation of the empty string twice. That led to:

THe + isn't necessary, but was needed by 8-across.

Hint 8: !{}. The block needed to go in the code, so that left only two characters for !, which meant using another literal:

Hint A: -3u3. With the u in place from 8-across, I started to put -3 and 3 in the corners where no other hint cared about them. But then I needed an m at the bottom. I think there are multiple ways to get a 3 with _m_, but the simplest was taking the square root of 9:

Hint C: -1. I already had the decrement there, so I just put a 0 where no one else cared about:

Hint E: Stack: "". Well that was the simplest one. Just call the debugger: 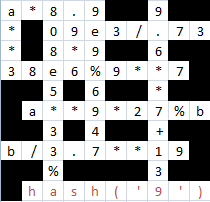 For all the lengthy floating-point expressions, I made a C++ program to generate Python mathematical expressions by force and evaluates them. It assumes all numbers are floating-point and only supports operators +, -, *, /, //, **, and ~. I used it to get every clue longer than 5 characters except a**9*27%b and the hash. With 6 or less blanks it finishes within a couple of seconds, while there is a bit of a wait for 7.

I guess I golfed this one pretty well, as there are 14 spaces. 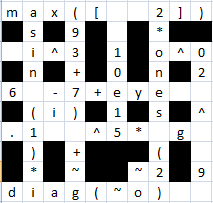 Not the answer you're looking for? Browse other questions tagged printable-ascii source-layout cops-and-robbers crossword or ask your own question.