Who doesn't love a good fractal? The Sierpinski Carpet is a classic example of a fractal.

To complete this task, you will be required to generate a carpet of type \$n\$ and print the resulting image to the stdout (see example below for formatting) \$n\$, representing the level carpet. Steps can be found on this Wikipedia article.

This value will be taken from stdin or equivalent.

For example, an input of 4 would produce a level 4 carpet:

An input of 3 would produce a level 3 carpet:

An input of 2 would produce a level 2 carpet:

And a input of 1 would produce a level 1 carpet (just a square):

Note the spaces between the columns.

The line starts with the ■ character.

As always, the smallest solution wins by character count (due to non-standard characters).

Alternatively, # can be used instead of the ■ character in languages that do not support Unicode.

Oh well, we're counting by characters, so let's do some Unicode unpacking:

Test it here. Just put the desired level into the input field.

After base conversion, this is

which is the same as the following, just with the Unicode character written as 9632c:

This code is based on the following observation: if we look at the coordinates (x,y) of each cell, then we get an empty cell, whenever both x and y have a 1 at the same position in their base-3 representation. If you think about it, the small-scale repeating pattern is the significant base-3 digit, then the next more significant digit governs the next larger-scale repetition and so on.

The contents of the resulting array are printed automatically.

Thanks to Dennis for shaving off three bytes.

You can try it here (You'll have to replace input('') with your desired input.)

I am abusing the kronecker product for this task. (It is a special product defined for two each arbitrary sized matrices. Example:

So heres an example for n=5 (In the old counting method it's 4);

A decimal coded ternary representation of the list of coordinates is first generated in @, (name chosen so there is no need for space between @, and for) using digits 0, 1, and 3. Now adding x and y coordinates in the decimal domain will have a 2 in the result if and only if there were two ones at matching positions. // is used to propagate the default variable $_ from the outer loop (for) to the postmatch variable $' when it is shadowed by the default map variable in the inner loop.

Not Racket's finest hour for golfing.

Based on a similar idea as my perl solution. After adding some spaces:

Minor tweaks. One 2 char gain relying on scanf being executed before the loading value of n for the execution of --n. The eol can only follow #, duh. 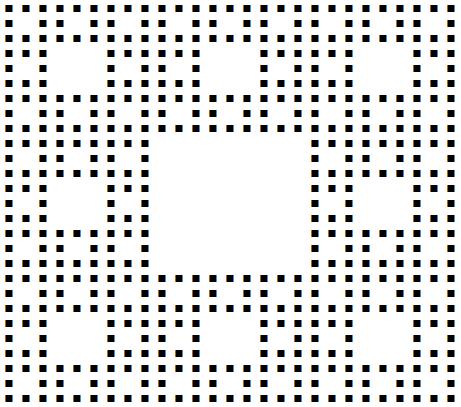 Due to how HTML plays with whitespace, a few characters had to be dedicated to the nbsp char. In addition, the default font of most browsers is not Courier, so I had to set it to that, too. About 20 characters worth of styling. If this requires a direct input method, I can add it, but changing the input currently is setting n to a different value.

As a result, the following code gets executed:

EDIT: Well, used the trick I don't like too much myself and compressed the code by 3 bytes. Dunno if that's the best possible way, but I'll go with it.

It may contain some unprintable characters, so here's a printable version of the string.

Not too great, but at least beats some languages.

What it expands to:

Somewhat ungolfed in case someone can't see how it works:

This is a direct translation of the formula given here

Since we're counting characters and not bytes:

In its decoded form:

Input is taken from command-line args:

Input from stdin. I tried to find a good way to avoid an extra function, but couldn't come up with any.

The n received as first argument in command line.

Only necessary spaces are included.

-1: Used ［ instead of ｛ to delete the first ； inside the loop.
+1: Fixed errenous behavior: ■ now corresponds to level 1, as specified in the original post.

94 bytes with the special character.

+15 thanks to DLosc for pointing out there had to be spaces between columns.

This was a quick fix to satisfy the spec and could likely be re-golfed further.

Port of @JonathanAllan's Jelly answer, so make sure to upvote him as well!