Consider an oddly-shaped box containing 29 numbered cells as shown in Fig. 1 below. 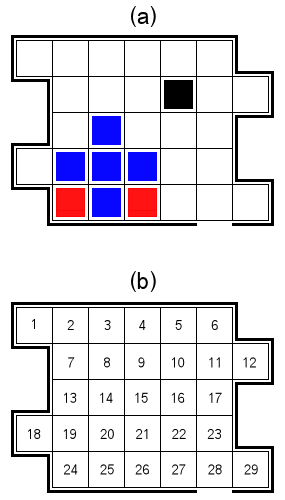 Inside this 2D box are two species of square-shaped animals: shubbles and smoles. Fig. 1 (a) shows some shubbles in blue, and some smoles in red. Each creature occupies exactly one grid cell. The box may contain anywhere between 0 and 26 shubbles, but will always contain exactly two smoles.

Being subject to gravity, shubbles and smoles sit on the bottom of the box, stacking on top of anything below them. Both species are exceptionally lazy and remain perpetually motionless.

The box also contains a stot, depicted as a black square, that occupies exactly one grid cell. The stot is not subject to gravity.

The box has one opening located at the bottom of cell 28, as depicted in the figure.

The box can be rotated by any multiple of 90°. While the box is being rotated, the shubbles and smoles remain stationary within their grid cells. As soon as a rotation is complete, they fall directly downward until either i) they are blocked by a wall below, ii) they are blocked by a shubble, smole, or stot below, or iii) they fall through the hole in cell 28 and exit the box. The stot does not fall; it stays fixed in its current cell, even if creatures rest on top of it.

The box cannot be rotated again until the creatures are done falling and have reached a new stable configuration.

Also, the stot may not move if it has any creatures resting on top of it (with respect to current gravity).

Sequences of manipulations are encoded using left-to-right character strings. For example, the string +<<^- indicates the box is rotated clockwise 90°, then the stot is moved left twice and up once (with respect to the standard frame), then the box is rotated 90° counterclockwise back into its original orientation.

For perfectly good reasons (that I cannot disclose), we wish to extricate all shubbles from the box without extricating a single smole. To accomplish this, we can use the manipulations specifically described above.

Before solving this problem, it behooves us to simulate how our various manipulations will affect the contents of the box, which is the focus of this challenge.

You must write a program that accepts two arguments from stdin (or equivalent):

You may assume that both arguments are syntactically valid, that the box starts in the standard orientation, and that the initial state of the box is stable and legal.

The program must output to stdout (or equivalent) either:

The winning program is the shortest program by byte count, subject to some extremely lucrative bonus multipliers:

Total score is floor( base score * multiplier ). Only one multiplier may be claimed.

It would be great if someone could hazard a guess as to whether this works right. 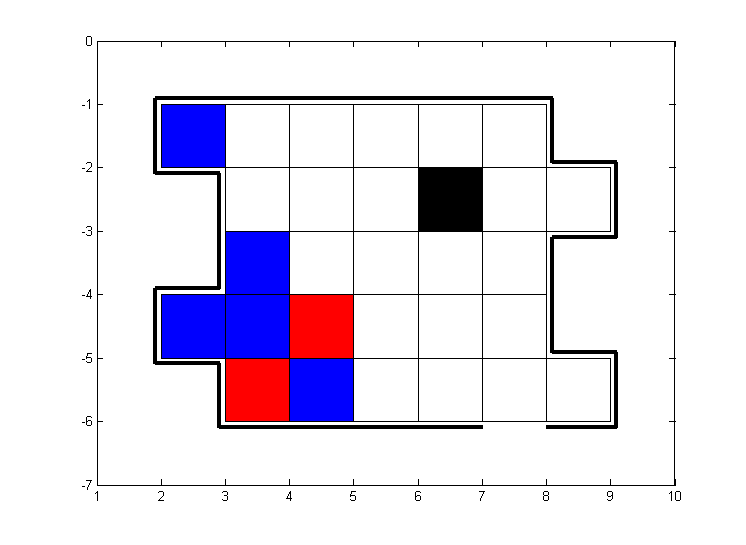 Not the answer you're looking for? Browse other questions tagged code-golf ascii-art graphical-output or ask your own question.

15
Animate a Rotating Lissajous Figure
38
Paint a still life (or a moving one) - draw an image in the Game of Life
7
Animating the Separation of Fluids by Density
10
Rotor Routers on a Grid
13
Can I make that shape with blocks, slabs, and stairs?
8
Let's get Animated!
17
A 2D Traffic Jam
17
The Double Slit Experiment
19
Counting creatures on a hexagonal tiling
18
Where will the gem-picking robot end up?