Output is a shape that encloses 1009 pixels.

Input is a positive non-zero integer.

Victory is decided by the largest input limit:

There is a 1009 byte limit on source code. If there is a draw the entry with the fewest bytes wins.

Let's start with the obvious.

Takes the number on the command line and writes o.png.

To encode a lot of information, you need a lot of perimeter. That means a thin shape. I start with a vertical bar of 49 pixels at the left, and add ten tentacles of 96 pixels to it. Each tentacle can encode 96 bits in a similar manner to @ell's solution, a total of 960 bits.

As BBC Basic cannot handle numbers that large, a number of up to 288 decimal digits is input as a string, and each set of 3 decimal digits is converted to a 10-bit binary number. Each bit is then used to wiggle one of the tentacles up by one pixel if it is a 1 (but not if it is a 0.) The program can handle up to 288/3=96 such sets of 3 digits 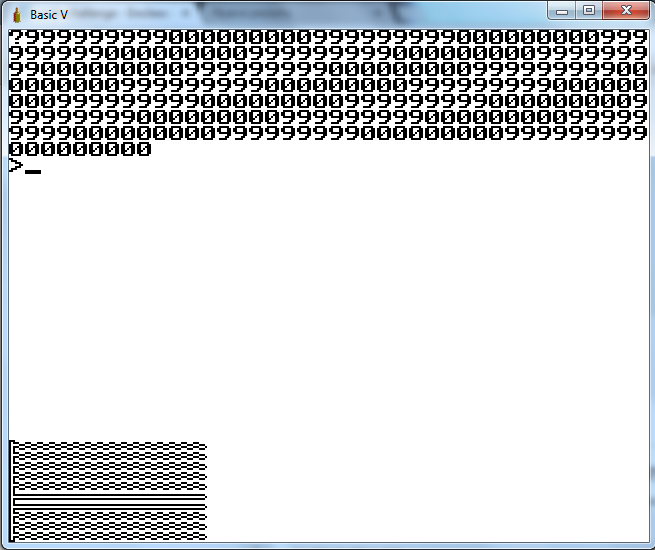 A.The answer to Martin's point 3 "is the shape connected if its pixel's touch only along a corner?" was "yes" so I understand my answer complies. Nevertheless, if you alternate (for example) 999's and 000's in every row, it looks very busy.

B. If we view this as a rectangle with bites taken out of the side, you can see that I allowed three pixels between each pair of adjacent tentacles, to ensure that the black line round the outside never touches itself. There is no specific rule on this (I hope my reason for asking is clearer in the light of my answer.) If the line is allowed to touch itself on the OUTSIDE of the shape, I could move the tentacles together and use less pixels for the vertical bar (and so make the tentacles a bit longer.) It would, however become very confusing to determine by eye whether a pixel was inside or outside the shape, so I think my interpretation that the outside of the black line should never touch itself is best.

C. BBC basic in this screen mode treats a 2x2 square of screen pixels as a single pixel. I've left this as it is, because it helps viewing if the shape is not too tiny. Each one of these BBC basic pixels is considered as a box of 4x4 logical units. From the start, the developers of BBC basic had the foresight to realise that one day screen resolutions would increase, so they made the logical resolution higher than the physical resolution.

The lower bound I've got there is ridiculously low, but I haven't found a better way than brute force to check yet.

I haven't golfed this yet, because there was no need to. I'll do that once someone proves they are actually tying with me.

The algorithm is basically doing a flood-fill from the top-left corner of the 109x109 image (offset by one pixel to allow for the line) and when I've flooded 1009 cells, I stop and mark the border. You said colours are up to us, so the background is white, the line is black and the interior is grey (I can remove the gray for a handful of characters if necessary).

The flood fill is quite constrained, but that ensures that I don't have to worry about about holes. Relaxing these constraints will probably dramatically increase my (yet unknown) score.

I'll try to put some lower bounds on the score now.

It is extremely slow, and I haven't actually managed to get any result other than n=0, but if you want to test it lower SIZE (the number of pixels) and BOUND the maximum side length of the bounding square and you should be able to get plenty of results. It was very difficult to try and calculate how many it would produce; I am fairly confident that the lower bound I give is accurate, but I suspect the actual count to be significantly larger, and I may try to improve on it later.

Not the answer you're looking for? Browse other questions tagged code-challenge graphical-output geometry or ask your own question.