Help Me Play My Harmonica

Yesterday, I bought a harmonica: 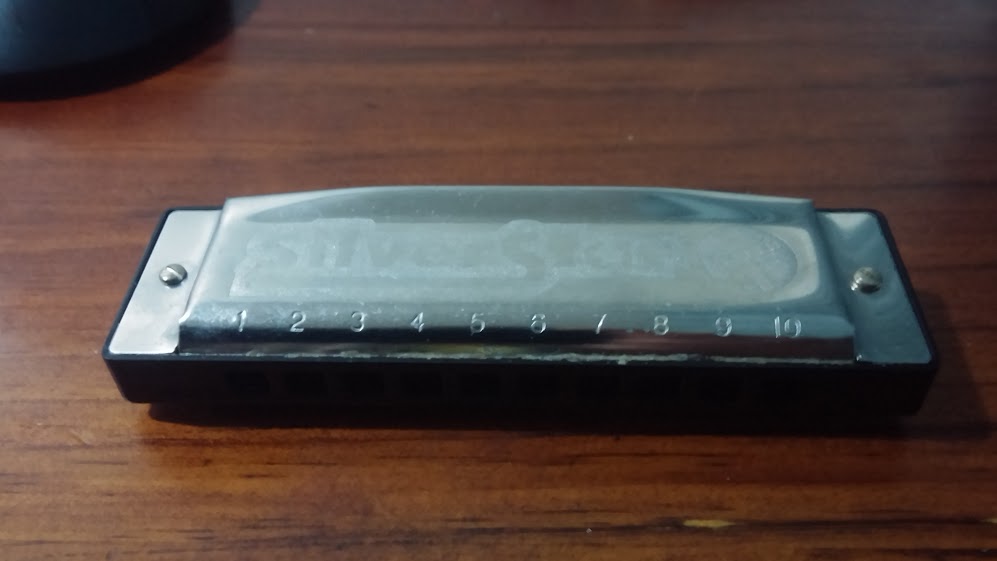 However, my dreams of being able to play soulful blues harmonica that moves people and causes a grown man to cry were quickly dashed by two problems:

As the above picture shows, my harmonica has ten holes in it. With each hole, I can either exhale into it or inhale into it -- the hole that I choose, and whether I inhale or exhale into it changes the pitch of the resulting sound. Each hole has a different pitch on exhaling and inhaling, but there are some combinations that result in the same note. Overall, my harmonica can play 19 unique different pitches. The pitches are presented in musical scientific notation - the letter represents the note, and the number represents which octave it is in.

When I breathe into the harmonica, apart from exhaling or inhaling, I can also choose whether to breathe thinly or widely. Breathing thinly causes only one hole to sound, whereas breathing widely causes one hole and both holes on either side of that hole to sound. I do not have the embouchure skills to blow onto two holes - it is either one or three.

The input is the notes of the music. The notes are notated in the same way they are above in the table, and they are comma separated. Notes wrapped in curly brackets represent a chord. For instance:

This means, "C4, then D4, then G4, then D5, F5, and A5 at the same time, then B5." Your program will take a string in this format as input and output True if it is possible for me to play the music on my harmonica, or False otherwise. For sample inputs and outputs, the example above should output True. The input {C5,F5,A5} on the other hand will output False.

This is code golf, so the shortest entry wins.

Here are some test cases:

(because the harmonica cannot play F4 or A4)

Input (the opening 2 bars of Let It Go):

You may assume that chords will come in lower to higher pitch order.

For ease of reading:

Given a string formated as in the problem description, t return True if the sequence is playable on the described harmonica, and False if it isn't.

There is no check for the order of the notes in the chords. Unless told otherwise, I believe this is sufficient since that isn't in the problem statement, and it passes all given tests in:

The function p accepts a string as input and returns True if the note/chord sequence is playable, False otherwise. It returns undefined results if the input isn't syntactically valid.

It also boldly assumes that chord notes are entered in order of ascending hole (such as in the example).

The character count can be reduced by 14 if the function is allowed to return logical true and false rather than their string equivalents.

Would appreciate any tips on golfing this down further as I am starting to learn ES6! :-)

Note that malformed input is handled badly - any string is accepted, and many malformed strings return true, for example:

Here's a more stricter version of the code:

This golfs down to 228 chars and now returns false on...

I know this can be golfed further. I will try to do so in a few hours;

Run this code in Latest Firefox's Web Console, you will get a method named C which you can then call like C("{G4,C5,E5},{F5,A5,B5}") and it will return True or False accordingly.

I am assuming a syntactically valid input.

EDIT: Simplified the regex and the length check.