A station model is a diagram for recording the weather at a certain place and time.

You must write the shortest code possible to graphically output a simplified (explained later) station model.

A tick is a line on the wind barb. A 50 knot tick is a triangle. A 10 knot tick is a line. A 5 knot tick is half the length of a 10 knot tick. The windspeed is indicated by summing the ticks, using the largest value symbols whenever possible. The ticks start at the end of the line and are arranged in descending order of size toward the circle. An exception is 5 knots, where the tick is placed a short distance away from the end (to avoid ambiguity with 10 knots.)

Here is some pseudocode to calculate the ticks required

You may only display two things on your station model: wind speed and direction. These must be supplied by the user: hardcoding is not permitted. The wind speed must be a positive integer in knots while the wind direction must be in letters (e.g. NNE, W, ESE). 16 points of the compass will be considered (up to three letters.) See http://en.wikipedia.org/wiki/Points_of_the_compass

The 50 knots tick must be as in the picture above.

Set cloud cover to clear (the circle must be empty.) The highest wind speed allowed is 201 knots (round it to 200).

Since the wind ticks only increase in imcrements of 5, round all wind speeds to the nearest 5.

As always, since this is code golf, the shortest code wins.

All of the following have a cloud cover of clear. 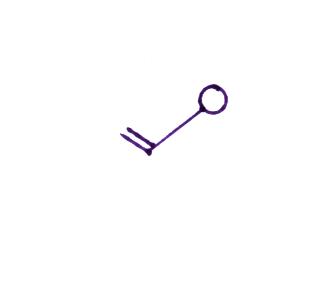 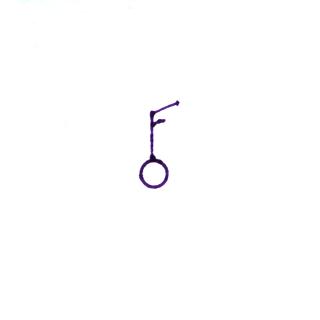 Parsing the direction is a dirty hack. I simply take a walk through a cartesian grid for each letter input. They aren´t echoed to the screen, and the input is terminated when a space is received.

As this is codegolf, I don't bother to normalise the direction vector. Therefore the size of the symbol drawn is dependent on the number of characters input. The proportions are the same for all inputs, however. Also, for the 3-letter inputs the angle is 4 degrees closer to the diagonal than it should be. For example, NNE is atan(0.5)=26.57 degrees instead of the correct 22.5 degrees, but it is barely noticeable. Both these points could be corrected for about 20-30 characters.

After the direction, the speed is input (this is echoed to the screen and terminated with a newline.)

All the test cases from the quesion are shown, plus two more to illustrate 2-letter directions:

In order to show them all together, I didn't clear the screen between runs. The different sizes (but constant proportions) of the arrows can be seen. 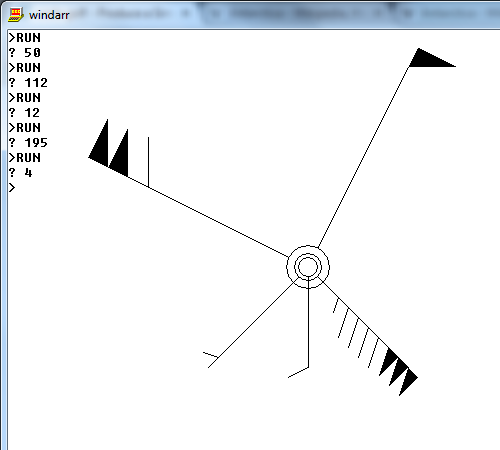 21
Thar she blows!
14
Convert degrees to one of the 32 points of the compass