Take a break to make a snake!

Our classic snake has developed an inbalance of growth hormones. To make matters worse, his tail is frozen in place! Given directional input as specified in Figure 1, write a program to determine where he will grow. 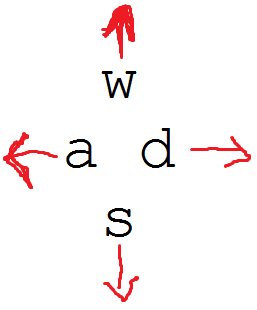 This is code-golf. Your score is the number of characters in your program. Lowest score wins!

Has to be run in a browser supporting ECMAScript 6 due to the arrow functions.

Here are fiddles which have been altered to run in any (common) browser by not using arrow functions. They also print to a textarea instead:

One of the OP's examples:

The example from Stretch Maniac:

Here is a (slightly) ungolfed version from sometime before I started really golfing it down:

Same approach as my previous answer, but correctly positioning the cursor before and afterwards. I'm pretty proud of the approach to cursor positioning -- basically, it first runs the snake in reverse, without printing out characters.

I bet you all can beat this.

"Ungolfed" with whitespace (this will not be kept in sync with the golfed version):

I decided to store the snake in a dict, with coordinates for the keys. Then find and iterate over the output range, substituting blank spaces.

PS. My first Golf :) Let me know if my answer is inappropriate

Uses 0 as head of the snake.

Try it online (no test suite for all test cases at once, because there is no way to reset the Canvas, so outputs would overlap..).

See this 05AB1E tip of mine (sections How to compress strings not part of the dictionary? and How to compress large integers?) to understand why .•₃º• is "adsw" and ŽO^ is 6240.

As for a brief explanation of the Canvas builtin Λ and its three arguments:

See this 05AB1E tip of mine for a more detailed explanation about the Canvas builtin Λ.

Not the shortest, but it beats Javascript, C# and Java at least.

The field is printed each time a character is entered and grows if the snake's head nears the edge. I don't know how portable it is--someone on the Internet said getch() doesn't work on non-Windows platforms. Hard to say whether ASCII 1 will look like a smiley face either.

The golfed version is quite annoying as there is no way to gracefully exit the program. Control-C doesn't work for me. On the other hand, the ungolfed version terminates if a character other than 'w', 'a', 's', or 'd' is entered.