Your challenge: write a "program", for a language of your choice, that causes the compiler/interpreter/runtime to produce error output when compiling/running your program which is identical to your program's source code.

This is a popularity contest. Most creative answer, as determined by upvotes, wins. If you can give a good case for using a standard loophole, you may do so.

Fails on first error, so it's fairly easy to do:

This was surprisingly easy to come up with.

Should work with some small changes in just about any other shell.

This is the only error message in ArnoldC, though you do have to turn off stack traces.

This is syntactically valid:

Save as 'Error.txt' and put it in the same folder as the npiet executable. If you want to golf, you can of course choose a shorter filename and adjust the code to match.

It seems fairly easy to do with lua. I also modified it to work on ideone.com as:

So despite looking error-like, it could be made a valid Rebol program if you gave all the words meanings.

However if you wanted an error at the parse phase vs. a runtime error in the code, the program/error could be:

So given that distinction is possible, you can do fun things if you redefine ** from exponentiation into something else (which I can't think of how to make useful for this particular challenge, given it's a quine.)

(Note: Trying to abuse it for a trick uncovered a peculiarity of what happens when ** (an infix operator) is redefined and then used immediately after. I tried:

My goal was to override the ** so that it would accept its arguments unevaluated. That way ** Syntax error: invalid "integer" -- "1A" (or whatever) would not attempt to assign invalid to error, but pass the symbols to **. But because ** is infix it attempted to raise the function body to the power of Syntax prior to the completion of the assignment of **:.

It can be remedied by putting any token between the [] and the **. But it helps to remember how your language evaluator works. :-P)

The issue here is replicating the ", which causes the error message to change from unexpected symbol to unexpected string constant. Pretty much any error R throws will have the form Error: <something> in "<bad code>", so you will pretty much always have to contend with the quoting. I tried this several other ways and always ended up falling back here.

The language requires programs to be in the form of a triangle. If not, it denies you the gate to programming in the world of triangles. It will not let you pass.

Who said the error had to be caused directly?

Since Android doesn't support %n in printf, Gnulib will replace every printf function in libc with its own custom implementation.

However, stupidly, said function will still use libc's snprintf function internally (which it is supposedly trying to replace because it doesn't work 🤔), and when using it, it attempts to use %n every single time it is called, even if %n isn't in the original format string.

%n used to be silently ignored on Android (similar to macOS), but Android 11 made these errors fatal, causing this error to be printed followed by abort().

I used set +m to prevent Bash from printing the signal error, and I had to compile from source to undo the -3 patch.

The file itself doesn't matter: m4 is guaranteed to crash no matter what. This includes running with no arguments.

Another fairly easy one using the "general approach" provided in the other answer. I still like my JavaScript ones better.

This is what you get in the Lua console with the usual iterative approach:

which is a bit shorter than the one obtained for putting the code in a file.

Replace quine.pl with whatever you named the file and enjoy.

Guess what it prints? 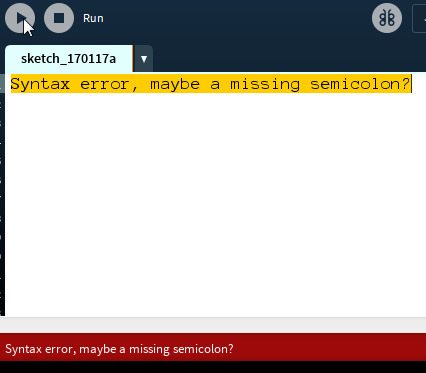 Technically this is cheating a bit because the pane below it prints expected SEMI, found 'error'. Unfortunately the word error is written in single quotes, so trying to copy that into the source of the program causes it to spit out a massive "Badly formed character constant" error... which does not include any singly-quoted words allowing for it to quine itself.

Whenever the pre-run parser encounters a NEXT which isn't paired with a FOR, it produces the error NEXT without FOR in slot:line. Here, the code is in slot 0 and on line 1.

The trailing newline is needed to produce an exact match. Run it with csh quine.csh (or just type it into the shell, that works too).

There are newlines at the start and end. (Cubically automatically dumps its memory to STDERR when the program finishes.)

Call your program a. and use rustc a..

Almost every program (that isn't very long) prints a partridge in A Pear Tree.

One of the goals of the language was to be good at polyglot challenges; as such, it tries to find a substring of the program that has a very specific property that rarely occurs by chance, and starts running the program there. If it can't find an appropriate entry point, it prints an error. The actual text of the error message was chosen for the The Twelve Days of Christmas reference. (Actually, the design for the language worked the other way round; the main goal was to have a language which errored out on almost any source code, so that it would make the reference in question, so I set about trying to work out what sort of language design would naturally end up doing that.)

Try it online (error message might differ in future versions of the language, though)

Compile errors in Rust all start with "error:", so copy/pasting the errors into the source a bunch of times eventually leads to these error messages. Default settings for the Rust Playground were used. That means 2018 edition, stable branch, and debug mode. I don't know what the target triple is.

Not the answer you're looking for? Browse other questions tagged popularity-contest quine error-message or ask your own question.