Are Pigs able to fly?

Your task is to write a function or a program in a language of your choice that analyzes a couple of statements and determines whether it can be concluded from those statements that pigs are able to fly.

The input is a String that can be read from STDIN, taken as a function argument or even be stored in a file. The input can be described using the following EBNF:

The output can be returned by your function, be written to a file or print to STDOUT. There are 5 different cases to be handled:

Output: Since Pigs are green and therefore intelligent, and everything that is able to fly is not intelligent, pigs cannot fly. Output is No.

Output: If pigs were not able to fly, they were also not old. But as they are old, you must output Yes.

Output: Although the first statement implies that pigs can not fly, the following statements contradict each other and therefore the output must be Yes.

Output: Whatever you want, as the String doesn't match the criteria mentioned above. 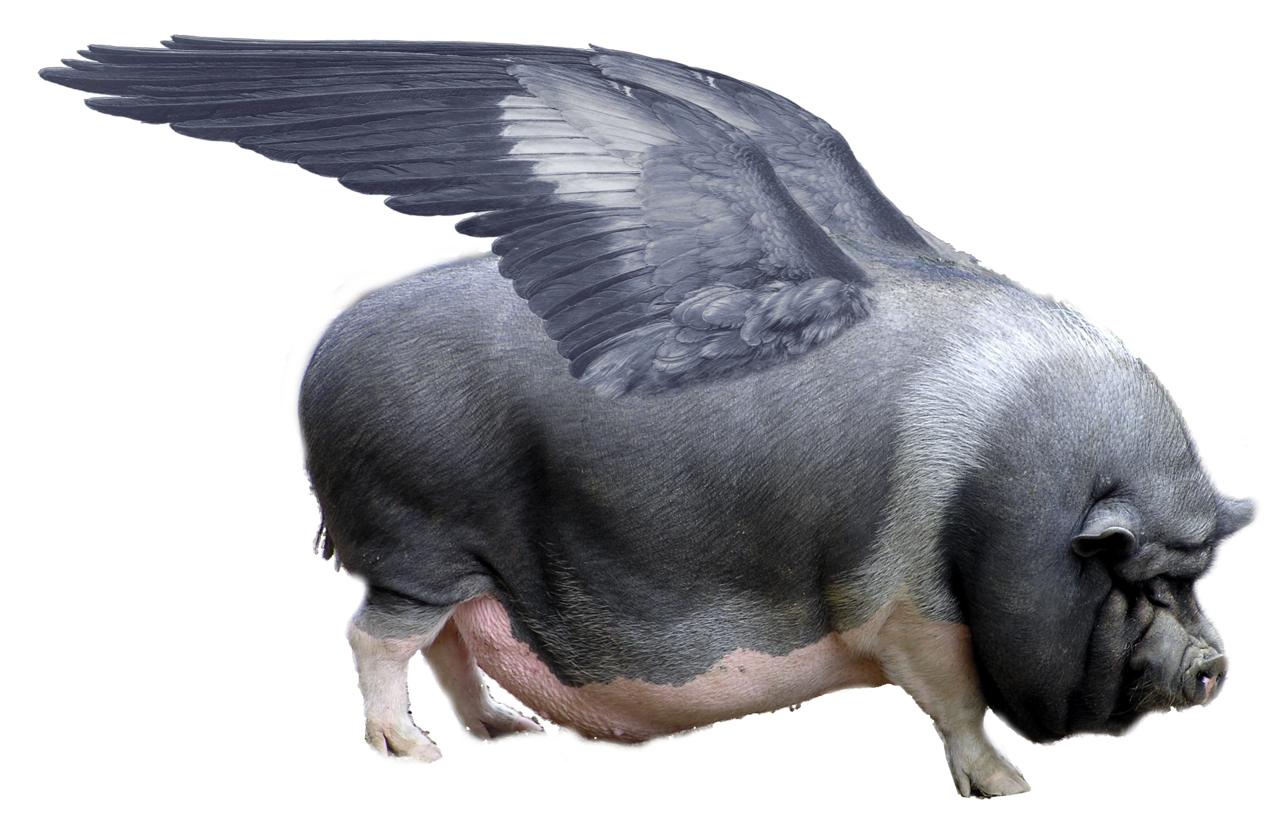 I wrote this on the assumption that for every property P there must exist some x and y such that P(x) is true and P(y) is false; without this assumption, the fourth example input wouldn't have a contradiction and would answer "No".

This should be compiled with the ghc command line option "-cpp". Input must be terminated by EOF (^D). You can try it online at http://melpon.org/wandbox/, but you cannot set command line options. Instead, you can prefix the program with the language option

It works by collecting the set of traits, then filtering the set of trait -> truth valuations using the implications in the input. The result is then tested to ensure that every trait can be validly assigned to both True and False (failure here is the ex falso quodlibet case). Finally, it looks for valuations which match the pig facts, checking the value for "able to fly" in each valuation.

Quite a few bytes were lost to threading state around: the set of traits seen so far, the pig-fact-selector function, and the filtering function determined by the implications. Probably the exact same idea would be much shorter in an impure language.

Edit 2: Saved some more. Used the (#)=(,) trick to save 2 bytes and learned about pattern synonyms (https://ghc.haskell.org/trac/ghc/wiki/PatternSynonyms), but the notation was too verbose to get a savings from eliminating the rest of the pairs in this program. Squeezed out some more savings by changing the patterns that the parser searches for. For example: if a sentence doesn't start with Pigs and we have anything left in the parser state, we parse a "Everything that is.." sentence. This saved lots of characters in the patterns for X and %.

For each a -> b in the input, we add the given clause and its negation not b -> not a to the set of clauses and then compute the set of propositions that are ->-reachable from any proposition using a fixpoint loop. Whenever we encounter a contradiction, we throw (and later catch) a ZeroDivisionError and print Yes.

Finally, we check if 'able to fly' (and/or its negation) is reachable from the 'is pig' proposition '' and print the appropriate response.

EDIT: This is buggy, fixing it. Fixed.

The code above defines a function f, which takes one parameter representing the textual input and returns Yes, No, or Maybe.

The ungolfed code (including unit tests) is available here.

Not the answer you're looking for? Browse other questions tagged code-golf natural-language logic or ask your own question.

14
Is a statement of propositional logic always true?

73
Check if words are isomorphs
16
Matchstick Equations
17
Fixing a logic system
7
How secure are my locks?
12
Unshorten Google Links
7
Check if a given string is valid romaji
23
Can I Settle Down?
18
Rubik's Snakes! (Part 1)
14
How many Sets are there?
11
Is it a valid line in "Girls & Boys"?