A Most Excellent Code Golf Adventure

You dudes, the Most Excellent Adventure is a home brew roleplaying game system based on the Bill & Ted Films, plays gnarly air guitar riff.

In this game system, when you draw from your dice pool (you have between 1 and 12 ten-sided dice, with faces labelled 0-9) you need to connect the results as a phone number on your phone pad:

Bill and Ted want to play this game on their telephone kiosk, but haven't the first clue about programming. As Station isn't around, they want you to program it. The kiosk had access to all programming languages and OSs past and future (causality forbids you using any future technology... No imaginary python 7 !)

Your input is two numbers between 1 and 12, representing the number of dice player 1 and player 2 have respectively. The output is the result for each player, and the length of the largest number they could dial.

Also, as you're programming this in a telephone kiosk you can only access 0-9, a-z, the * and a # keys in your code. Letters are accessed by repeated typing, much like on a mobile phone. Every other key must be input in the kiosk as its ASCII code in hex like so: #0a the upshot is when scoring your submission, these keys "cost" three times as many.[Unclear / Incorrect?]

For instance to type ~ you press the hash key once, the 7 and then 3 three times to cycle through the digits 3de. This gives the code #7e which corresponds to ~. When you upload you code here you can just type the ~, and count it as five characters. 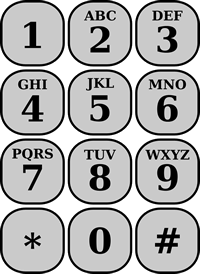 This is code golf as Bill and Ted will get bored otherwise. Let the coding commence plays gnarly air guitar riff.

My entry is golfed a bit more - I realized (doh!) that the variable names should be characters that require less telephone keypresses (a,d,g,j,etc).

This program produces the output exactly as shown and takes the input as command line parameters. If line endings are 1 byte there is no advantage to using : to put it all on one line (#0a vs #3a). Run it with cscript script.vbs 8 10 replacing 8 and 10 with whatever values you want - it tries every combination in order to get the maximum string so it is SLOW.

I just have one question: if you needed a two numbers beside each other that were both on the same key isn't it a bit ambiguous. Wouldn't the text a=e (22#333333) be the same keypresses as a>d (22#333333)? How do you differentiate where the character boundaries are? I didn't specifically check for every possible occurance of where things on the same key are beside themselves and I don't know what I would have done if I did notice it...

Ok, I am finally ready to score my entry - that of course means no more changes to it because of how long it takes to transform it to a score. The transformed phone input is:

Not the answer you're looking for? Browse other questions tagged code-golf number game restricted-source or ask your own question.