In order to be considered an obfuscated program, it must meet at least two of the following requirements:

Here is a Stack Snippet to generate both a regular leaderboard and an overview of winners by language.

Let's do something explosive. These commands (break rule #1) generate "Hello World" made by TNT in a Minecraft superflat world. 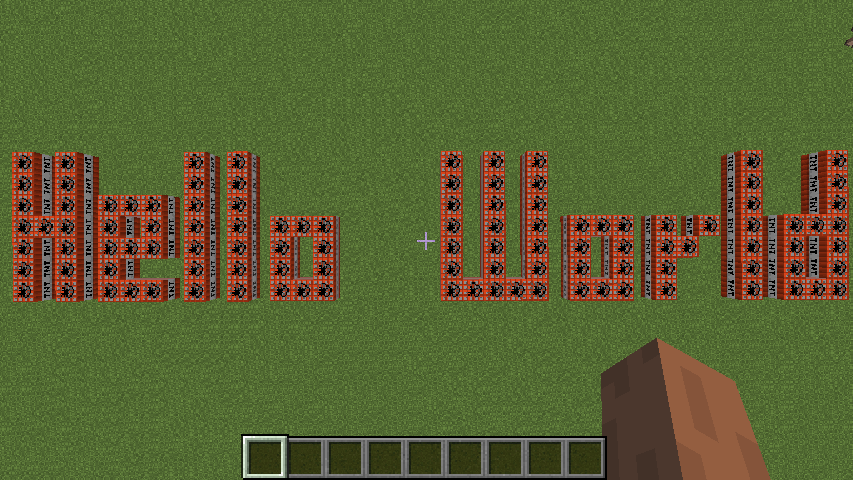 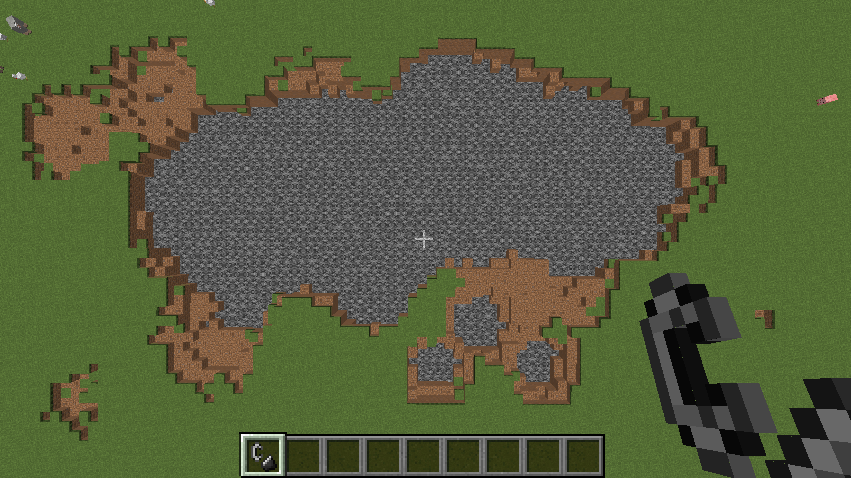 Fourier is always obfuscated. This follows all of the rules.

This could maybe be refined a little.

Nota: in order to prevent long time compute, you could use pre-computed 4k pi value:

Will render (same, but quicker):

This is my first post here, so I'm not 100% sure I am doing everything right. Please let me know if there are any changes I should make! I have been working on implementing an interpreter for Labyrinth in my spare time, and since I just got a partially-working prototype (still don't have any grid manipulation or the ? ! \ characters), I wanted to write a Hello World! program as my first test, since I hadn't programmed anything yet in the language. I decided to do it without any alphanumeric characters to add a little bit of an extra challenge, but I haven't really done anything to hide how the code works.

Old versions had an extra colon right before the period at the end of the clause that produces "d" and, before the @, the "!" step is inserted.

In total, there are 12 distinct characters used, with three of those characters (},{, and @) only being used once and the decrement operator ( and the division operator / only being used twice. It is impossible to remove @ from the program, but { and } are unnecessary and only used to save characters in the 87-to-111 step. The ( character can likely be removed in favor of a combination of #, -, and ), and it is likely possible to shave a few others, like the + character, but that would come at the cost of being significantly longer. Division removal would be very expensive in terms of character count, but possible.

Using numeric characters, the shortest Hello World! program I know of is 43 characters (with 9 distinct), which means that the length disadvantage is only 67%, which I believe is quite a bit less than other languages.

Should meet all three requirements.

So the only way is to load a module, that internally loads IO::Handle. Which will indirectly enable the use of STDOUT->say.

I decided to emphasize on obfuscate, with golf secondary. This is written entirely in C, and it only breaks rule #2 laid out in the original post. It also breaks I don't know how many C programming rules...

Not very heavily golfed, but I was going more for obfuscation anyway. Your mileage may vary, you'll probably have to do some crap to get the hardcoded address of printf right. No forbidden characters. You could easily shorten up a lot of stuff by not using different numbers of underscores as variable names and instead using 1 letter things, but I think it looks uglier this way.

I know I'm a little late to the party, but I saw the Befunge-93 solutions and decided to see how small I could make one while still following all the rules.

Went as small as possible on this guy. Hopefully y'all can see that. This breaks rule 2.

Why does this language exist?

Meets two of the requirements

Built-in that pushes the string Hello World. Since it meets two of the requirements, it is valid, but it's not really obfuscated, is it? How about one that meets all three requirements?

Pushes Hello World as a dictionary-compressed string and implicitly outputs. It meets all of the requirements, but it's still a bit boring, no?

Builds the string kh and evaluates it as Vyxal code. Meets all three requirements, and definitely the most obfuscated of the three programs.

Breaks the second rule to use some F# keywords.

It doesn't beat Golfscript, but I figure J deserves an entry anyway. (This is just a minor tweak of the second example on the J vocabulary page for the word i..

I went for obfuscation rather than size. (If you can't figure out how it works, it is a variation of this guy's method).

Boring straightforward one, but meets all requirements and is short-ish.

329 bytes including newlines and extraneous backslashes on newlines (which are 7 bytes).

C++ is in scare quotes because of all the implementation dependent details (gcc, appropriate linux kernel, x86). Doing this challenge in C++ is difficult because right off the bat #include is forbidden.

I think there's technically a bit of undefined behavior here as well, since I don't tell gcc all the registers I clobber (Things like %edx cannot be referred to directly) which is unfortunate.

This satisfies ALL the rules provided.

Of course, this doesn’t contain any of the restricted characters.

(This answer is technically cheating because Sclipting was invented after this challenge was posted.)

This is not really genetic programming. It's just a pun. The only violation of the rules is the function name putStrLn, which is a builtin I/O function, and follows the spirit of the rules even if it doesn't quite match the letter.

It basically preforms a Caesar cipher two times. Because you can't have a 2 in your code, I just used 1+1. It doesn't break any of the rules.

Noticed there wasn't a Pyth entry yet (probably because the question's been around longer), but wanted to add one for completion's sake!

Thanks to James Holderness for saving me two four bytes! (I don't know how to count)

Why is this 7-year-old challenge in the front page? I don't know! What I do know is that I came up with an answer before I realized the thread is ancient, so here goes:

Works in complete disregard to the third rule, but that's fine because rules are made to be broken anyway it meets 1 and 2.

OR to print to stdout (the same length)

Not the answer you're looking for? Browse other questions tagged code-golf obfuscation hello-world restricted-source or ask your own question.