The strange life of a beehive

Researchers recently discovered an interesting bee colony that lives in an infinite field of honeycomb:

Each cell can house a bee or not. In fact, the lives of those creatures appear to be a bit ... chaotic. It could be calculated that a colony always starts with the following pattern: 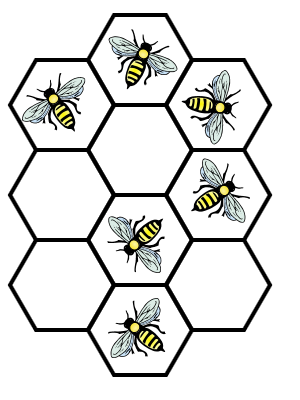 After that the bee's life cycles are divided into so-called generations. Each generation old bees die and new ones hatch and it primarily depends on their cell's neighbors:

Dying bees don't die until the end of a generation so they still affect surrounding cells that might hatch bees in the next generation.

Now that we know how such a colony works, we can simulate it through any number of generations.

Input is a single number N, given on standard input, terminated by a line break. 0 ≤ N ≤ 150. This is the number of generations to simulate.

Output is a single number, on standard output and optionally followed by a single line break, which represents the number of living bees after N generations.

Shortest code wins, as is customary in golf. In case of a tie, the earlier solution wins.

I know there are only 22 tests instead of 151 (mainly because solutions are often quite slow). Please refrain from embedding the exact test cases instead of solving the task. These scripts are a convenience for you to test whether a change still causes the program to behave correctly; not that you can adapt your code to the specific test cases.

This task was part of a golf contest held at my university during 2011-W24. The scores and languages of our contestants were as follows:

Our own solution was

Input and output as specified above, passes all test cases defined.

Edit 1: changed back to a wrapping solution instead of the "additional space"-version (which was shorter in an intermediate version but now is several characters longer).

Edit 3: warning: this edit made the program horribly slow. I thus reduced the dimensions to 200 each which still is sufficient for up to 150 iterations. Instead of indexing the array by a variable we constantly rotate the array forward. Not really good design, but now we are considerably below the 150.

This solution keeps track of bee locations with a set of complex numbers. It is pretty slow because the inner loop is quadratic in the number of bees. I've tested up to 50 and it works.

Here is a slightly ungolfed and commented version:

Not the answer you're looking for? Browse other questions tagged code-golf hexagonal-grid simulation cellular-automata or ask your own question.

17
Longest non-repeating Game-of-Life sequence
30
Life can be colorful!
8
CCC 2016: Circle of Life
10
Game of Life and Fatigue
18
Change the rules of Life
18
Game of Game of Life
30
Is it a still-life?
32
Minimally destroy CGCC in Game of Life
15
Keep PPCG running in Game of Life