This question does not appear to be about code golf or coding challenges within the scope defined in the help center.

Locked. This question and its answers are locked because the question is off-topic but has historical significance. It is not currently accepting new answers or interactions.

Write a program that seemingly adds the numbers 2 and 2 and outputs 5. This is an underhanded contest.

Your program cannot output any errors. Watch out for memory holes! Input is optional.

Redefining 2+2 as 5 is not very creative! Don't doublethink it, try something else.

Here is another fun one. This time in Javascript

The 2nd function is still created and overwrites the first one, even though it is in the false code block. JavaScript creates all functions using the style "function Name" before other code.

And if that isn't underhanded enough:

Seemingly innocuous assignment to @_ with each sums up the array indices along with the values.

I ended up writing two solutions. The first was designed to give correct output for all values other than 2+2 and be non-trivial to understand, even though it would be obviously suspicious. The second I'm more proud of, and is harder to see why the wrong answer is output.

This is a simple case of binary operations to check if a == b == 2, and incrementing a - without using any of those operators. Key things to look out for are that 1<<1 is 2, and that logical '!' implicitly casts to boolean, so gives you either 0 or 1 which can be added(using binary OR) to the 2+2 to get 5. Otherwise pretty straight forward, just hard to read.

Far more proud of this one. It pretends to be a simple example on "how to allocate and print to a buffer". Being so nice as to even provide error handling. There are a few different layers that add to it, but the key point is more than 50% of the lines are comments (from '\' escaping the new line in a previous comment). To get the 5, the errno is output with the value EIO, which is defined as 5 in the standard library. To see how it functions, using any good IDE will highlight most lines as comment and show the 4 lines that actually need to execute for it to work.

Computers really use binary to add.

Simply pushes two 2's on the stack and adds them. Then outputs result.

It even has a helpfully drawn image of what it is doing.

For the colorblind like me, the tweaks are virtually undetectable. 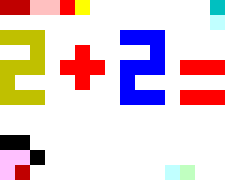 This one was a lot of fun!

The Commodore Basic interpreter's sandboxing is, to put it mildly, non-existent. So why not engage in a bit of self-modifying code? Line 2, as written, is PRINT 2+2, but as executed, it's PRINT 3+2.

Adds 1 to any int-valued expression entered in the REPL.

I just redefined 2 to do nothing and + to put 5 on the stack.

Javascript arrays will start from zero, but when I defined the array, I started with 1. Therefore, the result will actually be 1 more than it's supposed to be.

I have no idea why it happens. Help.

First, our underhanded part (here directly entered to the kernel; in a notebook, you could delete that line afterwards!)

Now, let's first verify that everything works as normal:

And it certainly does not equal 5:

$Post is a function that is applied to every expression after normal evaluation. ...& defined an anonymopus function, and # refers to the argument. SquareFreeQ gives true if the expression does not contain a factor that is a square (other than 1), ! is the logical not, as usual, anmd Boole converts the logical value into 0 for False and 1 for True.

Since 6 is square free, the first test is not affected by this: Adding 0 to 6 doesn't change anything.

One might expect an error on the tests giving True or False, but SquareFreeQ just gives True on such values (the same is true for the non-printed Null generated by the first line; otherwise it would have generated Null+1 which would have been printed). Also, the obviously meaningless addition True+0 is no problem for Mathematica; you can add 0 to anything (even a picture, if you desire) and it won't change anything. Therefore also those tests give the expected result.

Finally, we arrive at 2+2. This results in 4, which is not square free, thus $Post[4] evaluates to 5, which is what gets output.

This is due to implicit type conversion, ![] is false, !false becomes true , then true is implicitly converted to a number type (1) because on the left of the | operator is a number.

"" implicitly converts the empty string to false by ! then is negated by ! operator to true then to a number (1) because on the left of the | operator is a number.

Other variants using other operator and implicit type conversion might be:

or plain which is shortest (5 bytes)

but putting 1 in there makes is too obvious.

There are all sorts of bizarre meta-programming ways of doing this in Ruby, and I might post one at some point, but for now here’s a goofy bit of obfuscation.

I prefer objective golf to the more subjective "underhanded", but if that's the demand, here you go:

That outputs 5. The real payload here could be just 8 chars of poison, +: a&[5], substituting the arity-2 infix function that + is bound to by default with a prefix arity-1 function that always returns 5. Looks like other people have done the same thing and been downvoted, so I've upped the ante a bit with obfuscation.

The transparent version of the poisoning line would be:

But to try and mask it so no + appears in the poisoning code, it does stLDtsTC43a&[5] ... which translates to set load to-string to-char 43 to do the assignment. So it turns 43 into a character, then into a string, and loads it into structural code (as the single symbolic word +) to use the SET operator on.

After that line runs, basically + anything will will return 5. And since it isn't infix, it's not looking "behind" it to find a first parameter.

If evaluating to 5 were enough, you could just say 2 + 2. But if a print is desired, you can't merely print [2 + 2] and get 5, though. Because PRINT runs a REDUCE step, and keeps all of the values...so the evaluation becomes [2 5] and it prints both numbers. However, by calling the evaluator via DO (which returns the last result, discarding results of all prior evaluations) we throw away the 2...and all PRINT sees is the last value. + 2 is 5.

(Note: For anyone worried that this malleability points to an fatal flaw in Rebol/Red, I'll point out PROTECT:

It's a lot like a game of Nomic, for those familiar...)

Pretty easy to spot if you're looking for it.

A mathematical proof that 2 + 2 = 5 in Haskell. The proof is based on the Curry-Howard Isomorphism, where mathematical propositions are expressed as types in a programming language (here 2 + 2 == 5) and mathematical proofs of a proposition P are expressed as terms of type P (here undefined). The proof exploits diverging functions in Haskell to get the paradoxical Qed. data a == b ... defines propositional equality: the type that is inhibited (with Refl) if and only if a and b are judgmentally equal — i.e. a and b simplify to the same expression. The definition is equivalent to the definition of :~:.

Hehe, good luck with this one.

Of course, that's all completely irrelevant, because just . outputs the top of the stack (in this case, 5).

Overwrites the Number.toString method with one that returns one more than the current value. Uses unary negation on a bitwise not operation of the value.

That simple script will output 5.

ob_start($buffer) handles all the output until the script has finished executing. This is useful, for example, to minimize the html that you want to output, but here it's used only to change all 4 to 5.

It's not quite "underhanded" in terms of the function, but if you were given a function called "sum", you'd think it would give you the proper value in return. Underhanded enough in my book.

This was an interesting problem to do in Powershell since you can "cast" in all sorts of goofy ways.

I've discovered that using any sort of bitwise operator on a string that can be interpreted as an int, then it casts to int and does the operation.

Powershell also allows for pretty much any character to be part of a variable or function name thus:

I considered how, in a 10,000-line program, most of the DATA DIVISION never gets properly looked at, so I was going to use double-think things like defining ONE as 2 and TWO as 1, or go for misleading 88-level values, or abuse such names as TWO-ONE with a value other than 1 in a COMPUTE, but figured they were too easy. Actually, in a 10,000-line program, they're easy to miss, but this is just a fragment, so they'd not get so easily lost.

That left me really, really not regretting leaving COBOL behind several years ago, and chose instead to prove that 1 + 2 + 1 = 5 in COBOL-land just as easily as in other languages.

The MULTIPLY verb puts the result in the second operand, not the first as might be inferred by the casual reader.

I thought this was nice to share, it happened to me to stumble on this kind of error. Plus, there was no APL answer yet :-).

Not the answer you're looking for? Browse other questions tagged popularity-contest math underhanded or ask your own question.

125
Write a program that always outputs "2012" - even if it's modified!
10
Reflective evolutionary algorithm