Next digit of rational number

The π was recently computed with accuracy to 100 trillions digits, but it is useless to us. We can't do accurate enough math, because rational numbers are too boring and so we don't know that much digits of them!

Your task will be to write program or function which takes string of digits including decimal separator and outputs next digit of this number. You can get next digit by knowing, that the input is composed out of two strings (ignoring the decimal separator) like this abb. For example the number 0.1818 is composed of string a which is 0 and b which is 18 and the output will be first digit of b, which is 1. If there are multiple choices for string b you have to use longest one. The string a can be empty.

Uses , as the decimal separator. Returns its output as capture group \2.

It occurred to me after writing both of the below regexes that an entirely different approach would also work.

It even almost works in GNU ERE:
Attempt This Online! - but fails on the 5.0000000 case, because this engine really doesn't like to backtrack much. The strangest thing is that if REG_NOSUB is enabled, it claims to match everything... is it lying? It's Schrödinger's match. (You can experiment with that by changing SHOW_MATCH to 0 in the test harness.)

This 20 byte regex obsoletes the other two below, as it runs at the same speed or faster... but I'm not sure if I want to delete them, since they're interesting in their own right. And they would still be the only working solutions if the entire string could be littered with any number of decimal points.

Returns its output as capture group \3.

This works (using .NET's Balancing Groups feature) by pushing a portion of the end of the string onto the group \2 capture stack, one digit at a time, and then scanning in reverse from the position it started from, popping off one digit at a time from the stack to check that they match. The last one popped off is then the return value, if it matches.

Try it on regex101 - putting this link down below here because regex101's .NET support is a bit buggy. With this example, it sees the capture groups in the wrong order, and thinks the return value is in group 1.

Returns its output as capture group \1.

Try it on regex101
Attempt This Online!

Note that the only reason this regex is so complicated is because of the presence of the decimal point. If not for that, the solution would be (?=(.+)\1$|.$). (which is what I came up with before realizing the decimal point was in the way, when I still wanted to return the output as the match instead of a capture group), or what is used in ovs's Retina solution, ((.).*)\1$.

But this is a pure regex solution, and can't do any substitutions before doing its matching work.

Java's split method just doesn't work the right way to be useful for this.

(If it must be a pure lambda.)

Uses , as a decimal separator.

Takes in a string with , as the decimal separator.

S/\.// returns a copy of the input string with the decimal point removed. That string is matched with ~~ against the pattern ((.) .*?) $0 $, which looks for the repeating portion at the end of the string. [0; 0] looks up the first submatch group of the first match group (ie, the digit matched by the (.)) and + converts that match object to an integer.

Input is in cell A1 of the active sheet. Output is wherever the formula is. Breaking down the LET() function into the variable,value,...,output format, we get this for the first two terms:

Now it gets into the more complicated final term:

Screenshot with details for one of the test cases:

Screenshot with all the test cases: 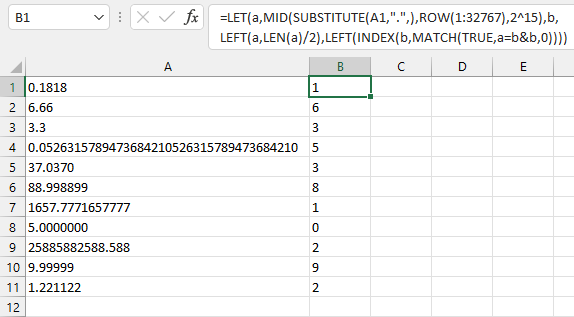 I recently added string literals to lin, still not sure if I regret doing so...

VBA will pad the code with spaces automatically. The above input is valid but here's what it looks like after that auto-formatting:

-12 bytes thanks to @Unrelated String

Not the answer you're looking for? Browse other questions tagged code-golf string rational-numbers or ask your own question.