Many old chess books use descriptive notation to notate squares on a chessboard, naming the file (column) of the square based on the starting piece positions of White or Black, depending on whose move it is. The ranks (rows) are numbered 1 through 8, with 1 being closest to the player. For example, from White's perspective, QR2 represents the file where the queenside rook started, on the 2nd rank from the bottom.

However, this system has been entirely replaced by algebraic notation in the past few decades, which simply notates files with letters a-h and rows with numbers 1-8, always "from White's point of view". Therefore it would be convenient to have a program that can translate squares from old books.

Note: This problem is the simplified inverse of Convert Algebraic notation to Descriptive notation 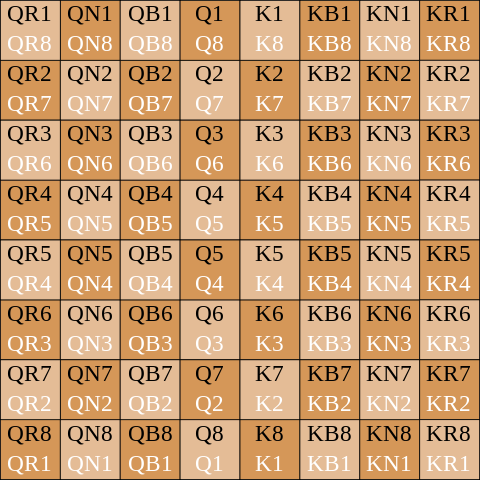 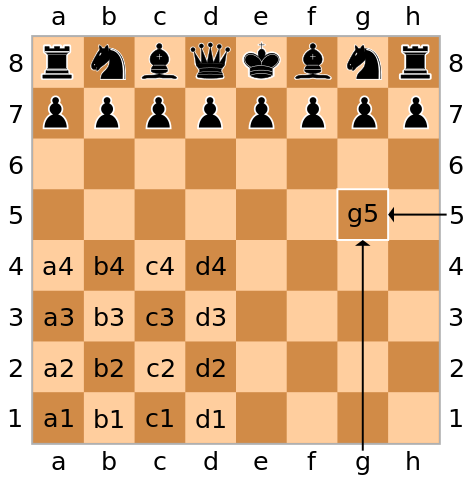 Given a chess square as a string and either white or black's perspective in descriptive notation, output the chess square in algebraic notation. Reasonable inputs may be used, such as a boolean for white/black perspective. For simplicity, we do not handle moves (including captures) or special symbols (promotion, castling, blunders, end of game, etc.)

Expects (white)(string), where white is a Boolean flag.

We parse the descriptive notation as a base-29 string and save the result in \$q\$.

For the column, we apply this minimal perfect hash function:

It is quite inefficient because it tries all tuples \$(b,m_0,m_1)\$ even if \$(b,m_0)\$ alone leads to an unrecoverable lookup collision. But this works fine for a such a limited search space.

A golfed version of @Adam's answer which I was advised is different enough to warrant a separate post.

Try it online! (the footer is a test suite that tests all 64 possibilities from a given player's point of view)

Function submission. Takes the coordinates in descriptive notation as a function argument, and the viewpoint (white=0, black=1) as a command-line argument.

The probability that a randomly generated function with an 8-element codomain will map the eight column names onto eight different outputs is approximately 1 in 416. As such, it's possible to convert the column names from descriptive to algebraic notation simply by searching through Jelly's catalogue of random functions to find one that's a perfect hash function for the given inputs (i.e. it maps each of them to a different number from 1 to 8), and specify the codomain using an 8-character string that contains the desired output column names in the order with which the function generates them. Function #2423 happens to have the desired behaviour (I simply checked random functions until I found one that worked).

However, doing this requires the column names to be given explicitly. It's golfier to express them by indexing into the alphabet, but this requires finding a function that maps each of the eight column names onto a different number from 1 to 8 in the correct order. The odds of any given randomly generated function happening to do this are 1 in 16777216. After searching through tens of millions of randomly generated functions, I discovered that function #29699285 happens to have the desired behaviour.

When an appropriate function for converting column names is available, the only remaining requirement is to remove the row number before running the function, subtract from 9 if necessary, and add it back at the end. (The conditional subtraction from 9 is done by conditionally negating it, and then taking its value modulo 9.)

This is assuming @ECHO OFF is enabled. The second arg is the string (ie QR1), and 1st is the side. 0 for white, 1 for black. For example on CMD, if file is named chess.bat

returns a1. I use the built-in variable =exitcodeAscii to get the letters from a-h, the rest is just a simple FOR loop.

Takes in the integer 0 if it's white's move, 1 if it's black's move, along with the notation string. Returns a string.

Not much of an explanation, but here's the code separated into a series of steps:
Share
Improve this answer
edited Jul 14 at 22:07
answered Jul 13 at 0:15

For each column away from the centre, update the letter, e.g. QR ↦ dR ↦ cN ↦ bB ↦ a.

Takes a boolean (0/1) and a string as command-line parameters (-2 bytes by abusing the input format to take 0 or 7 as the first parameter). Explanation:

Get the second parameter into a variable so that we can slice it.

Calculate the descriptive row from the algebraic row by XORing the 0-indexed row with 0 or 7 as appropriate.

Based on my answer to the linked challenge, loop over the pairs of descriptive and algebraic columns and output the algebraic column corresponding to the descriptive column. Note that echo ignores most punctuation immediately after the o which I use to consume the . that's part of the ~x extension, saving 2 bytes.

Inputs in the order notation,perspective, where the perspective is 1/0 for black/white respectively.

See this 05AB1E tip of mine (section How to compress strings not part of the dictionary?) to understand why .•7œΔ&‘• is "cbaefghd".

Testing out dictionary interleaving idea which is a little shorter than converting to ascii codes with chr. "Q" and "K" have to come first, otherwise they will match for at "QR".

-4 bytes using find instead of index and a better rank calculation for white/black.

Try it online! Link is to verbose version of code. Takes the White/Black flag as a boolean. Explanation:

Look up the column in a compressed table and output the lowercase letter with that index.

Subtract the row from 9 if the player is Black.