Within the Forest section of the first chapter of Deltarune, there are a few puzzles that consist of entering playing-card suits in a certain order to move to the next section. Below is an example of such a puzzle: 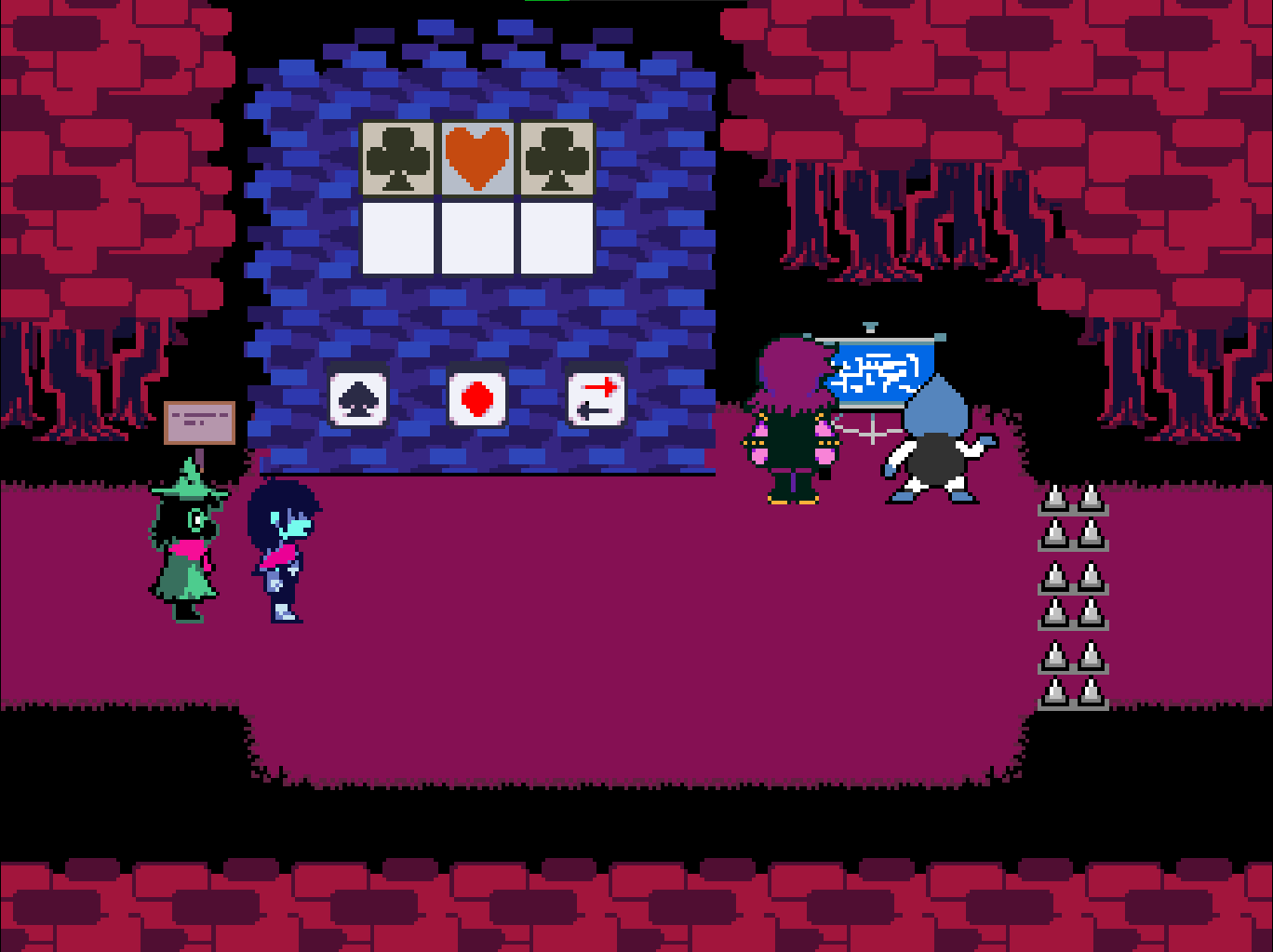 The way to solve the puzzle is to do any of the following until the input pattern matches the required pattern: a) add a spade, b) add a diamond, c) toggle the suits of the already inputted pattern (spades goes to clubs and vice versa, hearts goes to diamonds and vice versa).

The solution to the puzzle in the picture is:

a) Add a spade

b) Add a diamond 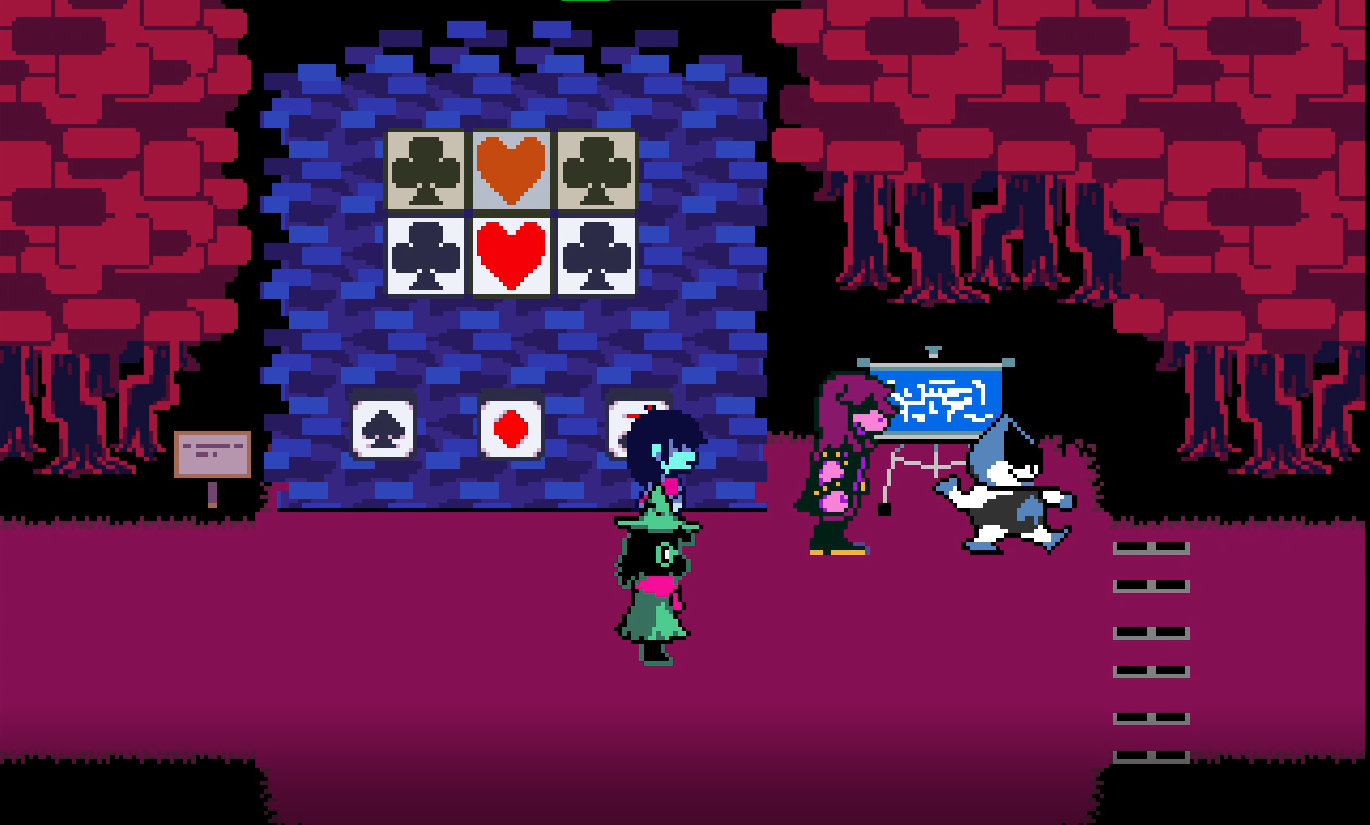 Here's a video version of the solving of the puzzle

Say the required pattern was diamond, heart, club, spade (DHCS). We first add a heart to the input, as the first item will have to be red in some way:

We then toggle the suits so that we have heart as the first suit.

We then add a diamond to complete the first two suits.

We add then add a spade.

And invert the suits one last time.

Finally, we add the spade and the puzzle is complete.

As this is code-golf, the aim of the game is to use as few bytes as possible, as you never know what Lancer and Susie will do next.

TDT inserts an H without changing the overall toggle state.

TST inserts a C without changing the overall toggle state.

Remove consecutive toggles, as they're not allowed. (Would have saved 4 bytes if they were allowed.)

Works as either a function or a full program. Input format is a list of numbers, 0, 1, 2, 3 for diamonds, spades, hearts, clubs respectively. Output format is a string of '0' for diamonds, '1' for spades, and a space character ' ' for a toggle. (The TIO link contains a footer which wraps the output in double quotes, so that trailing spaces are visible.)

Mathematical algorithm for solving this puzzle

This is a closed-form algorithm that produces an optimal solution directly in linear time, using mathematical properties of the puzzle rather than any sort of brute force. The basic observation is that we can split the suits into two groups, the "writable" suits diamonds and spades (which have numbers 0 or 1, i.e. return true from Jelly's Ị builtin), and the "unwritable" suits clubs and hearts (which have numbers 2 and 3, i.e. return false from Jelly's Ị builtin). For any two positions in the string (either the string we're trying to create or the string we're working on), it's possible to define a "writability difference" – 'same' if the two positions contain suits with the same writability, or 'different' if the two positions contain suits with different writabilities.

Expressing this algorithm in Jelly

The core of the algorithm can be expressed in Jelly by looking at the list of writabilities (Ị), and grouping it into blocks of consecutive equal writabilities (Œg). ṁ is then used to copy the shapes of the blocks onto the original list, which is reduced to a list of red (0) / black (1) using Ḃ. The resulting list can then be joined on anything other than 0 or 1 in order to add the toggles (as a toggle needs to be put anywhere there's a writability difference of 'different', i.e. the writability changes, and that happens at the gaps between the blocks); joining on spaces (K) is tersest as that has a single-character builtin (even though it makes the output a little hard to read, that isn't a requirement of the question).

This doesn't, however, handle the requirement to add an extra "toggle" at the end if the last suit is unwritable. The tersest way I've found to implement this requirement is to append a 1 to the list of writabilities (;1), which (due to how ṁ works) effectively adds "a copy of the first suit but writable" to the end of the list of suits we're creating, and then remove it the added suit again at the end of the program (h-). This is a no-op if the last suit in the desired output is writable. If, however, the last suit in the desired output is unwritable, this creates a writability difference of 'different' which will lead to an extra toggle instruction being added between the last requested suit and the added suit; and when the added suit is deleted, the toggle instruction won't be. Both cases therefore end up with the desired result, with no explicit if statement needed.

The input is a list of integers, and the output is an integer where each digit read left to right represents a possible move.
For input: clubs, spades, hearts, and diamonds are 0, 1, 2 and 3 respectively.
For output moves: spades, diamonds, and toggle are 1, 3 and 5 respectively.

If a number is not a valid output format, then the answer is 76 bytes:

It's a recursive function that works from the end of the list to the beginning. t is a toggle flag -- it's -1 when the output will become either a heart or a club, and 0 when the output will be either a spade or a diamond. We append toggles until the end value and toggle bit have different odd-ness/even-ness, then append the associated move (spade if end value is spade/club, diamond if it's diamond/heart).

A recursive solution, which I believe also finds the optimal solution. Uses 0 through 3 for clubs, spades, hearts, and diamonds, and uses 4 for toggle, and 1 and 3 to add the respective cards.

Port of Jelly, so go upvote that.

This should be 9 bytes: https://github.com/Vyxal/Vyxal/issues/1285

7
Implement strategy for Jacks or Better Video
23
Name the poker hand
19
Who wins a Spades trick
28
Argyle ASCII Art
35
Solve the chromatic puzzle
6
Golf me a card dealer
20
Help the dealer rebuild the deck
30
Which Card is it?
35
Generate a deck of cards
21
Is this a straight flush?