In the hovertext of this xkcd: 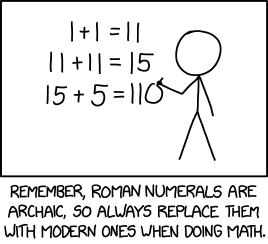 There's an "encoding" based on replacing runs of roman numerals with their sums. To do this:

Your challenge is to implement this, given a string. This is code-golf, shortest wins!

Note: the xkcd implements some more complex rules regarding consecutive characters like iv. This can create some ambiguities so I'm going with this simpler version.

Try it online or run a test suite.

Needs modern Factor for >dec. Here's a version that runs on TIO for 3 more bytes, though: Try it online!

This answer relies on try in order to process heterogeneous arrays relatively succinctly, as roman> blows up on non- roman numbers and sum blows up on arrays of strings.

Definitely not the best tool for the job, despite built-in roman numerals.

Or alternatively, with I/O as character array:

Can definitely be golfed a bit. But despite having a Roman Number builtin, the functionality of some builtins are nowhere near as versatile as the Vyxal answer.. Why you might ask?

Start with a running total of 0.

Loop over the input characters, but include a trailing empty string.

Get the index of the uppercase character in the list of Roman numerals.

If this is a Roman numeral, then...

... use the index to convert it to decimal and add it to the running total, otherwise:

Prefix the running total, if any, to the character before printing it.

Matches runs of roman numerals and replaces them with their sum. The 2 at the end is equivalent to re.IGNORECASE.