In this king-of-the-hill challenge, you will program a bot, consisting of a python function of the form

Specifically, the function must run in python3.9. Each bot will be entered into the contest 10 times.

The arguments it take in are info, me, round. The three arguments take in: [[bot_func,score_int,freq_float] for bot in bots], bot (whichever bot who has the current turn), and round_number. The argument names don't matter, but the order matters.

Each play, this bot can either

A bot returns an ordered iterable:

[Bot, as a function,1 for frequency, 0 for score,1 for increase, 0 for decrease]

It can access a list of all the bots in the games' functions + current scores + current turn frequency, including itself, represented as [bot_function, score_integer, frequency_float]. Additionally, it will receive itself, so it can differentiate itself from other bots. It can also access the round number (from 1 to 10,000).

This challenge is based off of an idea 23TuringMachine (Which Is Me) had in chat. NumberBasher did the editing, programming, and brunt work of it.

Additionally, feel free to discuss in the official chat room. 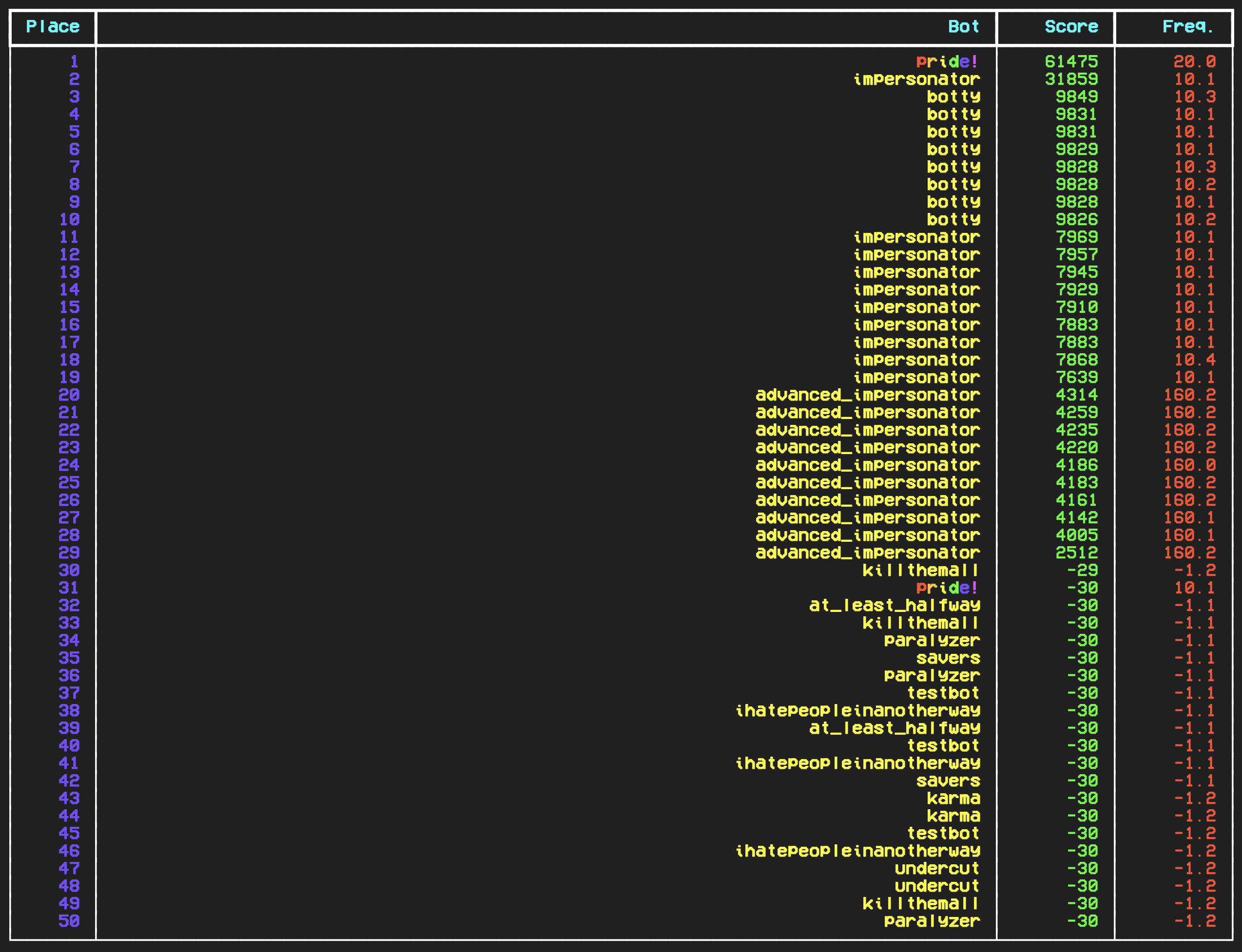 We now have an official chat room!!!

Not sure if this loophole is allowed. Since many bots help those with similar names this impersonates the top bot by name.

I don't think this counts as exploiting the controller, but let me know if you think otherwise. The entire mechanism that allows bots to know each-others names seems like a bit of a abuse of mechanics and this counters that strategy.

Contents itself with taking places 2 through 9. It used to do so basically by using 10 bots to push 8 bots up in the ranking. Now it does so by building a small buffer of frequency, and then paralyzing all the other bots (amongst the other bots with positive frequency, it finds the bot with lowest score, and then attacks the bot with the lowest frequency that has the same name). Once all other bots are paralyzed, it's free to do whatever it wants.

No time for losers :)

I hate people in another way

Copies the behavior of a random bot in the top 25%.

Slows down bots that would do bad things to other bots.

This bot wants to end up at least above average on the leader board. So it'll look for the middle scoring bot in the list (excluding itself†), and will increase its own score if it's below that middle scoring bot. If it's already above it, it'll decrease the score of the bot directly above itself.
To be save, it also tries to keep its frequency above 3, and will increase its own score in the last 100 rounds.

† Not sure how this works when more than one at_least_halfway-bot is competing in a round. Currently it filters itself out based on the given me, although I might change it based on name (even though that's more easily abusable, as can be seen with the Impersonator bot).

Not the answer you're looking for? Browse other questions tagged king-of-the-hill python or ask your own question.