The brilliant engineers at <enter company you love to hate> have struck again. This time they've "revolutionised" the generation of random permutations. "Every great invention is simple" they say and their magical new algorithm is as follows:

Then they "prove" that this is unbiased because each element occurs at each position with equal frequency.

Obviously, their reasoning is flawed because their method has n^n equally likely outcomes which typically is not a multiple of n!

Your task is as follows: Write a program / function that accepts a list / stream / generator / iterator (whatever makes most sense in your language of choice) of permutations and decides whether they are a biased sample as created by the algorithm above or not. If not you may assume that the sample is unbiased.

n will be 3 or more. You can set a minimum sample size as you see fit,

Your program may err on small samples but must converge to the correct answer as the sample size increases.

Apart from that standard rules apply.

Now that @AndersKaseorg has let the cat out of the bag I see no harm in giving a few more hints.

Even though it may look plausible at first sight it is not true that elements are uniformly distributed over positions.

5 can be used to solve this challenge in a similar but perhaps slightly less golfable way to Anders's answer.

Computes the fraction of samples where the first entry is less than the last entry. For unbiased input, this converges to \$\frac12\$.

For biased input, the last entry is uniform, but the first entry is less than a uniform one with probability

This calculation ignores a slight anti-correlation between the first and last entries for \$n ≥ 4\$, but we can bound it and show that it’s much too small to affect correctness. Here are the exact probabilities computed by dynamic programming. 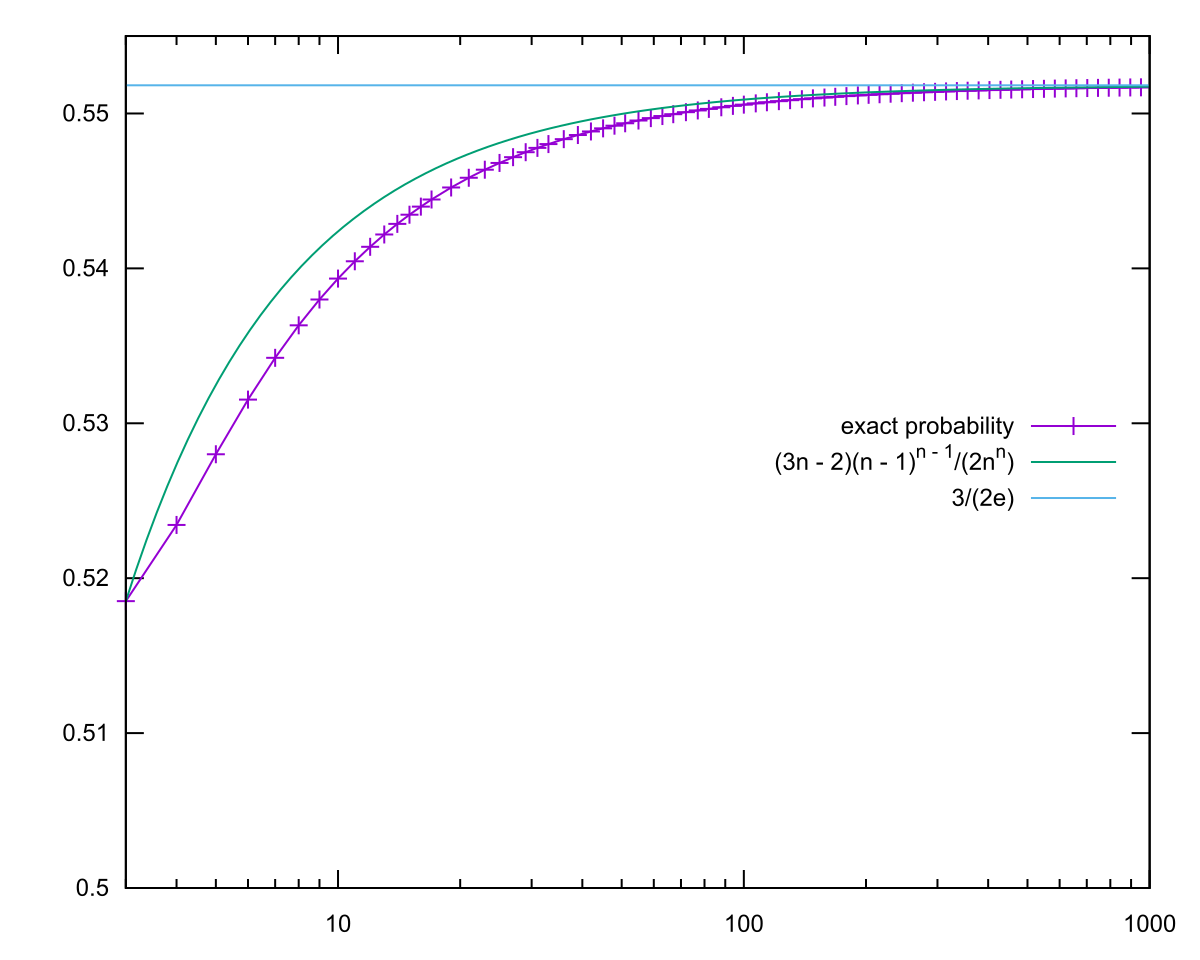 Edit: -12 bytes thanks to Giuseppe, and -6 bytes and corrected (I hope) maths thanks to Anders Kaseorg

Input is a matrix m with each row representing a permutation.

We guess that sampling is biased if the variance is greater than twice the mean. Simulations indicate that this is sufficient to detect biased samples with n=3, and the difference becomes bigger (so, easier to detect) at larger n. As n increases, though, the number of permutations needs to be quite large for the guess to be reliable.

Addendum: Note that a port of Anders Kaseorg's approach, which is much better tailored to detect exactly this type of biased permutations (rather than simply any biased set of permutations) is 19 bytes shorter:
function(m)mean(m[1,]<m[max(m),])<.51 (try it).

Try it online! Link is to verbose version of code. Outputs - if it thinks the list of permutations is biased. (Test case consists of 768 biased permutations of four elements.) Explanation:

A port of @AndersKaesorg's answer would be just 16 bytes:

Try it online! Link is to verbose version of code. Outputs - if it thinks the list of permutations is biased. (Test case consists of 256 biased permutations of four elements.)

Not the answer you're looking for? Browse other questions tagged code-golf combinatorics random open-ended-function statistics or ask your own question.