Note to those without experience in music: Through making an attempt to solve this problem, you may find that music and computer programming are similar in the ways that they implement rules and syntax. With some help from Wikipedia, you can likely solve this problem with no prior knowledge of music theory.

Write a program that can take a string representing any valid key signature (ex: C, D#, Ab) and return the appropriate chord progression for a 12 bar blues in that key.

Many aspiring jazz musicians begin their musical journey by learning the 12 bar blues. It is a popular chord progression that consists of the I, IV, and V chords of a key.

There are a few variations of the 12 bar blues, we will use the following:

Where each numeral represents the chords of the given key.

Note: In music, you can write some notes two different ways. (ex: F# is equivalent to Gb). Consequently, a given input may have multiple valid answers. An answer is correct as long as it outputs chords that are correct, regardless of how they are represented.

Answers should be returned in one of the following formats:

This is code-golf: The solution with the fewest bytes wins.

Doesn't accept # ones. Uses flats only.

Takes input as notes in lowercase (db not Db or C#, this doesn't allow sharps)

B6:E8 are blank for the cells corresponding to the I chord; are 5 for the IV chord; and 7 for the V chord. (4 bytes) G:G contains the list of keys both sharp and flat. (27 bytes)

The first character of input string pointer is converted to a semitone scale relative to A, based on the table [0,2,3,5,7,8,10]. The pointer of this table is actually offset by 0x41 (ASCII 'A') so that the index is the ASCII value, eliminating the need to ASCII convert to 0-based index in the program. The second character's ASCII value is checked and if it's less than a '#' (ASCII 0x23) (white space, CR/LF, null, etc), the note is natural. If it is a '#', 10 is subtracted from the value followed by adding 11, for a net +1 (this is a machine code optimization to eliminate the need for a branch/jump). If it's a flat, the subtraction of 10 is skipped and only 11 is added, for a (relative) net -1. The remaining number is the input note's number of semitones relative to A -- the key, effectively.

Next, the "song" is loaded from a packed array of bytes [0x40,0x25,0x20,0x17,0x15,0x20] where the first nibble is the number of times the bar repeats and the second is the relative number of semitones up from the tonic. That number is added with the key from earlier and mod 12 to handle wraparound, leaving the root note of the chord transposed to the correct key.

Last, the note is compared to the semitone table again. Searching from the end, if it matches, the note is natural. If it's lower, the note is one note name lower and sharped. Output is then written as an array of two byte strings to the buffer passed in [DI].

Port of @emanresuA's Vyxal answer. It also only uses lowercase inputs without sharps; and outputs (in lowercase) as single list.

Saved 2 bytes thanks to Axuary

Screenshot shows the 125 bytes version of the formula.

Got just one instruction; that's all I can use.

Try it online or run the test suite. Input is an uppercase letter possibly followed by an accidental (# or b). Output is enharmonically correct. Inputs of Fb, B#, or other non-standard keys that require double sharps or double flats are not supported.

Prelude is a 2D language inspired by music. Each line, known as a voice, has its own stack. Instructions in the same column are executed simultaneously, representing notes sounding simultaneously in different voices. Loops, demarcated by () pairs, run in parallel across all voices. There are no conditionals but testing for equality to zero is possible with loops.

Our strategy, therefore, is to get \$+3\$ or \$-4\$ on the stack as appropriate, then add this to \$c_\text{I}\$. Because there is no direct way to test whether \$c_\text{I}<69\$ in Prelude, we have to resort to a series of nested loops that function like conditional branches. The code between dashed lines below is only executed if \$c_\text{I}\ge69\$.

Notice that in the inner section, we have to do #7-0 rather than just 4- because in the latter case, the stack would be [3, -4] and the loop would not terminate. (Loops terminate only if \$0\$ is on top of the stack.)

Musically speaking, there are only four keys for which we cannot simply copy the accidental from chord I to chords IV and V. These keys are F (chord IV Bb), F# (chord IV B), B (chord V F#), and Bb (chord IV F).

Note that for the following explanations the code runs vertically, with Voice 5 in the left column and Voice 6 in the right column. (This vertical format is used to maximise readability of the comments, but isn't a valid way to write Prelude code.)

Printing the progression is an exercise in stack management. The goal is to get all of the \$c_j\$ onto one stack (Voice 2) and all of the \$a_j\$ onto another (Voice 5), then churn them all out in a single loop. There's more than one way to do this, and the code went through several iterations before I settled on the current order of voices.

The print loop is spread across two voices and is notable for the fact that the starting ( and ending ) are not in the same voice (a byte-saving optimisation). The ! in Voice 2 prints each of the letters \$c_j\$. The accidentals \$a_j\$ require special treatment. For any \$a_j=0\$ (corresponding to a natural note) no character should be printed, but a bare ! will print a null byte. The way around this is to use (!0)# to print only if \$a_j\ne0\$. Finally, a separator is needed. It's cheap to push and print a tab (codepoint \$9\$) on demand. 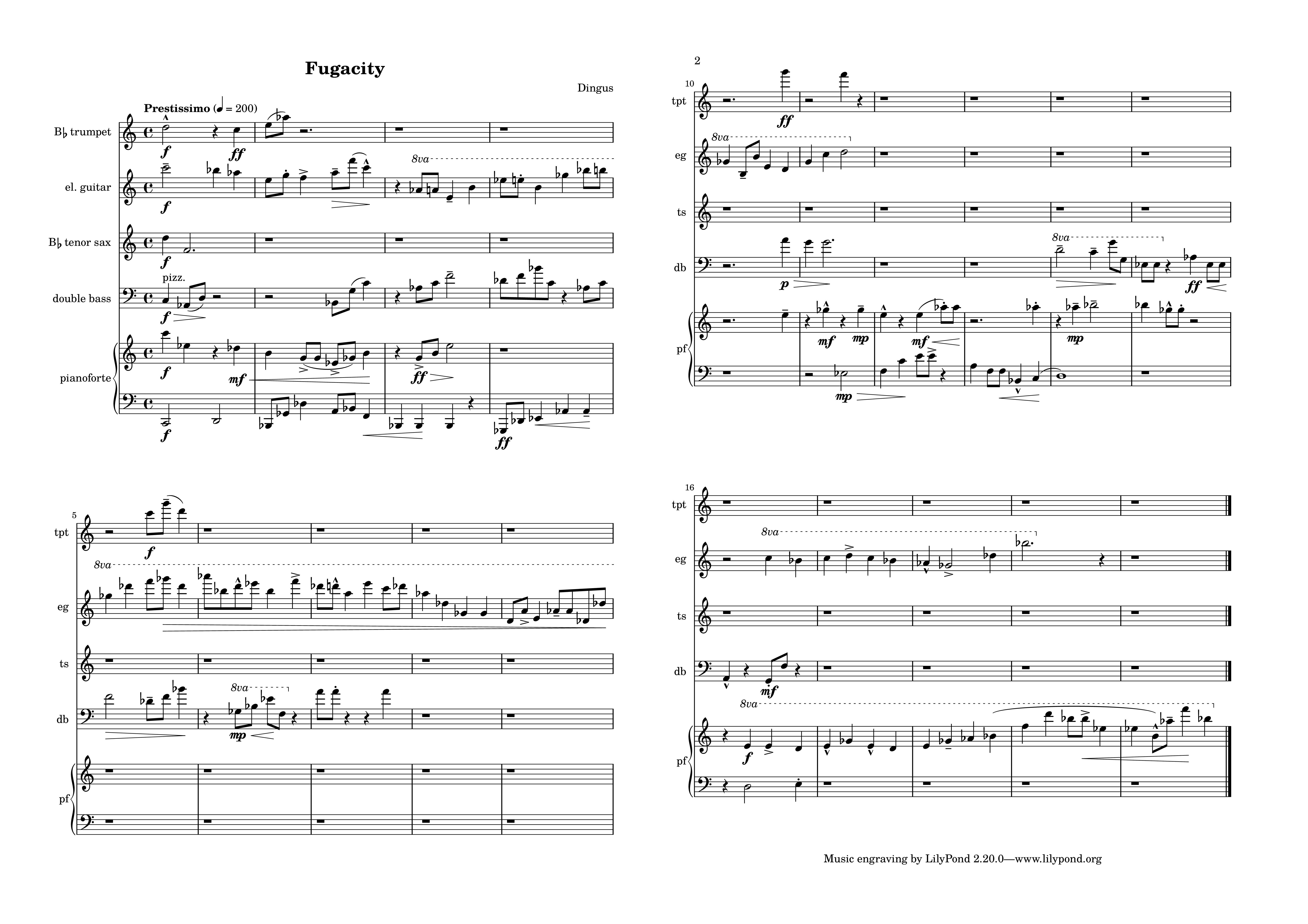 Fugue and Prelude are dual languages: Fugue uses musical notation to encode Prelude instructions. I'm not sure how it should be scored (no pun intended) but I'd suggest that the byte count of its Prelude twin (above) is a reasonable measure.

The musical score was generated from the Prelude source code using a custom Ruby script to metaprogram the LilyPond engraving. You can listen to the MIDI or view the PDF score, Ruby script, and LilyPond source on Github. There is a very old Fugue compiler that reads MIDI files as source code, but I was unable to get it to work.

The piece, titled Fugacity, is scored for trumpet, electric guitar, tenor sax (two-note cameo), double bass, and piano. (The choice of instruments is artistic and arbitrary as far as Fugue is concerned.) How does it sound? Not at all bluesy, but I've definitely heard worse.

All voices are padded to the same length with rests, which isn't necessary for Fugue but does make the score a bit nicer to read.

With this basic score to work from, some artistic embellishments are introduced for increased musicality. The following adjustments occur automatically:

The first note in each voice is arbitrary. I toyed with several ideas but finally settled on a unison C. It's interesting to hear how the parts diverge from a common starting point.

Expects a string in [A-G][#b]? format. Returns a list of strings in the same format.

Make two copies of the input, with space and newline as separators.

Transpose the first copy down a fifth.

But F transposes to B♭.

Transpose the last copy up a fifth.

But B transposes to F♯.

Cancel out the sharps and flats if transposing F♯ to B or B♭ to F.

Try it online! Link is to verbose version of code. Outputs all chords on one line. Enharmonic-free, but uses ## instead of x. Explanation:

Split the compressed string 111100112011 into digits, decrement each, and add on the index of the input in the list of fifths, adding 7 for each #, and subtracting 7 for each b. Loop over the resulting list.

Output the appropriate number of sharps or flats.

Leave a space between chords.

An anonymous function taking a flat, sharp or natural key signature as an argument n and outputting the following chords in order to keep with the convention of naming major chords as flats to avoid double sharps. (Chords are listed here as a circle of 5ths: B E A D G C F Bb Eb Ab Db Gb; note all the natural notes come first with the flats together at the end.)

n.ord*2%7 finds the letter in the input. The ASCII code for F is 70 so this becomes 0. G is 2 steps further round the cycle of 5ths and becomes 2, while C fills in the gap with the value 1

n[-1].ord/32*7 adjusts for flats and sharps. If the last character of the input is an uppercase letter (i.e. same as the first) it evaluates to 2*7. If it is a lowercase b it evaluates to 3*7 and if it is a symbol like # it evaluates to 1*7 . A few bytes could be saved if only handling flats is required, because it will enable a count of the length of the string to be used instead of checking for the difference between # and b

Internally, B is assigned the value 0, F is 6 and Bb is 7. To take advantage of Ruby's wraparound index on the string BEADGCF, -7 is subtracted from all values when indexing the string.

25
Generating guitar tabs?
5
Create a function for transposing musical chords
15
The Major-Minor Dichotomy
41
Music: what's in this chord?
10
Music: What's the name of this chord?
6
Black or white keys of jazz chords?
21
What did I just play? Translate guitar fingerings to chords
9
Piano Chords on White Keys
6
Generate chord charts for ukulele