Is this continuous terrain? Part II

You're given a piece of ASCII art representing a piece of land, like so:

But unlike in the previous challenge, the terrain is mountainous, with caves and cliffs, and can turn back on itself. Also, a new character is introduced, |, which can connect to any of its four corners.

Your challenge is still to determine if it is connected by the lines of the characters such that a single line connects them all without backtracking or crossing itself. For example, the above can be traced like so: 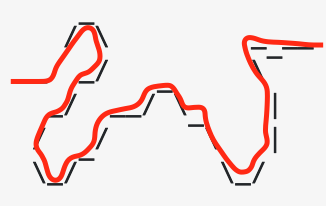 To clarify the connections:

That one's a bit confusing, so the following are legal:

And the following aren't:

It doesn't matter where the connections start and end as long as they're all connected. Note that one line's bottom is the next line's top, so stuff like this is allowed:

You can assume input will only contain those characters plus spaces and newlines, and will contain at least one non-space character per column.

Input can be taken as ASCII art, an array of rows, a character matrix, etc.

Try it online! Link is to verbose version of code. Takes input as a list of newline-terminated strings and outputs a Charcoal boolean, i.e. - for continuous, nothing if not. Explanation:

Loop over the rows of the terrain.

Start each row on a new line. This is because we'll be drawing above the current line, so we want the actual drawing to start at row 0.

Loop over each character of the row.

Space the characters 3 apart. (This should be one before and two after, but unfortunately Switch makes doing that less golfy.)

... output a marker in case the character above or below is a |.

Switch on the current character.

If it's a _ then write to the centre and the bottom left and bottom right corners of this 3×3 square.

If it's a ‾ then write to the centre and the top left and top right corners.

If it's a / then draw from the bottom left to the top right.

If it's a \ then draw from the top left to the bottom right.

Add another two rows so that each row is spaced 3 apart vertically as well.

Jump back to the beginning.

Loop through the rows and columns as before.

This time, only process | characters.

Check all 8 directions. (Actually directions 0 and 4 are useless, but it's easier to include them.)

If so then draw a connection to it.

Start collecting points that do not have two neighbours.

Loop over each cell of the canvas, taking into account that it's offset by 2 characters to the right.

Get the number of neighbours of this cell.

If this cell is not empty and does not have two neighbours, then...

If there aren't exactly two points with exactly one neighbour each, then...

Jump to one of the two ends.

While there is an adjacent character...

... erase the current character and move in that direction.

If there is more than one character left, then...

... clear the canvas and output success.

Not the answer you're looking for? Browse other questions tagged code-golf ascii-art pattern-matching or ask your own question.

95
Would this string work as string?
17
Is this continuous terrain?
21
Can you draw this in one stroke?

15
Make me an alphabet tree
10
How many trees in the Alphabet Forest?
31
Area of an ASCII polygon
20
Is This a Real Tree?
19
Given a Diagram, Find X
21
Hexagonal Triangles!
95
Would this string work as string?
17
Is this continuous terrain?
15
Sides of a polygon
21
Can you draw this in one stroke?