In this challenge, you'll create some programs which behave similarly to genes. When you run one, it will return one of its two "alleles" (a half of its source code), and concatenating any two alleles from your programs will result in a new, functioning program (which returns its own alleles).

One possibility if you had multiple generations, starting with three programs, could look like this: 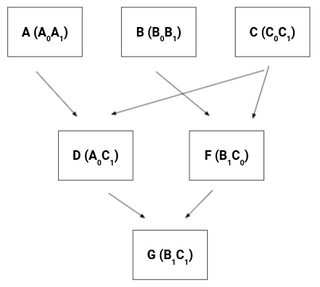 Note that standard quine rules must be followed, so the genetic quines should not read their own source code, and alleles should be non-empty.

The random choice must have a uniform probability of choosing either quine, and the quines must follow standard rules (so non-empty). You may not use the current time (directly) or some undefined behavior for randomness; a properly seeded PRNG or source of randomness should be used.

I've built a way to make an arbitrary number of alleles which grow in length at a rate of \$O(\log(n))\$ So you can add as many of them as you want to the bonus to asymptotically approach 0. I would have to do a lot of math to figure out what the exact optimum number of alleles is, but I can do at least 52.

The following is the base allele:

To get other alleles:

You can use longer names too to get as many alleles as you want.

Each allele is also a quine on it's own, which is fun!

But even more fun, you can also concat as many alleles as you want together and it will output one of the given alleles randomly. Unfortunately later alleles will be less likely than earlier alleles if you do more than 2.

* Since it's basically impossible to import stuff properly with the allele stuff going on I take the import via command line flag.

Another set of tweaks is in the operation 95*2+. You can swap the order of operations of the multiplication (59*2+) or the addition (295*+), or rewrite the entire expression as 85*7+ or 76*5+. All of these things are independent of each other, so there are 3*2*2 = 12 ways of writing the same expression. You can also (thanks to Jo King in the comments for pointing this out), write it as :4*7+. Because this depends on the stack before the instruction is executed, it can't be combined with any other permuters, so only adds one more way of writing the expression, bringing the total to 13.

I'm sure someone more familiar with the language than me could write even more of these trivial tweaks.

Similarly to the Haskell answer, you can concatenate any number of alleles together rather than just two, and one of them will be chosen uniformly randomly.

As an example, one could consider program A to be:

and Program B to be:

Other alleles can be created by replacing the char A by (almost) any char (except simple quote ', double quote ", backslash \, newline, line feed, tabulation, and null char)

When come the second allele, id is no evaluated as False and a store the first allele.

Heavily based on the JavaScript answer

Try it online! Link is to sample program of two alleles. Any of the 22 variables αβγδεζηλμνξπρςστυφχψω can be used in place of θ. (I think it might also be possible to replace the third and sixth Ｆs with ⭆ to double the number of alleles but I haven't tested this. I think I could have also started with the Charcoal quine of the same length from Minimal distinct character quine which would give me a further set of 25 alleles, since that quine doesn't use the ι or κ variables.) Explanation: Mostly based on the Charcoal quine from Golf you a quine for great good!.

Assign the string θＦ‽⎚Ｆ¬ⅈ«´≔Ｆθ⁺´´κθ» (a suffix of the entire allele) to a variable.

Clear the canvas 50% of the time. (This is only relevant to the second allele, since it's always clear when the first allele runs.)

If the canvas is clear, then print a ≔, then print the variable twice, the first time prefixing ´ to each character.

Note that if multiple alleles are concatenated then each has half the chance of the previous allele of appearing except the last allele which has the same chance as the penultimate allele.

«Genetic diversity» comes from global variable name («a» - «z») and paired delimiters for %q string notation ((), [] and {}). Non-paired delimiters (as well as ') won't work since they have to be the same inside. And other % notations won't work due to interpolation.

Try it online! (the line break is here only for readability, it should be removed)

Ends with an error, I believe it is allowed (not so sure for quines?)

Not the answer you're looking for? Browse other questions tagged code-challenge quine source-layout or ask your own question.