Basically the tron light-cycle game as a king of the hill competition! 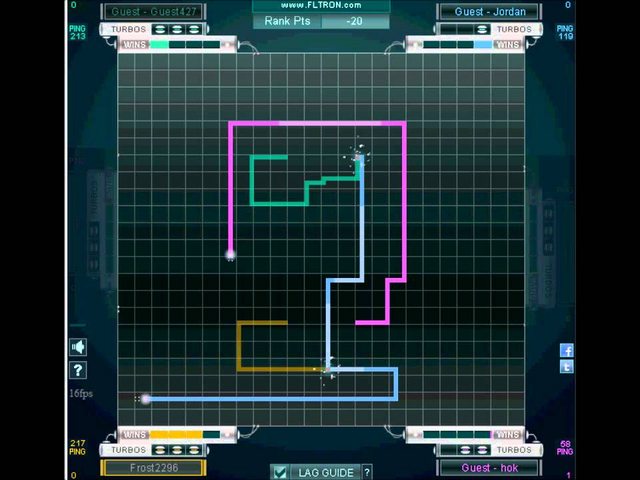 Players will write bots that compete in a light-cycle tournament. A round of light-cycle starts with bots evenly spaced out along the edge of a rectangular play area:

Each turn, each bot simultaneously must choose one of 4 directions to step (N, E, S, or W). The "head" of the bot steps in that direction, and the space that was once occupied by the head becomes part of the "body".

The round ends as soon as one or more bots crash into a wall, or into the head or body of another bot (including its own body).

The bot(s) that crashed into the wall will be eliminated, and a new round will start with new starting positions. Bots are eliminated each round, until only 1 bot remains.

The leaderboard rankings are based on the order that the bots are eliminated.

For ease of judging and creating the judge website, submissions will be restricted to javascript.

A bot is a javascript function with the following API:

Coordinates: (0, 0) is the bottom-left corner of the playfield with x increasing to the right and y upwards.

Edit: Opening a PR in GitHub is no longer necessary, simply post your submission here.

Each user may only make one submission, however you may freely edit your submission after posting.

Space Finder checks each adjacent space to determine which is attached to the largest empty area. If it has multiple choices, it avoids other heads.

Much like 'Blind Bot', but tries to avoid head-on collisions by turning if another bot could collide with it. Tries to go West and hold on that side of the screen.

Bot that simply checks each of the 4 adjacent directions, and goes in the first direction that is empty. Just to get the ball rolling for now, I may or may not edit this submission in the future.

This bott simply tries to avoid collision with other bots. Also, runs east instead of north as default, just to spice things up.

Not the answer you're looking for? Browse other questions tagged king-of-the-hill javascript or ask your own question.