A triangle of numbers

Let say we get a numbers in the form of ab, for example 12. We then create a triangle like below: 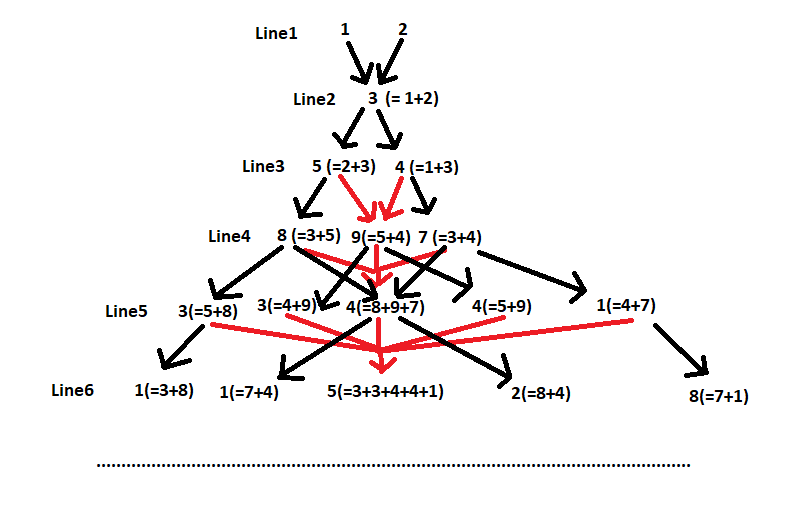 Sorry for my bad drawing!

It should print out:

Have fun and good luck!

Note that I will select the winner after 4 more hour since the time edited.

Based on OP's code

Input the two digits, reverse them, split them, and cast to integer.

Push the reverse of this (i.e. the original integers) to the list of results.

Add the two together, giving the third row. This is also the first row that takes part in diagonal calculations.

Concatenate the second and third rows.

Rotate the result and add it elementwise to produce the fourth row. This is also the second row that takes part in diagonal calculations.

This is also the last result so far.

For the remaining rows...

Calculate the diagonal sums before and after the sum of the previous row, thus producing the next row.

Shift all the rows back one, removing elements that do not participate in the diagonal sums.

Output just the last digit of every element.

-3 bytes thanks to Dion

After fixing a bunch of bugs :), i come up with this:

The first 12 and 6 is the input, all other number is output.

A set of links taking the left argument as the number of rows and the right as the initial integers. Returns a list of lists of integers.

If the IO is inflexible, here is a solution for 56 bytes that takes the arguments in the opposite order, the starting point as a single integer and prints the number triangle to STDOUT.

This uses lists of digits as I/O, 56 bytes with the format in the challenge. The output is built row by row in the global array:

Expects (N)(n), where N is the initial number as a string and n is the number of lines.