Given a non-negative number, check if it's odd or even. In case it's even, output that number. Otherwise, throw any exception/error that your language supports, and stop the program.

The expression n%-2 equals 0 for even n and -1 for odd n. Bit-shifting n by 0 positions leaves it unchanged, but for -1 positions it gives an error for "negative shift count".

M is an atom meaning "Given a list, yield the indices of that maximal elements". Now, typically, when given integer arguments to its array functions, Jelly promotes them to either a range, to digits, or just wraps it. Unfortunately, (I'm guessing due to M's age - it was one of the earliest builtins in Jelly), M doesn't do this, and throws an error as it can't iterate over an integer.

How the code actually works:

If the input is odd, then Ḃ yields 1 and ¡ runs M once, which is enough to error it

This code is built around Hexagony's # operator. Hexagony initializes with 6 IP's, 1 in each corner of the code box, with the 0th one, the one in the top left, being active in the beginning. The # operator takes the value of the current memory cell mod 6, and then sets the corresponding IP as the active one. So making an even/odd checker is a matter of using the # operator and then having IP's 1,3, and 5 perform the 'odd' action, and IP's 0,2, and 4 perform the 'even' action. The consequence of doing it this way is that there are 6 separate paths that each need to be mapped to the correct endpoint, hence the mess of paths. In this case, the odd action is : (attempt to divide two non-existent values, resulting in a divide by zero error) and the even action is !@ (print and terminate). To make it hopefully a bit more readable, here's a very low-tech drawing of the paths: 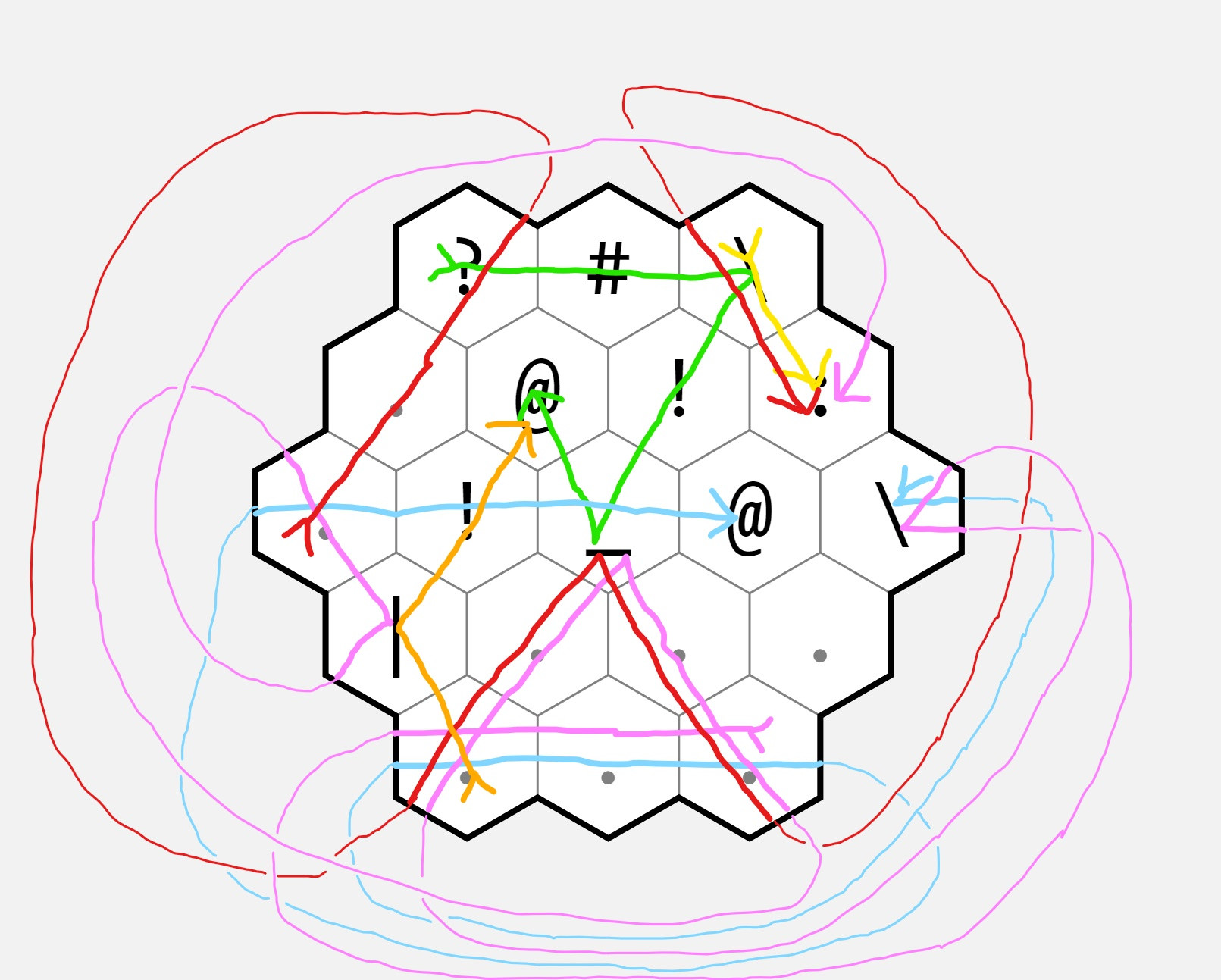 I'm pretty confident 12 bytes is possible, and potentially even shorter. Not sure if there's a better approach entirely, but with this method, it seems just about brute-force-able. It seems it should only require ?,#, no more than 3 each of @,!, and :, and some control flow characters.

If you don't like hlt because you don't think that counts as throwing an exception/error, then replace it with an int 3 instruction, which is also only 1 byte (0xCC), and thus doesn't change the overall code size (5 bytes). The int 3 instruction is the trap to a debugger.

The only way you could really argue that this code is cheating is that it doesn't "output" that number. I'd say it does: it allows execution to continue past the point where that number was generated, which is a lot like outputting it. You don't get any output for odd inputs; you can only get output for even inputs. Besides that, I think this is allowed by many, many different agreed-upon input/output methods.

A division by 0 is another obvious solution, but it doesn't save any bytes. Even if you are willing to allow clobbering the input value, in order to arrange for a division by zero, you have to negate somewhere (either the original value, or the isolated LSB), and that requires an extra instruction (either XORing with 1, or a NOT), which means 2 extra bytes.

That's 6 bytes, and I'm not even sure that I can figure out how to justify this clobbering of the original input value as being consistent with the requirements of the challenge to "output" the value.

To avoid clobbering, there are a few different options. For example, we can stipulate that the input is taken in a different register (say, ECX). But this means that we can't use the short "implied accumulator" encoding of test and xor, so it costs us at least two bytes. (We could use not with the full register before the test to invert the bits, which is encoded in only 2 bytes, but that defeats the point, which is to avoid clobbering the input.) Or, we could push and pop the input, but that also costs two extra bytes (one for each, push and pop). Maybe I'm missing something obvious, but I'm not seeing a better solution here.

This code basically divides by zero when the input number is odd or by one when it is even.

The ~ character negates each bit of n because n&1 returns 0 when n is even and 1 when it's odd, but we want the opposite: 0 when odd (to make it fail) and 1 when even to return it, so ~ is the easiest way to negate the last bit.

This is the part that reduces n to either 0 or 1. ~n&1 is not exactly the same as ~n%2 because, in Java, %2 keeps the signum of n, and since we definitely swap the signum with ~, we'd always end up with negative number, not matter what n is: if n<0 we'd get negative divided by positive, and if n>=0, we'd get positive divided by negative.

We want to divide by 0 or by 1, nothing else. Only &1 can guarantee that. No matter what, the operator priority will first evaluate ~n so no parenthesis are required.

This bit is weird. Why do we do divide and assign, instead of just dividing? Technically, n/~n&1 will be parsed as x=n/~n then x&1. This is not the behavior we want: n/~n is always equal to 0. What we want is to have n/(~n&1). It could work well, but the whole answer would be n->n/(~n&1). The /= operator is a shortcut to that as it evaluates the right-hand side entirely, so we can get rid of parenthesis, gaining one byte. Assigning is a side effect we can live with.

-4 bytes thanks to Sisyphus

I think this uses an approach that isn't yet represented in the other answers.

Try it online! Here I represents the imaginary number i. Since the square of every even number is a multiple of 4, I^#^2 equals 1 when the input is even, and so 0^I^#^2 becomes \$0^1\$ which is a perfectly nice 0 to add to the input. However, since the square of every odd number is one more than a multiple of 4, I^#^2 equals i when the input is odd, and so 0^I^#^2 becomes \$0^i\$ which throws an "Indeterminate expression " error.

-1 thanks to Aaron Miller

-6 bytes thanks to @mazzy

Calculates the modulo of the input number and 2, implicitly converts the result to a boolean in order to negate it, then divides the input number by the negation. Inadvertently ditched the spec for a while there, sorry!

The && operator is logical AND, evaluating left to right until the result is determined. If n is even then n%%2 is 0, coerced to FALSE, and the a part of the expression is therefore not evaluated. We then output n+0, ie n.

If n is odd, then n%%2 is 1, coerced to TRUE, and we need to evaluate the a part of the expression to determine the result of n%%2&&a. Since a is undefined, this produces an error.

This strategy comes out 3 bytes shorter than Dominic's strategy with if.

thanks to @hyper-neutrino for -4 bytes

The LDVTS tries to make whatever memory page the input points to RWX in the cache, though not in the page table (if the input is one more than a multiple of 8). This is a privileged instruction for obvious reasons.

It's very simple - construct a list with a single (zeroth) number and take an element of it with index equal to that number modulo 2. Since there is no element 1, it will obviously throw an exception on odd input.

There's no need to differentiate odd and even. The criteria say odd numbers can display any error, while even ones should be displayed.

Since the criteria allow for ANY error on an even number, and die() displays an error and terminates, the input is fine as an error.

The criteria allow for even numbers to be displayed in any manner, including as an error, so again, the input is fine as an error.

If warnings are acceptable as errors, then in the comments Matthew Anderson's suggestion to use division by zero also gives us 26 bytes:

Throws a divide by zero error on odd numbers, while returning even numbers.

Here's a slightly longer version that simply asserts the number is not odd:

Not a very hard answer

Try it online! Explanation: If the number is odd, simply keeps appending 9s until Retina eventually runs out of memory, or until TIO kills it, whichever is sooner.

If you want a more direct error, then for 21 bytes:

Try it online! Explanation: Tries to append more than a 32-bit integer length of 9s to the odd input, which throws an OverflowException.

2| the division remainder when 2 divides

Throws a TypeError an overflow error on odd numbers. Still convinced there must be a much shorter way 🤔 /v would work if JavaScript errored on division by 0.

Edit: -2 bytes after looking at ophact's answer, and then -1 byte thanks to Robin Ryder

Throws an 'argument is missing' error when n is odd and the if expression tries to read the missing expression that should be between the two commas.

-13 thanks to Jonathan Allan
-1 thanks to Olivier Grégoire

How ~a&1 works is explained in this solution.

Thanks to tail spark rabbit ear for helping drop one char...

Divides by zero if the number is odd, otherwise the test is truthy and the default action prints the commandline..

È checks if the input is even. Returns 1 for even numbers, 0 for odd numbers.

Unfortunately, since dividing by zero isn't actually an error in Jelly, I cannot use that. Although, it wouldn't save me any bytes: %2C:@ is the same length.

Unlike in Bash, C and many other languages, in Zsh & binds more tightly than / by default, allowing us to get division by zero on odd numbers with just 1 / 1 & ~$1.

(Zsh does have a C_PRECEDENCES option which changes arithmetic binding to the traditional order.)

The input should be put onto the stack using the -v command-line argument.

Try it even!
Try it odd!

Takes advantage of the fact that an R numeric is automatically a vector.

-1 byte by using a different indexing error due to Dominic van Essen.

Try it online (with raw spaces, tabs and new-lines only).

Not the answer you're looking for? Browse other questions tagged code-golf math decision-problem integer error-message or ask your own question.

47
Halloween Golf: The 2spooky4me Challenge!
22
Gamma Function Golf
48
Product over a range
23
Product over exclusive and inclusive ranges
6
It's Not 2015 Anymore!
30
Subsequence Substitution
41
Divisibility test
83
Output the sign
24
Do you make me up?
24
Round up my number