Edit 2: With the recent rules change that allows me to use any string literal for the "congrats" message, I can save 15 bytes from my original 159-byte solution. There's nothing particularly novel or interesting about the new code above as compared to the old code (I just got rid of the p function, and call say directly instead), so the remainder of this post will describe the original code, shown below:

Yeah, I'm abusing the hell out of rule 1. Who needs strings, when you can have barewords? ;-)

The code contains no string literals in a strict sense, so I'd say that rule 1 is, technically, not violated. The trick is that, in Perl, without use strict, any identifier that doesn't correspond to a known language keyword or subroutine will simple evaluate to its own name. The function p then simply takes a list of words and prints them out, separated by spaces.

Edit: Oh, right, the rules say I need to post an un-golfed version of the code too, so here it goes. Technically, it's "de-golfed", since I usually compose my code golf programs in more or less fully golfed form from the beginning, and it can sometimes be tricky to remove all the "golfy" optimizations without fundamentally changing how some parts of the program work. Still, I've at least tried to add whitespace, comments and more meaningful function / variable names:

Ps. As an alternative, if just using barewords instead of strings feels too cheaty for you, here's a 182-byte solution that doesn't use the letters TOLWHIG even in barewords (but does use them in a transliteration operator). It still gets the same bonuses, for a total score of 182 − 350 = −168 points:

The output looks exactly the same as above. Per the (original) rules, I do use the letters t and i in printing the rules, since it's allowed; eliminating even those uses would only cost two extra bytes, though. Conversely, making all the output uppercase (which, based on comments above, seems to be allowed) would let me save three bytes.

Ungolfed version of the loop, with unescaped strings:

The built-in cmp function returns 0 if the values are equal, -1 if the first is smaller and 1 if the first is bigger. I use the value to index a tuple of strings, and then again as the exit condition of the loop. Indexing a sequence with a negative index (like -1) counts from the end of the sequence, rather than from the start.

I was sorely tempted to skip the imports and just use 4 as my random number, as per XKCD 221 (would that qualify for the -25 character bonus?).

Example run (complete with an error, where I can't do negative math):

I'd claim that by RGB conventions that black is a color, but that would be kinda cheating...

Output in a series of alerts and prompts

[Updated due to rule changes]

First, properly idented (but this is still not very good with obfuscated code):

So the unencrypt function gets all characters between ASCII 33 (!) and ASCII 58 (:) and adds 32, converting them in characters in the range A-Z.

Lets ungolf the code more by unecrypting all the strings:

And finally lets move some instructions to other places, replace the long ternary chain with ifs and elses, join concatenating strings, and simplify the math, to increase the readability: 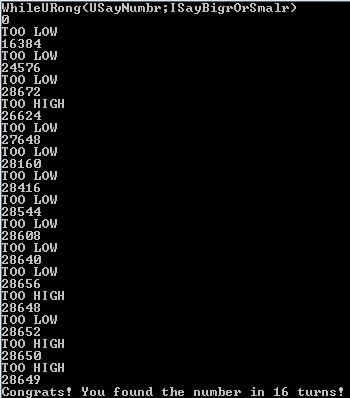 -300 for the rules, -50 for showing the number of guesses, -25 for not using any built-in random number generator, -25 for the out of range message and -10 for colouring the congrats message.

The last line shows up as red.

Ungolfed: Expanded variable names into something easier to understand, and changed hex letters into real letters.

Note that the last line is a comment, so it contains no string or character literals.

The last line is printed in green. 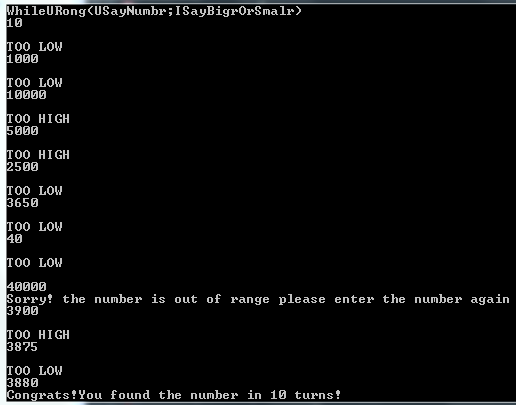 Explanation (recall that J is read from right to left):

Not gonna win but a fun way to get the letters I think.

(Yes, these count as bytes, the APL charset fits in a byte.)

I've claimed "display the game rules" and "count the number of turns".

The character count is based on the code with all whitespace removed.

Note that Pogo is not a fake language. I created it and wrote a compiler and IDE for it here: https://github.com/nrubin29/Pogo

4
Make a 24 Game Solver
10
Write the shortest game of alak
18
RGB Gradients Generation
16
Numbers x such that x^2 divides 7^x-1
26
Pick a random number between 0 and n using a constant source of randomness
17
Vacancy or no vacancy?
11
The weird and wild bean game
24
Who will win a Rock, Paper, Scissors, Lizard, Spock game?
2
Code golfing my guess the number game with feedback in NS-HUBASIC - Can it be code golfed any further?