Bring my memories about Geronimo Stilton back

If you have read in your childhood a Geronimo Stilton's book i am sure that you remember the style of the text, sometimes the words was decorated for making the act of reading more funny for kids, example

But when you are an adult you dont have that little entertainment in your readings... why? In a nostalgic attack i have decided to make an algorithm to create that output with every text in the world

Its not very similar, but its curious

Make a program that with an input like this: 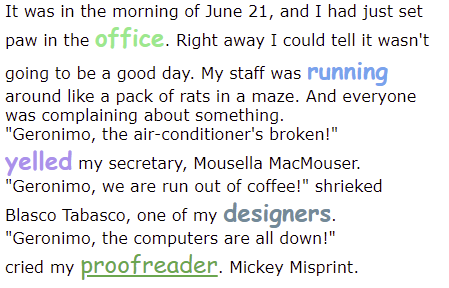 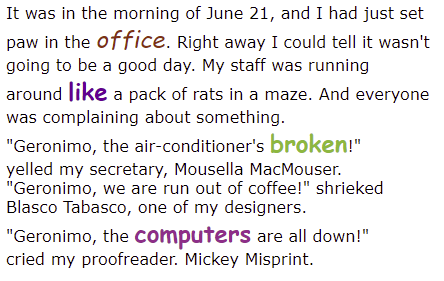 (This outputs are an image because there is two ways to create the output, show it in your program some way or create an output html like mine) thats my truly output:

I have made an example of the algorithm (not golfed) in java: Here is it This is the list of steps that you have to follow starting whit the base input:

code-golf random text-processing
Share
Improve this question
edited May 23, 2021 at 2:10

(Ab)uses a RegExp-replacer to modify the picked words. If anyone is interested, I'd be happy to add an explanation, if requested.

Wow. Just wow. I'm probably missing a really obvious golf here. This is probably the longest program I have ever written, after "Help me count the omer".

How does this work?

Wraps an immediate invocation of g, a recursive function, inside a p tag.

In g, we initialize multiple arguments: t, which is an array of words, M, the built-in random function, and then c which returns a random integer from 0 to 255. This is followed by three invocations used as the color of the word (each call to g only replaces one word). We also set the "effect" used on the modified word. Next, the function x is where the magic happens: takes a word and a callback and replaces all alphabetical letters and special characters sandwiched between alphabetical letters with a call to the callback. I'm not a regular expressions expert, but luckily I knew enough about lookbehinds and lookaheads to implement the replace. This saved 47 bytes because before I was using a lengthy test condition.

We also create z which finds a random number whose corresponding word has at least 4 characters.

Function body: if the length of t is less than 20, return t unchanged, otherwise set t[C=z()] (the random word) to a call to x with that word and a special HTML generator as a callback. We also use an && so that rather than returning an assignment, we return a concatenation of the new t and a recursive call with t.slice(20). Note that using spread operators saves no bytes.

g is then invoked with m.split(/\s/) and joined with a space.

Not the answer you're looking for? Browse other questions tagged code-golf random text-processing or ask your own question.