Complex floor is a domain extension of the mathematical floor function for complex numbers. This is used in some APL languages to implement floor ⌊, ceiling ⌈, residue |, GCD ∨, and LCM ∧ on complex numbers.

For the rest of this challenge, an integer refers to a Gaussian integer, i.e. a complex number whose real and imaginary parts are integers.

One shape that satisfies these conditions is a rectangle \$\sqrt{1\over2}\$ units high and \$\sqrt2\$ units wide, rotated 45 degrees, as in the following image. 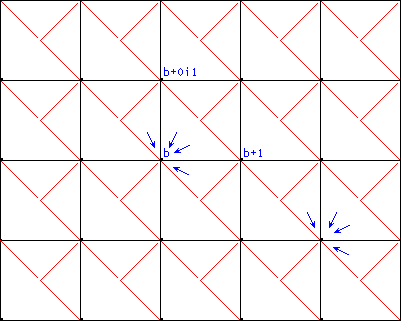 One interesting consequence of fractionality is that the magnitude of the residue is always smaller than that of the divisor, and the Euclidean algorithm always terminates on arbitrary complex number inputs.

Please note that simply flooring the two components is NOT a valid answer since it violates Fractionality: when \$z = 3.9 + 2.9i\$,

You may represent a complex number as a built-in complex number or a pair of real numbers. You don't need to care too much about boundary conditions, since floating-point imprecision will impact its correctness anyway.

It is known to be implemented in Dyalog APL, J, and NARS2000. You are not allowed to use floor/ceiling/residue/GCD/LCM functions with non-real complex arguments for these languages.

Replicating the image in the challenge description.

-5 thanks to Razetime for pointing out I could take real and imag parts as left and right args.

For reference, per the link in the OP, Eugene McDonnell's algorithm is:

The algorithm for the determination of g , the floor of a complex number z , may be explained informally as follows:

We take the real and imaginary parts as left and right args.

We note that the answer is:

depending on the case.

The algorithm for the determination of g , the floor of a complex number z , may be explained informally as follows

Needed to add 17 bytes in order to sort out a bug.

16 bytes longer, but minimizes the amount of rounding-up required*, while still satsifying the convexity requirement, for all complex numbers.

McDonnell's function unsatisfyingly rounds-up either the real or imaginary part of a complex number whenever their fractional parts sum to greater than 1, even though the fractionality requirement (condition #3) would still be satisfied by rounding down until r^2+i^2>1.
The convexity requirement (condition #5) prevents us from rounding down for all r^2+i^2<=1, but we can minimize the amount of rounding-up needed by using a 'quarter-octagon' shape, instead of a triangle, for fractional r and i between 0 and 1.
The rounding 'domains' are shown in different colours here: 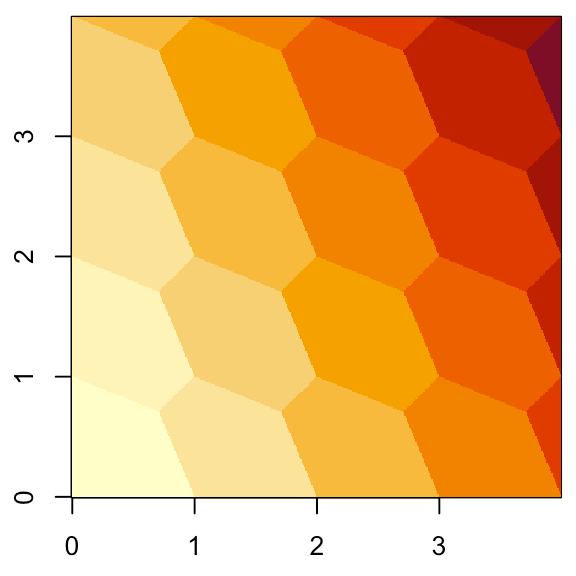 -3 bytes by using the grade up idea from frasiyav's BQN answer. Go upvote that too.
-1 byte by fixing a bug pointed out by tsh
-1 byte thanks to caird coinheringaahing

This is just a golf of Eugene McDonnell's algorithm. Using the same concept for golfing the 3-way conditional as Jonah's J answer.

Thanks Eric Duminil for the idea of using 2 arguments.

Try it online! Explanation: Calculates \$ \lfloor a + bi \rfloor \$ using the following formula which is the complex conjugate of the rectangular tiling suggested in the question, and therefore trivially still satisfies all the requirements:

Uses McDonnell's definition. Real coefficient in A1; imaginary in B1. Output is an array of real and imaginary coefficients.

This is a port of Neil's answer

Not the answer you're looking for? Browse other questions tagged code-golf math complex-numbers open-ended-function apl or ask your own question.