Do I need a win streak?

You have played \$N\$ matches in some game where each match can only result in one of the two outcomes: win or loss. Currently, you have \$W\$ wins. You want to have a win percentage of \$P\$ or more, playing as few matches as possible. Output the minimum win streak that you need. Assume the current win streak is at \$0\$.

-4 bytes thanks to pajonk

Some simple math: if \$X\$ is the number of wins we need, then we have:

Why aren't I using Vyxal? Because I'm leaving the chance for others so they can claim the bounty.

This is an even more in-depth explanation of this answer. If you are familiar with Jelly, you should probably skip this. I won't do these often.

Since this link is called with one argument each time, it is a monadic chain. Hence, as we walk down the chain, the following patterns are matched in this order: dyad-monad, dyad-nilad, nilad-dyad, dyad, and monad (nilads take 0 arguments; you can think of them as constants) (monads take 1 argument) (dyads take 2 arguments).

Since the link doesn't start with a nilad, the evaluation value starts equal to the argument, [W, N, P].

First, we see Ḣ, a monad meaning "pop and return the first element". This matches the last rule, so it applies as a monad to the current value, which is [W, N, P]. Thus, the current value is now W, and this also modifies the left argument object itself to [N, P].

Here, it is important to note the function of $ - it takes the last two links and groups them into a monadic link. Here, the two links are Ḣ and ×. We'll get back to this.

Next, we see _, a dyad (subtraction). It is followed by a monad, namely the one formed by the $ grouping two links, thus matching the first pattern. The dyad-monad pattern, if we have some dyad + and some monad F, computes v + F(a) where v is the current value and a is the right argument. Thus, this computes W - F([N, P]). Here, F(a) computes Ḣ× as a monadic chain whose argument is a = [N, P]. The value starts at v = [N, P] as well.

The first link is a monad and thus the value becomes N. Also, since "pop" mutates, the argument (to both the sub-link and the main link) is now [P]. Then, the second link is a dyad and nothing else follows, so the value becomes N × [P] which is [NP]. This is a singleton list, not a value, but that's fine because everything else vectorizes.

Now, the value is W - [NP] which vectorizes to [W - NP], and the argumnt is [P] since it was mutated within the sub-link.

Penultimately, Ċ is a monad meaning "ceiling", which just rounds all of these values up. Finally, »0 is a dyad-nilad chain which takes the maximum of this value and 0, thus preventing negative outputs.

Here's a shitty hand-drawn visualization of how chaining works out here: 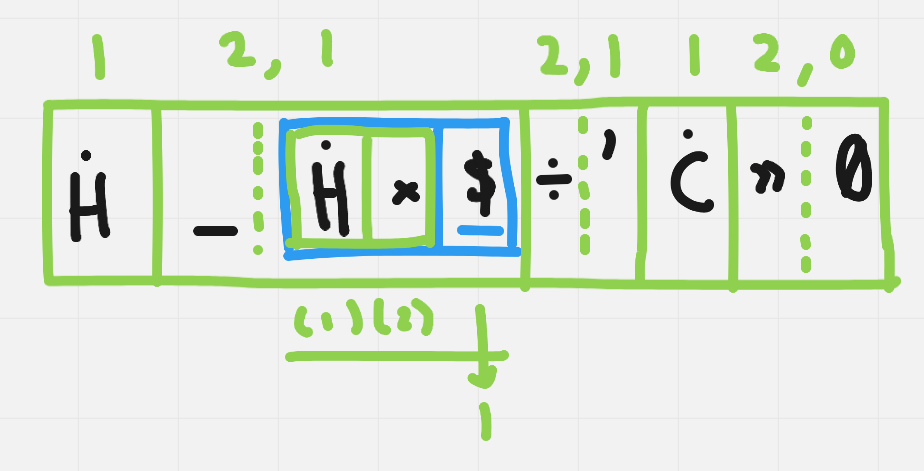 Edit: simultaneous discovery of -1 byte by Kirill L., and then -4 bytes thanks to pajonk

Every answer of Wasif inspires me to make the right one. Thanks.

Full program that takes [w, n] on the left and P on the right.

What? It beat my python answer? oO

Count the number of increments made.

Takes all three parameters as integers except p which is a decimal.

Simple recursion, I am beaten by few minutes....

Until we reach the desired win percentage...

A port of @hyper-neutrino's solutions is of course much shorter at 13 bytes:

Try it online! Link is to verbose version of code. Takes input in the order P, N, W. Explanation:

Try it Online! Here's what I managed to come up with. It doesn't seem like anyone else is going to give this a go using Vyxal, so here's my solution.

A function which pops three values from the stack ([N, W, P]) and pushes the result as an f64.
The function expects the types of all three values to be f64.

We can also directly compute the number of needed wins:

Not the answer you're looking for? Browse other questions tagged code-golf number rational-numbers or ask your own question.

22
Un-round fractions
9
How many decimals are there before I'd need to add 1 when rounding?
11
Can a fraction be simplified using Anomalous Cancellation?
12
In-between fractions
7
Continued Fraction of a Rational Number
11
Repeated reciprocal
16
Convert a percentage to a "simple" ratio
12
Lead your team to win the wrestlers world championship!
24
Remove excessive occurrences
25
Convert a decimal to a fraction, approximately