Tips for golfing in C

What general tips do you have for golfing in C? I'm looking for ideas that can be applied to code golf problems in general that are at least somewhat specific to C (e.g. "remove comments" is not an answer). Please post one tip per answer. Also, please include if your tip applies to C89 and/or C99 and if it only works on certain compilers.

Use bitwise XOR to check for inequality between integers:

If you're declaring a function where all five arguments are ints, then life is good. you can simply write

But suppose d needs to be a char, or even an int*. Then you're screwed! If one parameter is preceded by a type, all of them must be:

But wait! There is a way around this disastrous explosion of useless characters. It goes like this:

This even saves on a standard main declaration if you need to use the command-line arguments:

is two bytes shorter than

I was surprised to discover this, as I have not so far encountered it on PPCG.

The comma operator can be used to execute multiple expressions in a single block while avoiding braces:

Instead of >= and <= you can simply use integer division (/) when the compared values are above zero, which saves one character. For example:

Which is of course still shrinkable, using for example just > and ^ (a smart way to avoid writing && or || in some cases).

The integer division trick is for example useful to decide whether a number is less than 100, as this saves a character:

This is also good in cases when higher precedence is needed.

Certain compilers, such as GCC, allow you to omit basic #includes, param, and return types for main.

The following is a valid C89 and C99 program that compiles (with warnings) with GCC:

Notice that the #include for stdio.h is missing, the return type for main is missing, and the type declaration for i is missing.

or (clang with blocks support)

...where the string literal contains the machine language instructions of your "lambda" function (conforming to all platform ABI requirements).

This works in environments in which string constants are marked executable. By default this is true in Linux and OSX but not Windows.

One silly way to learn to write your own "lambda" functions is to write the function in C, compile it, inspect it with something like objdump -D and copy the corresponding hex code into a string. For example,

...when compiled with gcc -Os -c for a Linux x86_64 target generates something like

MD XF wrote a bash script that may assist in the writing of simple "lambda" functions.

You can call these "lambda functions" directly but if the code you're calling doesn't take parameters and isn't going to return, you can use goto to save a few bytes. So instead of

or (if your environment doesn't have Arabic glyphs)

In this example, eb fe is x86 machine language for something like for(;;); and is a simple example of something that doesn't take parameters and isn't going to return :-)

It turns out you can goto code that returns to a calling parent.

The above example (might compile and run on Linux with gcc -O) is sensitive to the stack layout.

If it isn't immediately apparent, this answer was mainly written for the lols. I take no responsibility for better or worse golfing or adverse psychological outcomes from reading this.

The ternary conditional operator ?: can often be used as a stand in for simple if--else statements at considerable savings.

Unlike the c++ equivalent the operator does not formally yield an lvalue, but some compilers (notably gcc) will let you get away with it, which is a nice bonus.

But with different precedences, and don't change x like ++ and --. Also you can use this in really specific cases: ~9 is shorter than -10.

That's more esoteric, but I've had occassion to use it. If you don't care about short-circuiting

Define parameters instead of variables.

You don't need to actually pass the second parameter.

Also, you can use operator precedence to save parenthesis.
For example, (x+y)*2 can become x+y<<1.

Use cursors instead of pointers. Snag the brk() at the beginning and use it as a base-pointer.

But, there's more! Then you can have pointer args and returns in functions that are shorter than macros (especially if you abbreviate 'return'):

To make a cursor from a pointer, you subtract the base-pointer, yielding a ptrdiff_t, which truncates into an int, losses is yer biz.

This technique is used in my answer to Write an interpreter for the untyped lambda calculus.

The ternary operator ?: is unusual in that it has two separate pieces. Because of this, it provides a bit of a loophole to standard operator precedence rules. This can be useful for avoiding parentheses.

The usual golfing approach is to replace the if with &&, but because of the low precedence of the comma operator, you need an extra pair of parentheses:

The middle section of the ternary operator doesn't need parentheses, though:

Any part of your code that repeats several times is a candidate for replacement with the pre-processor.

is a very common use case if you code involves more than a couple of functions. Other longish keywords like while, double, switch, and case are also candidates; as well as anything that is idomatic in your code.

I generally reserve uppercase character for this purpose.

Since usually EOF == -1, use the bitwise NOT operator to check for EOF: while(~(c=getchar())) or while(c=getchar()+1) and modify value of c at every place

If you can, try to replace

If your program is reading or writing on one in each step basis always try to use read and write function instead of getchar() and putchar().

Exercise:Use this technique to get a good score here.

Use for rather than while

Any while can be changed into a for of the same length:

On its own, that's not golf. But we now have an opportunity to move an immediately-preceding statement into the parens, saving its terminating semicolon. We might also be able to hoist an expression statement from the end of the loop; if the loop contained two statements, we could also save the braces:

Even do...while loops should be replaced with for loops. for(;foo,bar,baz;); is shorter than do foo,bar;while(baz);.

Make use of return values to zero stuff. If you call some function, and that function returns zero under normal conditions, then you can place it in a location where zero is expected. Likewise if you know the function will return non-zero, with the addition of a bang. After all, you don't do proper error handling in a code golf in any case, right?

You may look into the IOCCC archives (international obfuscated C code contest).

One notable trick is to #define macros whose expansion has unbalanced braces/parentheses, like 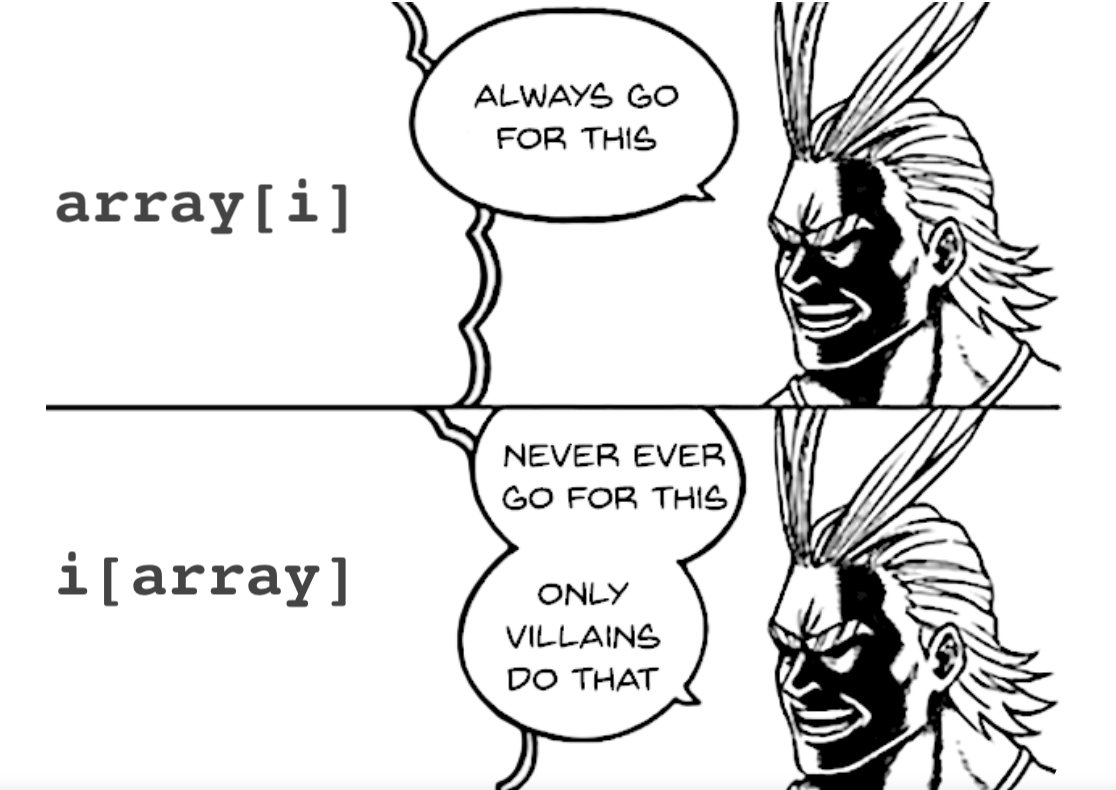 It's not very common to see an array indexing expression (whatever)[x] where whatever requires wrapping in parens and x doesn't, but when you see one, you can swap the two positions and write x[whatever] to save two bytes.

Another interesting idea is to use dprintf, which is the same as printf except that it takes an extra argument, specifying the output file descriptor. It will only output to STDOUT if said argument is equal to 1. This can be abused to potentially save a few bytes over the previously mentioned methods:

Assign instead of return.

This is not really standard C, but works with every compiler and CPU that I know of:

has the same effect as:

Because the first argument is stored into the same CPU register as the return value.

Note: As noted in one comment, this is undefined behaviour and not guaranteed to work for every operation. And any compiler optimization will just skip over it.

Another useful feature: X-Macros can help you when you have a list of variables and you need to do some operation which involve all of them:

Using asprintf() saves you the explicit allocating and also measuring the length of a string aka char*! This isn't maybe too useful for code golfing, but eases the everyday work with a char arrays. There are some more good advises in 21st Century C.

for(int i=0;i<n;b(i++))a(i); -3 more for moving all but one statement into the top and out of the main loop, removing the braces

If you can reduce your problem to simple functions with the same signature and defined as single expressions, then you can do better than #define r return and factor-out almost all of the boilerplate for defining a function.

Program result is its status value returned to the OS or controlling shell or IDE.

Using __VA_ARGS__ allows you to use the comma operator to introduce sequence points in these function-expressions. If this is not needed, the macro can be shorter.

As noted in the very first answer, some compilers (notably, GCC anc clang) let you get away with omitting #includes for standard library functions.

While that usually goes well, it might cause problems in some cases, since the implicit declarations of standard library functions inside the source code will cause the compiler to treat return values as ints. For example, the code

wont work as expected on a 64-bit platform since getenv returns a 64-bit memory address which doesn't fit into an int.

In this case, there are at least three ways to use getenv without errors.

Try cpow() instead of cos()

This uses Euler's formula, a little complex analysis and the observation that assigning a complex to a double yields the real part (careful with variadic function calls and other subtleties).

This type of trick can be used to reduce

105
Simple cat program
78
Is this even or odd?
170
Tips for golfing in JavaScript
89
Find the Factorial!
81
Sum of all integers from 1 to n
91
Determine whether strings are anagrams
74
The alphabet in programming languages
61
Print 0 to 100 without 1-9 characters
63
Draw an asterisk triangle
74
Make a ;# interpreter
See more linked questions