Fibonacci trees \$T_n\$ are a sequence of rooted binary trees of height \$n-1\$. They are defined as follows:

Each tree in this sequence is the most unbalanced possible state of an AVL tree of same height.

By the usual sequence rules, your function or program may behave as one of the following:

A binary tree can be output in any acceptable ways, including but not limited to

We use J boxes to represent the trees:

Expressions in Mathematica are trees. True represents the absence of a node. 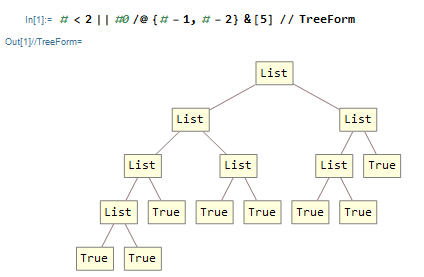 Takes input from STDIN. Outputs the nth Fibonacci tree in the form of a nested list, where a list represents a node and 0 represents NIL.

Since the link is called as a nilad, zeros are supplied for x and y and a number from STDIN is taken for n.

Returns the infinite list of Fibonacci trees, which get printed one per line.

I've started from what's probably the second shortest way of computing Fibonacci numbers in Husk (the shortest being the builtin ńįf):

This puts a 0 at the beginning of the sequence (with őė), then scans (G) recursively the same list ‚āÄ with +, starting from 1 and summing every time the last result to the next element in the list.

With this, we just need to alter the starting values and the + operator to make it compute Fibonacci trees.

The 1 now becomes "0" (s0, string representation of the number 0) and the 0 turns into "" automagically, thanks to Husk understanding that the list is now a list of strings rather than numbers. The operator that generates a new tree from the two previous ones becomes a bit more complex (but not as complex as I originally made it, thanks Dominic van Essen!):

Thanks @Dominic van Essen save 3 bytes.

Save 5 bytes changing the first if condition with and.

Thanks @user save 1 byte.

f is the infinite list of Fibonacci trees, represented as a custom type defined in the first line (E is the empty tree, N l r is the tree with left subtree l and right subtree r).

Unfortunately, Haskell is not very well-suited for problems involving trees, since it can't (natively) handle nested lists or tuples. Defining my own data type for trees was the shortest way I could find to solve this issue.

Try it online. (The footer is to print each tree on a separated line with newline-delimiters. Feel free to remove it to see the actual infinite list output.)

Saved 2 bytes with a suggestion from Jo King.

Output is a nested list of lists of 2 elements each.
Leaves are represented as lists with no child lists (both list elements are NULL).

Try it online! Link is to verbose version of code. Outputs nodes as arrays of between 0 and 2 elements. Explanation:

Take the last and second last results (if any), and make them the children of the root of the next tree.

Print the last tree, if any.

Try it on the online Branch interpreter!

Of course, it's only natural that a language based on binary trees would have a way to solve this challenge. Branch is still in development; I'm not sure how I could've solved this before adding a bunch of bugfixes and a couple of new helpers.

Pretty-printing the tree was actually around from the start though. I used it as a debug feature; never thought I would've found a challenge so soon to use a debug feature as output formatting for :P

The command line argument is automatically loaded into the first and only node in the binary tree. Note that [...] is the same as in BF; that is, it's a while loop, so if the current value is 0 at [, it skips to ], and if the current value is non-zero at ], it jumps back to [. Therefore, [...0] will only run if the value is non-zero, but then the value is zeroed at the end and so it never runs more than once. Essentially, this is an if statement.

Outputs as a nested list, where each list contains two elements which are the left and right children, and 0 is null.

-10 bytes thanks to Razetime and user, and also using a better online interface courtesy of Razetime

Try it online! Outputs a tree of tuples. No test suite due to the program's use of history. Explanation:

Replace the input with a newline, representing two empty trees.

Repeat the number of times given by the original input...

Keep only the last tree.

Additionally, if you (ql:quickload :memoize), you can do (memoize-function 'f) and it will cache intermediate results.

A bit long since the trees need to be printed as a string to be observed.

I chose the ASCII art for fun.
The code consists of a function c() whose role is to call f(), just once. f() is a very creative recursive function with a passion for drawing trees on blank arrays.

Only the first 5 trees are correct. To display bigger trees I should use an exponential law for the spacing between the nodes, but if I do so, then the highest nodes would be so distant from each other that you wouldn't recognize bigger trees anyway.

Not the answer you're looking for? Browse other questions tagged code-golf sequence fibonacci binary-tree or ask your own question.