in the order of \$a_0\$ to \$a_{k-1}\$ or the reverse. There are infinitely many correct such relations; you don't need to minimize the order of the relation. But, to ensure that the result is at least minimally useful, the order \$k\$ cannot exceed \$2^m\$ for any input value of \$m\$.

(Side note: An actual sequence is defined only if the initial \$k\$ terms are given along with the recurrence equation. That part is omitted for simplicity of output, and to give incentive to approaches not using the brute-forced terms.)

Note that, for odd \$m\$, every odd-column term will be zero, so you will get a recurrence different from the OEIS entries which strip away zeroes (e.g. 3 rows, 5 rows, 7 rows).

Here are the representations from the OEIS, adjusted for odd \$m\$. Initial terms start at \$D_m(0)\$, and the coefficients are presented from \$a_{k-1}\$ to \$a_0\$. Again, your program only needs to output the coefficients. To empirically check the correctness of your output of length \$k\$, plug in the \$k\$ initial terms from the respective OEIS entry, and see if the next \$k\$ terms agree.

There is at least one way to find the recurrence without brute forcing the tilings, outlined below:

An example algorithm of computing the minimal polynomial of a matrix can be found on this pdf.

(Of course, you can just brute force the domino tilings for small \$n\$ and plug into a recurrence finder.)

Try it online! (uses a polyfill for ⍤ since TIO is not updated to 18.0 yet)

We compute a transition matrix, then use the approach listed in S. Białas and M.Białas to find the minimum polynomial and hence the recurrence relation.

The first cell is filled (it is the right side of a horizontal domino sticking out from the previous column), but the second and third cells are empty. This could occur e.g. as the second column in the following tiling (n=4, 3×4 grid):

When considering state transitions, we have to be careful to avoid double counting.

My approach is to require full horizontal dominos to be placed whenever possible, then vertical dominos can optionally be placed in the next state's column.

then we force horizontal dominos on the bottom two rows

One possibility would be to place no vertical dominos at all, so 1 1 1 → 0 0 0 is a valid state transition.

In addition, a vertical domino can be placed in either of two positions:

Obtaining the Recurrence from the Transition Matrix.

The paper describes the approach well, but I modified it a little while golfing.

With regards to powers of the transition matrix \$A\$, this can be rewritten as finding coefficients $c_i$ such that

Let \$B\$ be the augmented matrix for this massive system of equations for \$k=L\$. Solving the full \$B\$ would give a recurrence of order \$L=2^m\$, but we need a smaller recurrence.

Saved 37 bytes thanks to fireflame241!

This is using a port of my JS answer to Number of domino tilings to feed SymPy's find_linear_recurrence() method.

Try it online! or Run a test suite 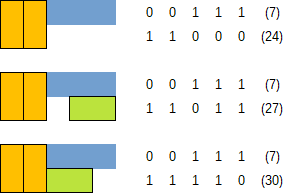 As a rule of thumb, empty cells in the \$n\$th row have to be filled with vertical dominoes (in yellow) and we may then insert horizontal dominoes (in green) in the remaining free spaces of the new row.

For the vertical dominoes, we make sure that the bits that are cleared in k are not cleared in i by testing if the following expression evaluates to \$0\$:

For the horizontal dominoes, we make sure that the islands of bits that are set in both k and i all include an even number of bits. We do that with a regular expression:

Both tests are combined into:

The variable a holds a list of \$2^m\$ entries describing how many times each state appeared in the previous iteration. We update a by using the above tests: the new value for a[i] is the sum of all previous values a[k] for all pairs of compatible states (k,i):

We use this method to compute the first \$2^m+2\$ terms of the sequence in the list L and inject it into find_linear_recurrence() to get the final solution.

Note: According to OEIS (and as already pointed out by fireflame241), computing \$2^{\lceil m/2\rceil}\$ terms would be enough and would make the code faster, but also a bit longer.

Similarly to Arnauld's answer, this uses my answer to Number of domino tilings to feed SymPy's find_linear_recurrence function.

Try it online!. TIO doesn't have sympy in its Python 3.8 installation, so the link includes a polyfill of math.prod, which is new to 3.8.

Since this multiplies (floating-point) complex numbers together, it loses precision for \$m\geq 5\$, leading to a completely incorrect recurrence.

Not the answer you're looking for? Browse other questions tagged code-golf combinatorics grid tiling dominoes or ask your own question.