I think the ASCII art questions on PPCG are fun to do, but personally I think it can be pretty hard, especially when the question is tagged as code-golf.

I wonder if anyone here might have some tips that will be useful for producing ASCII art.

I'm just looking for general tips, but language-specific is allowed since most of them can be translated anyhow.

You can apply LZMA compression to the string.
Many languages support it.

You can use processing instructions such as [char][number] (e.g. b12).
This compression algorithm is used here: https://codegolf.stackexchange.com/a/20589/10920

You can use arrays of integers to store small shapes such as:

Each bit is then read using bitwise operator &.

The above algorithm could be improved by using a bigger integer base:

Sometimes the required ASCII art is symmetric at some point. For example, Argyle ASCII Art requires an output similar to this:

One could just print this normally, but depending on the language, the code required can be shortened by only generating the top half of the result, reversing it and swapping / and \.

In ASCII Art Archery Arrows the result to print is this, scaled to a given n:

If we take a look at the arrow, we can see there's 8 kinds of lines:

Let's try the same for its transpose.

Here, there are 10 kinds of lines.

But here's the catch: the bottom 5 are identical to the top 5, except for swapping / and \. As per the previous rule, you can first generate the first 5, copy, do the swap, and finally transpose to get the arrow. This can save a lot of code.

Unless the question forbids them, the current consensus on Meta is that ASCII art challenges do not require a specific byte stream, but output that looks correct.

This means that we can use ASCII control characters, ANSI escape sequences and Linux console codes in our answers, assuming a supporting terminal.

Unless specified otherwise, the rest of this answer will explain the behavior of Linux terminals, which is what I have available for testing right now.

Support/interpretation varies from terminal to terminal and character to character. The most portable one ought to be the linefeed (\n, \x0a), which moves the character to the beginning of the next line.

Other useful characters include:

Many languages permit actual control characters in the source code.

While there are many more, the most useful console codes for ASCII art are probably these:

This one might be a bit obvious, but... look for patterns, similarities and repetitions in the output. For instance, when I saw the Transform number into 7-segment display pattern task I started thinking about how one could golf it, and started looking for similarities. Due to the way the horizontal segments go between the vertical ones in the character matrix it'd probably be easiest to deal with three segments at a time, grouped together as such (adding two "always empty" segments for the first, topmost one): 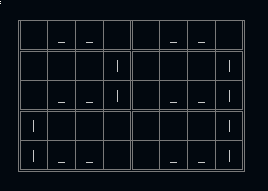 This answer was to a question which wanted ASCII art which consisted of the characters + |- and newlines. Since there are only 5 possible characters, these can be treated as a base 5 number and converted to bytes, packing 3.45 characters per byte.

Often, the data will have some regularities, even if those regularities aren't strong enough to employ specific tools such as mirroring. For instance, in the above question, the desired output had newlines roughly evenly spaced throughout the test, since the text was roughly rectangular. I exploited this to shorten my code, by using Pyth's split into n pieces function, then joining on newlines.

Know your tools, and choose the right one for the job.

The most powerful and efficient text processing tools I know are:

Use if the thing you want to do can be conscisely described in regex substitutions, such as this answer

Obscure text-processing tools: gema, etc. (I'm sure there are others, but they're too obscure)

Use if they have a feature that is exactly what you need, that nothing else has. Such as in this question, with gema's recursive matching.

Use if you're exploiting some subtlety complex enough that no other tool will do the job or it just does the job shorter.

This applies in every code-golf question, but especially here. You're not going to know whether a regularity is exploitable until you try it out. Possibly in multiple languages.

Not the answer you're looking for? Browse other questions tagged code-golf ascii-art tips or ask your own question.