Determine the area enclosed by slashes

For example, let's look at the following ASCII art:

Your challenge is to write a program that determines (and outputs) the total area enclosed by ASCII art composed only of spaces, slashes and newlines. Slashes won't necessarily be a part of a shape with non-zero area. A point is defined as enclosed iff it is unreachable from any point outside the art's bounding box, if slashes are impassable.

Encloses 3 cells fully and 10 partially, for a total of 8.

Encloses 12 cells fully (the four innermost slashes have both corresponding half-cells enclosed) and half of 12 cells, for a total of 18.

Encloses 8 cells fully and 12 cells partially, for a total of 14.

This is tagged code-golf, so the shortest answer wins.

Expects a matrix of characters as input.

This can be quite slow on some inputs, such as the last test case.

We divide each cell into 4 areas as follows:

The characters in the original matrix are converted on the fly to 7-bit integers as they are visited:

The conversion is done with:

Evaluating the area enclosed by slashes is equivalent to counting the number of cells from which we can't escape from the grid, starting from a given area ID. We arbitrary start from area #0, but that would work with any of them as long as it is consistent.

We iterate on all possible starting points and process some kind of flood-filling that takes the area IDs into account.

For each visited cell, we try to move to an adjacent cell (left figure) and to another area within the same cell (right figure). 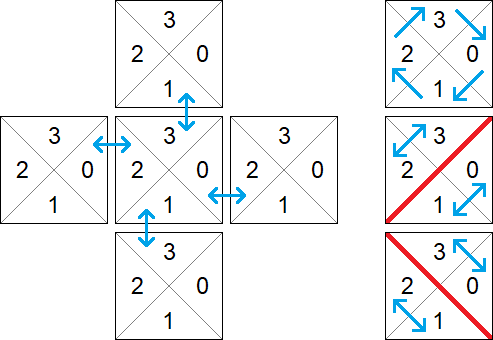 The recursion stops either when we escape the grid or when we get trapped.

This expands the ASCII to a 4 times as big bit map that gets searched in for enclosed spaces. Maybe you can do the calculations on the original map, but at least this approach works for now. :-)

Then shift the matrix in the four directions by rotating the matrix. At the borders 2 gets shifted in. The resulting matrices are added up together by taking the highest value (so 2 expands), while 0 in the matrix deletes (so borders blocks expansions). We do this until the result does not change (…)^:_.

We are interested in the 1's that still stand. And because of our bit masks, we can simply divide by 12 of the total sum of all 1's to get the result.

Loop over each row of the art.

Output it at three times its original size.

Adjust the size of the art for a notional 1-square border on each side.

Draw a notional box around the notional border. This allows the border to be filled without actually having drawn anything.

Fill the exterior of the art with #. Sadly Charcoal doesn't support multiline fill patterns. (Its fill was designed for the challenge, Bake a slice of Pi.)

Draw Xs at every position (including the notional border), overwriting all the existing spaces and slashes. This means that each square now has only four #s (or fewer if it didn't get completely filled in).

Alternative solution, based on @xash's idea of 4×4 masks, also 91 bytes:

Input the art padded on both sides.

Add padding to the bottom of the art.

Draw a notional box around the padded art. This allows the padding to be filled without actually having drawn anything.

Jump to the cell.

Draw the cell at four times size, except that space becomes a dot. This means that it takes up the same amount of space as a / or \ but without impeding the flood fill.

Move the cursor off the last dot so that the exterior of the art can be flood filled with #.

Divide the number of #s by 12, and subtract that from the padded size of the art.

Input is a char matrix, with ; as row separator.

Try it online! Or verify all test cases

The approach is similar to that used in my answer to this other challenge.