Produce an image based on an elementary cellular automata ruleset

What is elementary cellular automata?

Since I'm not sure I'll be able to explain this so that somebody who has never heard of this is able to understand, I'm giving an explanation from https://mathworld.wolfram.com/ElementaryCellularAutomaton.html

Elementary cellular automata have two possible values for each cell (0 or 1), and rules that depend only on nearest neighbor values. As a result, the evolution of an elementary cellular automaton can completely be described by a table specifying the state a given cell will have in the next generation based on the value of the cell to its left, the value the cell itself, and the value of the cell to its right. Since there are 2×2×2=2^3=8 possible binary states for the three cells neighboring a given cell, there are a total of 2^8=256 elementary cellular automata, each of which can be indexed with an 8-bit binary number. For example, the table giving the evolution of rule 30 (30=00011110_2) is illustrated above. In this diagram, the possible values of the three neighboring cells are shown in the top row of each panel, and the resulting value the central cell takes in the next generation is shown below in the center.

Given a ruleset n, where n is positive and less than 256, produce an image like the one above, with 15 generations (+1 starting gen-0) and 2 colors of your choice. The starting gen-0 is one active cell in the center, like in the image above. You can choose to start from the bottom and work upwards.

You can take input either as a:

You cannot take images from external resources, the image should made from scratch by your program.

Your output should be a 31x16 image, with each row representing a separate generation. Generations should not be given in a mixed order.

Your submission should always contain the following:

Scoring is done by byte count

As requested, adding some test cases specifically for edge handling.

-13 bytes thanks to @Surculose Sputum!

thanks @Surculose Sputum again for saving some bytes and fixing the boundary bug!!!!

Output a 31x16 pbm image in stdout. You might need a magnifying glass to see those tinnie images though. 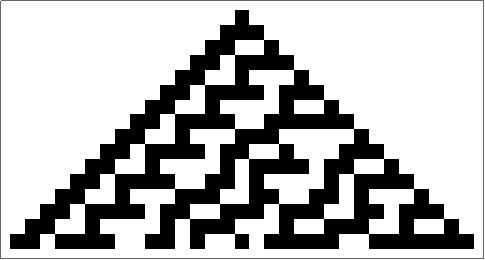 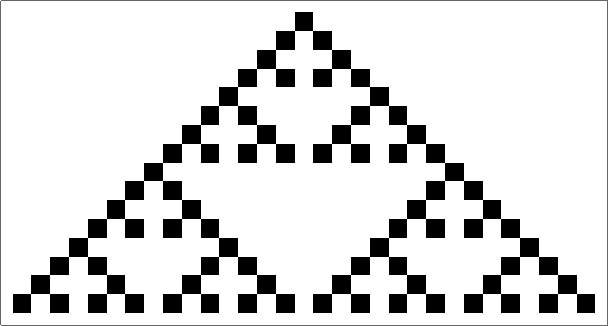 Since this challenged changed to gode-golf I applied the changes that @Dan the Man proposed and saved some bytes.
The images now should have inverted colors

Outputs via (as you could easily tell) SVG. The ExportString part can be dropped, but then it will output a Graphics object - it's basically an image, but it's hard to view without loading it into Mathematica or exporting it via Export/ExportString.

a (bad) port of this python answer

Outputs to a pbm file with white being off and black being on. You can switch the on and off colors at no cost to bytes.

Thanks to @AdHocGarfHunter for pointing out a mistake, now corrected

Input is binary in reverse order. Output is white for active cell, black for inactive.

It could surely be shorter with pbm output, but I like to see my stuff directly.

Not the answer you're looking for? Browse other questions tagged code-golf graphical-output grid cellular-automata simulation or ask your own question.