The garden is a 2-dimensional grid with 49 rows and 49 columns.

The Easter Bunny™️ is in the center of the garden, minding his own business, holding on to 100 Easter eggs.

Unfortunately, there's a team of 4 children who aren't content to collect chocolate eggs, they want to capture the Easter Bunny™.

The game starts with 4 kids, one in each corner of the garden.

The kids can take 1 step each turn, in one of the 4 cardinal directions (North, South, East or West). When they've each taken a step (or decided not to), the bunny will take a move.

The kids can only see the Easter Bunny or its eggs when they are 5 steps away or nearer. 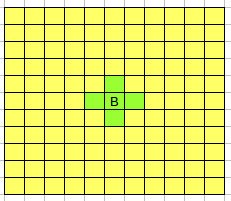 The bunny can hop up to 2 spaces away on both axes (describing a 5 x 5 square he can hop to).

The Easter Bunny™ can only see the kids when they are 5 steps away or nearer. 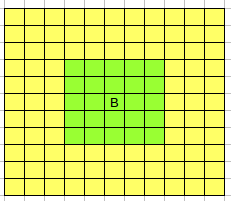 Neither kids nor the Easter Bunny™ can leave the garden.

The game ends when:

The challenge is to write behaviour for the Easter Bunny™ or for the team of kids. Your code will be run against all of the other kind of entry.

You can edit conig.js to change two things about the run:

(See instructions for the bunny below)

Your goal is to collect as many eggs as you can, and then catch the Easter Bunny™.

Your code will take the form of an array of 4 JS functions, which will each control a kid starting in these positions (in this order):

If you're watching a match, these are represented by the numbers 1 to 4.

The functions should each have this fingerprint:

api is your function's interface to the game (see below).

It also provides information about the state of the game with these methods:

Age is the number of turns since the bunny dropped the egg.

Change my_entry to your own team name.

Then have a try at writing an entry for the Easter Bunny™.

Your goal is to give away as many Easter eggs as you can and, crucially, to evade capture.

The bunny starts at the centre of the garden, at coordinates 24, 24.

Your code takes the form of a function with this finger print which runs once a turn, after the children have moved.

The api object provides this method to tell the bunny how to move:

The two arguments tell the bunny where to hop to relative to it's current position:

It also provides this functions to give you storage between turns:

And these functions to give you information about the game:

Change my_entry to your own bunny name.

Then have a try at writing an entry for a team of kids.

Bunny: smartish (2 points, but, of course, as of posting)

Hops to the middle when it doesn't see anybody, and tries to escape the kids (using an algorithm I probably implemented incorrectly).

Not the answer you're looking for? Browse other questions tagged grid king-of-the-hill javascript asymmetric or ask your own question.

17
The Easter Egg Hunt on the Hill
133
Red vs. Blue - Pixel Team Battlebots
12
Capture The Flag
24
KOTH: Everybody loves tokens
27
Team of The Hill!
12
KoTH: Wizard Battle
4
Chase the Easter Bunny and collect his eggs
18
King of the Hill: Nose Poker - An ogre game for ogres