Who doesn't love the Pythagorean theorem \$a^2+b^2=c^2\$? Write the shortest method you can in any language that takes in value a and b and prints out The hypotenuse of this right triangle is c. Keep c to only three decimal places. 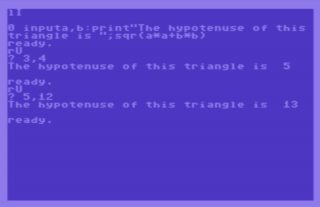 232
Golf you a quine for great good!
8
Generating Word Grids