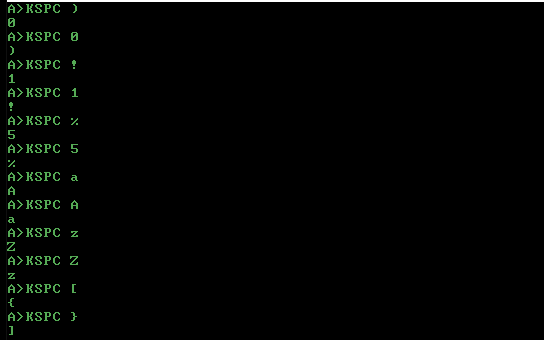 Well, the PC BIOS already contains all of the code and tables necessary for this since it actually handles the conversion of scan codes received from the keyboard to ASCII chars (in real/DOS mode at least). There's no way (that I know of) to actually hook this on just any "PC-compatible" BIOS, however if you know the location of the table in ROM (on the IBM PC it starts at F000:E8E5), you can use that.

On Page A-25 of Appendix A the IBM PC Technical Reference (listing of the entire source code of the PC BIOS) is the disassembly of this table: 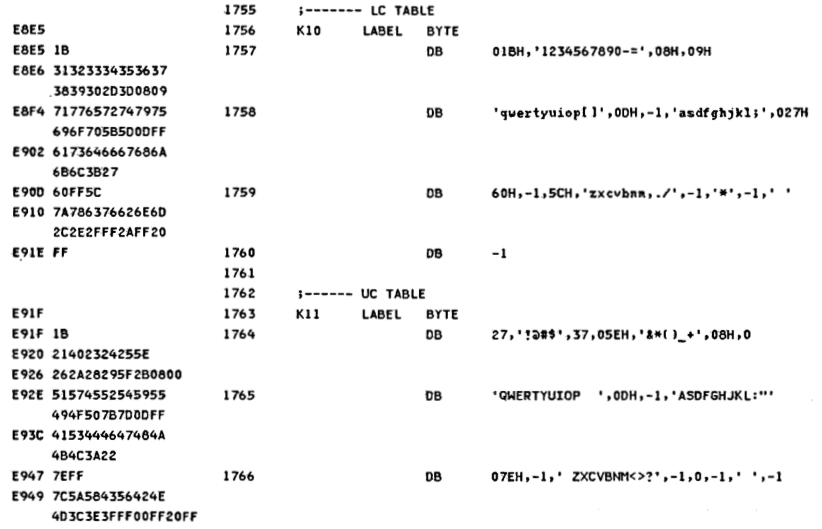 Unfortunately, this address will be different on any given PC-clone BIOS and of course, there's no guarantee that it would even be implemented in the same way by anyone else. Thus, this submission is guaranteed to run only on a Genuine IBM PC. Go Big Blue!

We use a lookup table for these pairs:

For all other characters, we use the following code:

which supports these 3 cases:

Explanation: The T command is Retina's transliteration operation. Among its special characters are:

The trick is therefore to create as many ranges as possible to reduce the length, plus avoiding having the - and _ characters where they would be interpreted as a special character and avoiding the ` at all by including it inside a range. Additionally arranging for the range to transliterate to its reversal allows that to be expressed very cheaply.

This solution has been out-golfed but is preserved due to being interesting for its sourcing of the data.

This works by extracting the character pairs from a built-in note about keyboards.

⎕FMT ForMaT as a character matrix

⍵∊…: if the argument character is a member of that matrix:

⍵= Boolean matrix mask where they are equal

⍸ get indices where true

a⌷⍨ use that to index into the matrix of all pairs

Forms a mapping for non alphabetic characters, applies the translate atom, y, and then swaps case.

-1 byte implicitly thanks to @Grimmy due to his comment.

Try it online or verify all printable ASCII characters. NOTE: The TIO versions use the S•...•.I (builtin for the n'th permutation of a list) instead of œ•...•è (push all permutations of the string (extremely slow bottleneck for a string this large), and index into it).

This number(+1) is generated by the Jelly builtin Œ¿, which gets the 1-based index of the permutation.

I decided to implement a solution inspired by @Noodle9's very nice answer, but using pure bash without any utilities (like tr).

Note that you need to run this in an empty directory; this can be fixed at the cost of 2 bytes by using quotes for "{d:n:1}". (This issue only arises with a non-empty current directory when the input is 8, so the output is supposed to be *.)

On the other hand, you can gain 2 bytes if you don't require output for the input \n: just eliminate the quotes in the final echo.

-(…)⍨ apply the following function with that as left argument and the case-swapped original argument as right argument:

¯1* negative one raised to that power

,⊃⍨ use that to pick an element from the case-swapped argument appended to the substitution string

Input character is passed as an argument, and the output is on stdout.

Similar to the Javascript strategy. I'd like to get rid of the extra parentheses but this is pretty good.

Builds the "lowercase" and "uppercase" strings so that everything lines up, and connects them together to be passed into the tr function so it can do the proper conversions.

i*f is shortcut for indexOf.

22
Virtual Keyboard Text Input
9
Parse and Process the Key-Language Input
31
The Drunken Typist
15
Parse a Unicode vulgar fraction
4
Parse a nested parentheses
14
Wuxings in Positive Action
27
Distances between keys on a QWERTY keyboard
8
Spell out an integer... in NDos' way