The most common substring

The purpose of this task is to write a program or function to find the most common substring within a given string, of the specified length.

The most common (case-sensitive) substring of s of length n. In the case of a tie, any of the options may be output.

Some more examples, all using the same input string*

(* input is taken from How predictable is popular music?. The result of this task might be used, for example, to find the most efficient way to apply a substitution in order to compress the string)

You can try it online! Increased byte count because, as @xnor kindly pointed out, Python's str.count doesn't count overlapping substrings... But then @xnor's reformulation of what I was doing allowed to slice a third of the bytes!

This creates a list of all the substrings in s of size n, plus the suffixes of size n-1, n-2, ..., 1. Then we find the max on that list, with the numerical value being used to sort given by

That means that if a and b are from l, a > b if a shows up more times in l than b. This means the shorter suffixes are never the result of the max because they only show up once, and even if the correct-sized substrings only show up once, they are first in l so they come out instead of the short suffixes. This allows me to save some bytes in the range used, given that I don't have to prevent i+n from being larger than len(s).

Thanks to @mypetlion I saved a LOT of bytes :D

You can try it online with my very own incredible test case!

-15 bytes by outputting the substrings with their count, which is allowed.
-1 byte thanks to @ceilingcat.
-52 bytes thanks to @OlivierGrégoire.

Annoyingly asort() can't be chained into one expression.

Takes s as a list of characters in (s)(n) syntax.

Try it online! Link is to verbose version of code. Outputs the lexicographically largest substring with the highest count. Explanation:

Extract all substrings of that length and push them to a list.

Replace each substring with a tuple of its count and the substring..

Print the substring with the highest count.

Takes a string, returns a string.

Note: Newlines do exist in cells, but default formatting doesn't show them. Also only 10 of the 105 rows are shown to keep the image a decent size. 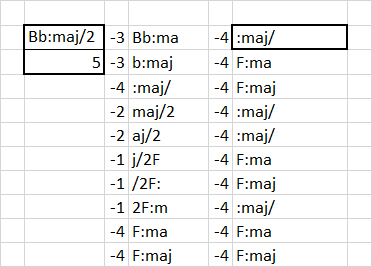 I have a feeling there may be an elusive 5-byter out there.

Takes as input a string and an int representing the string and the length of the substring respectively.

Some newlines can be replaced by semicolons if people prefer one-liners.

8
How predictable is popular music?