Draw the ionising-radiation-hazard-symbol in an arbitrary colour on a distinctly coloured background. The specific proportions were published in the June 27th 1974 issue of the Federal Register of the US Government. 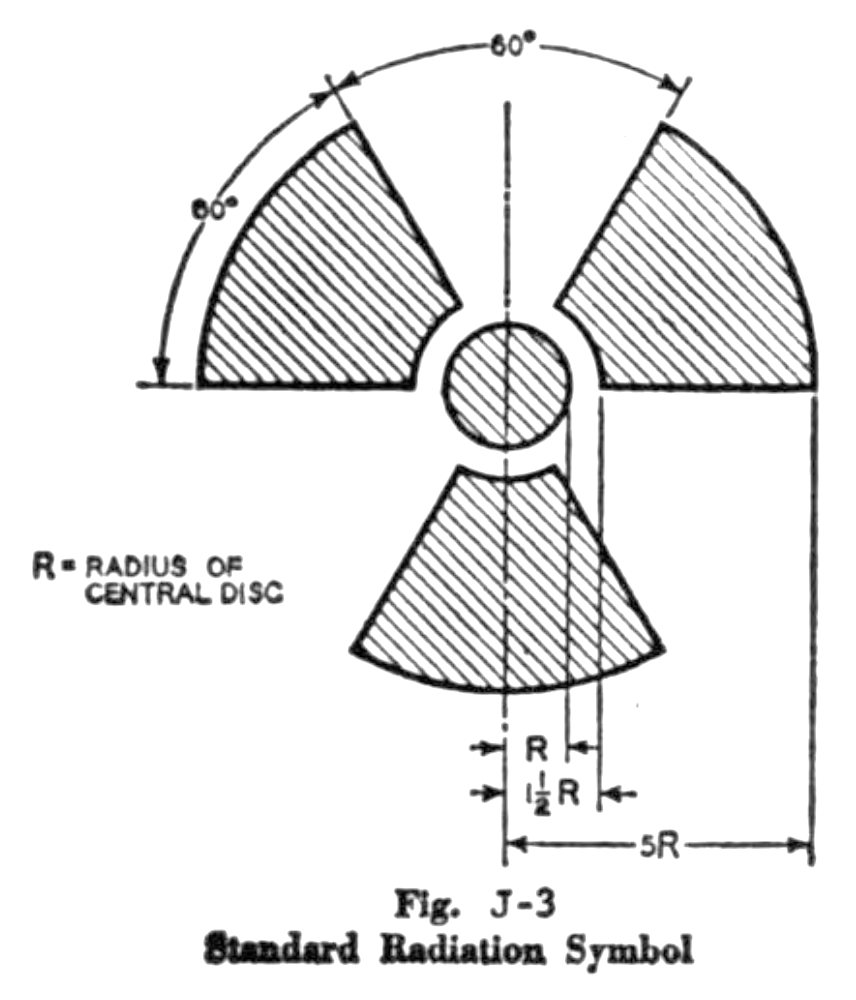 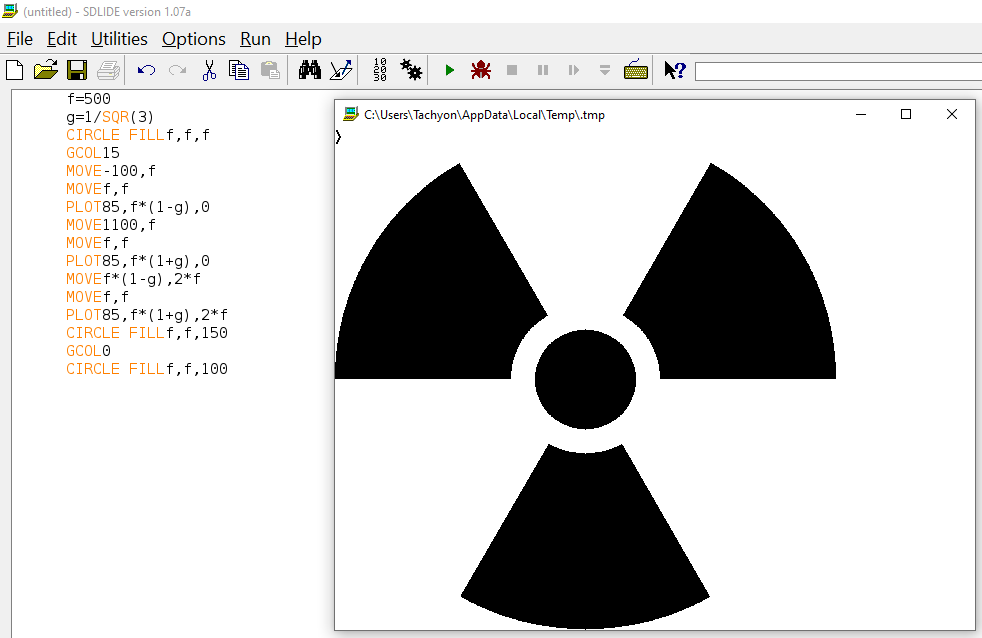 Given an input n, the image has width 2*n+1 in pixels.

Intermediate results. 0 is shown as black, 1 as white: 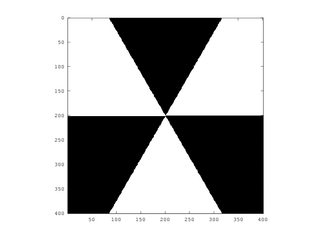 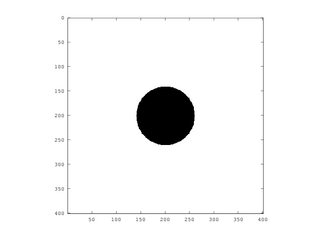 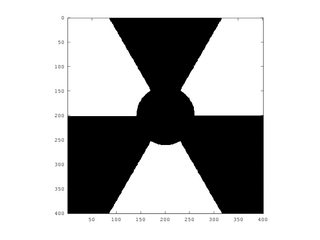 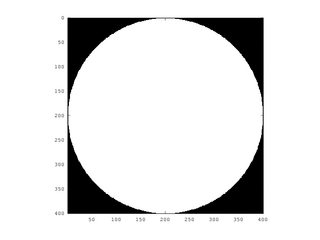 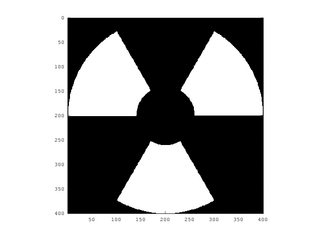 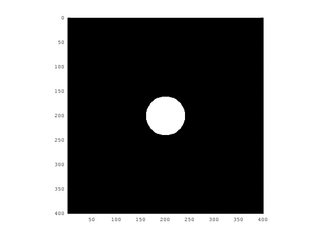 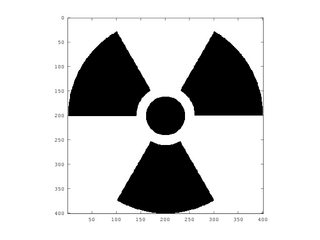 Originally based on @Arnauld's answer, but removes unnecessary characters, scales the numbers by 80% to make them golfier, and draws the curved section's lines in a different order so that I can use an H instead of an L.

Rather than basing the SVG on wikipedia's vector image - which is drawn in a reasonable way, this solution draws:

This is the result: 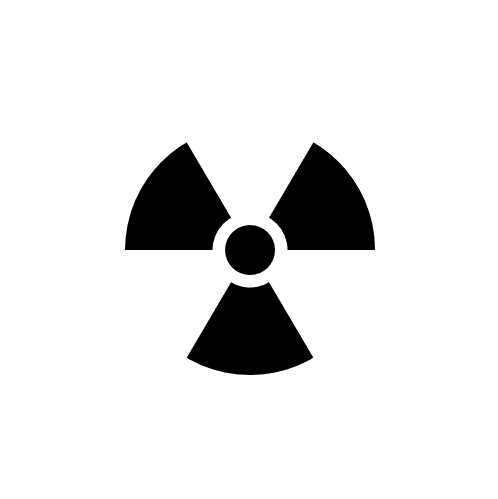 And this is the same code with the path in yellow to demonstrate what's going on: 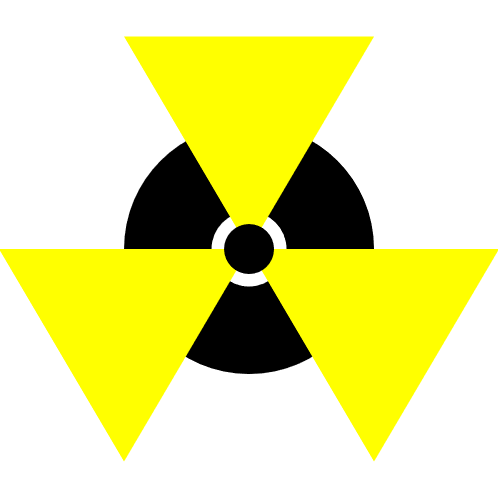 A full program that takes an integer n that determines the radius of the central circle and implicitly outputs to STDOUT a \$10n+1\$ square with the desired image encoded as 1 for black and 0 for white.

Per @flawr, this is a permitted output format. Note also that this is effectively a PBM file without the header. Adding P1 L L to the start (where L is replaced by \$10n+1\$) would make it a valid PBM file. Ta

Dyadic link taking y coordinate as left and x as right argument; returns whether the angle is within the filled outer area 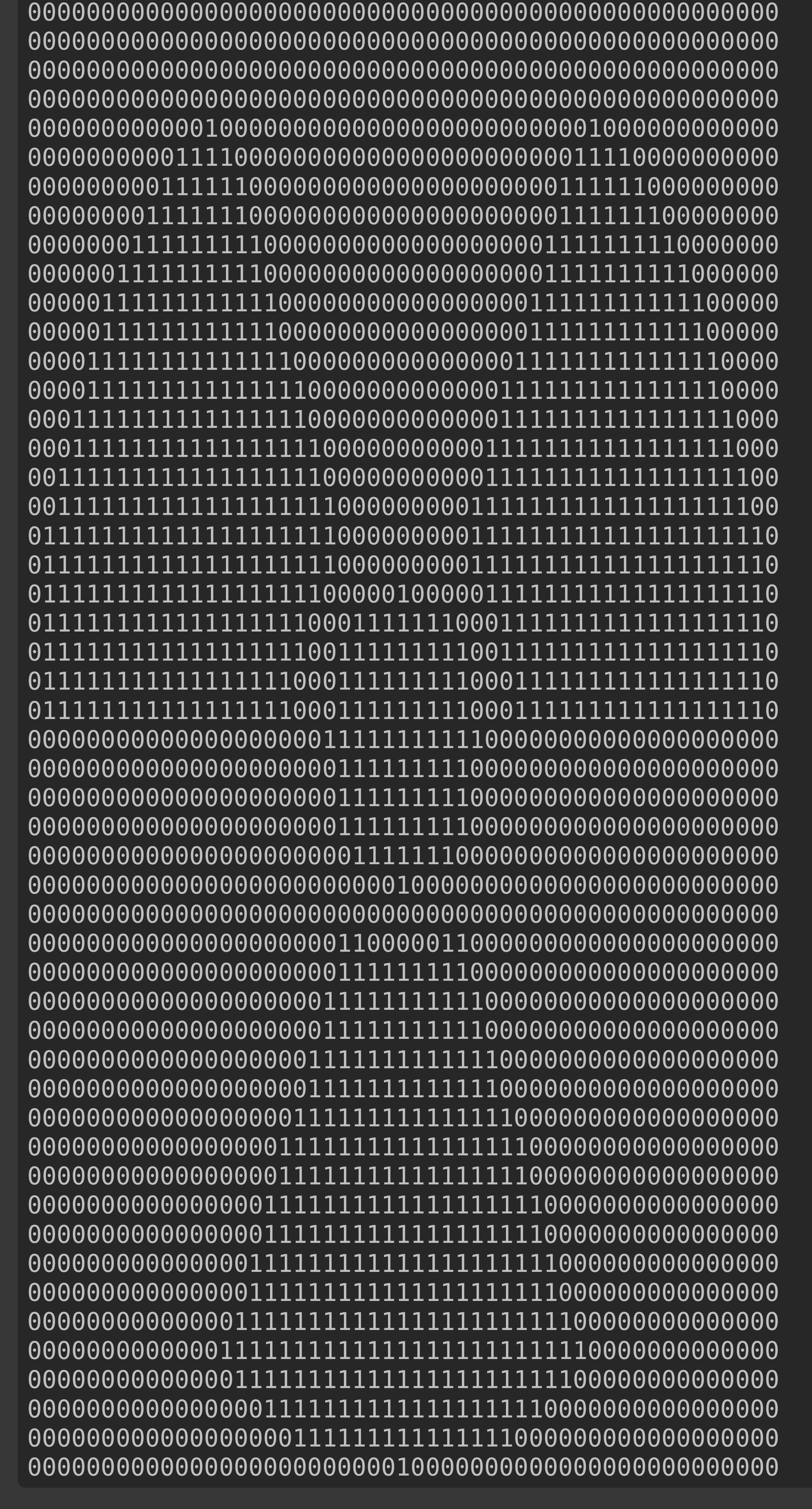 Saved 15 bytes thanks to @tsh!

We compute the squared distance from the center:

We turn the above result into a drawing bit-mask, as summarized in the following schema:

Creates a grid of 1s and 0s which can be coloured using a conditional format. It takes input in cell A1 as the value of R. 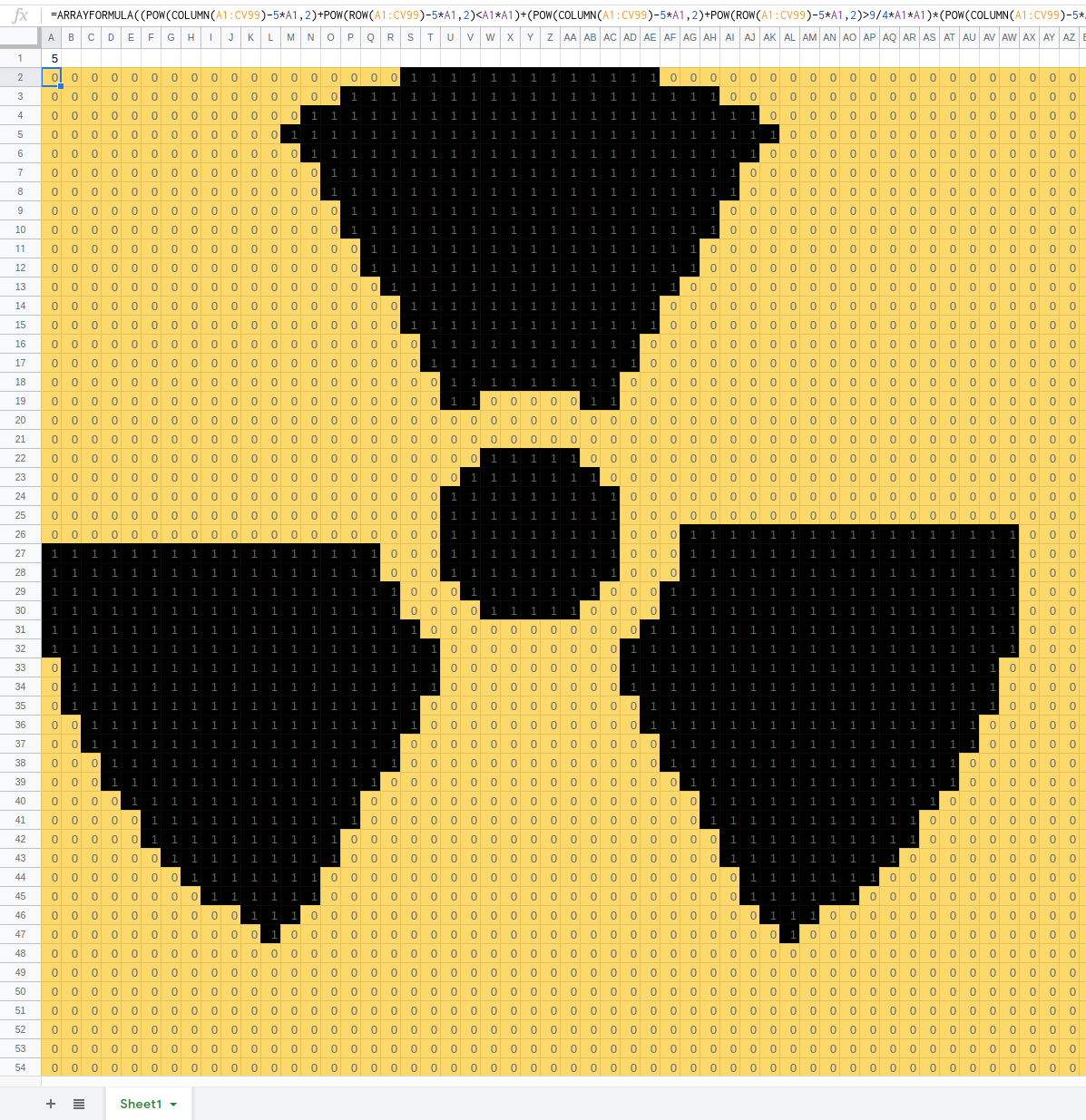 A revamped version of this file from Wikimedia Commons.

Dear god. Why.
So much went wrong.
It makes me cry.

Several major impediments that ended up making this both (a) a nearly unreadable mess and (b) frustratingly difficult.

The first problem was the fact that Runic doesn't have atan2(x,y), so I had to heckin' work that out myself. And oh yeah, make sure its reasonably golfed, it had to be dropped into an existing program with no alterations, so in-line conditional logic was preferable.

The second problem was that I had a weird issue where I'd multiply the tangent value by 3, modulo to 2pi and get...nonsense. What even is that? Why is it not using angular values? Turned out I had a stray extra value at the bottom of the stack that was throwing the math off. Whoops.

THEN
AND THEN
The program would just suddenly die after the first four bytes of the outer wedges. Oh my, what fun we had. Lets simplify, shall we? Lets just isolate the inputs at that point and... oh. It works fine.

When in doubt, check the source code. Can you spot the difference?

Yep. Integer values are totes allowed to divide by zero (and return infinity) and doubles aren't. Oh and that's not even true in the original Unity C# code (which I use as a graphical debugger) as it was an intentional design decision to terminate on div-by-zero.

Wot. Also, conversion to float instead of double for no reason. Just sittin' there.

I need a drink first. 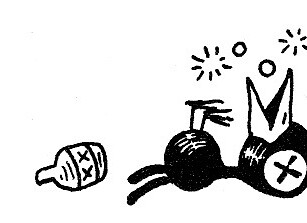 Be wary of improperly stacking unicode combining characters. The little ̹ makes the command apply to the stack-of-stacks and ̸ is boolean-not; eg. ≮ is "not less than (aka greater-equals)." Looks like it costs bytes, but because of the upper line, there's a byte savings in that line being shorter, which pays for the +1 byte cost for an extended character in the lower line (typically assuming that the lower line could be ?!/ instead of ?/).

Added -lm on TiO so that it works there. MinGW does not require it.

Outputs a 3-shade PGM file to STDOUT. Takes width (height is the same) of image as a command line argument. 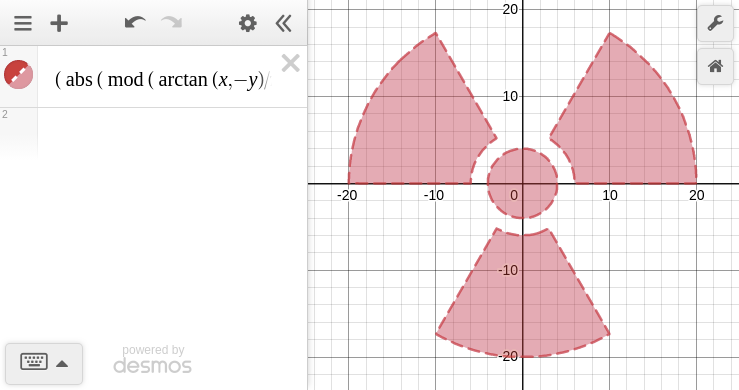 This solution draws the radiation symbol using only the Disk[] primitive, which allows for arcs.

By default a Graphics object in Mathematica has a White background and objects are Black unless otherwise specified. So we first draw three black disk sectors, then a small white disk and finally a smaller inner black disk. Unlike @Mario Carneiro's solution (which is a nice use of RegionPlot), this comes without axes and without the artifacts produced by the inner workings of RegionPlot.

Saved a byte by letting R=2 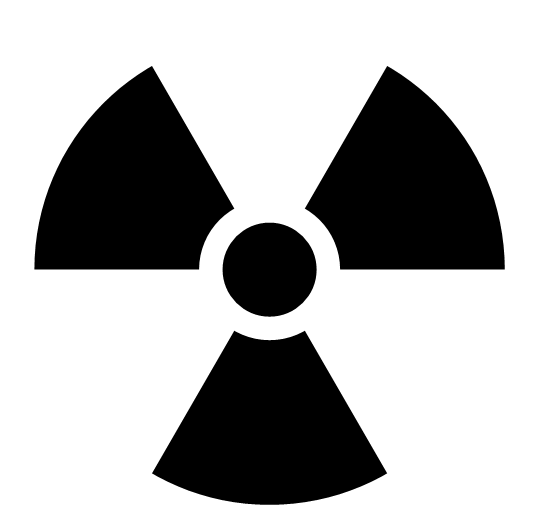 -4 bytes thanks to Roman.

It is not clear from the description whether it is required to get rid of the outline and make it black on white, but I think the submission looks best and is shortest like this. 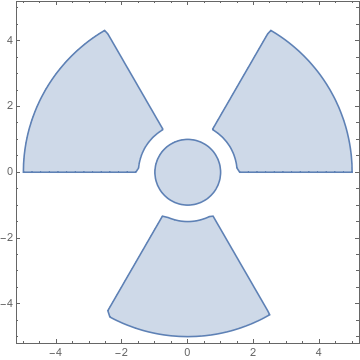 Result (as animation to see how it is drawn):

The idea behind is very simple: we count (x,y) from the center of image and r=(x*x+y*y)**.5 is the distance between point and the center.
The point is black if either r<r0 where r0 is 1/5 distance from center to a side
or if 5*r0<r<1.5*r0 (see the diagram in the question) and the angle from center to the point (computed with math.atan2) is in selected ranges. 1.5 and 7/6 there were obtained almost empirically, but could be reasoned too.
The other (most) part is a wrap-in. 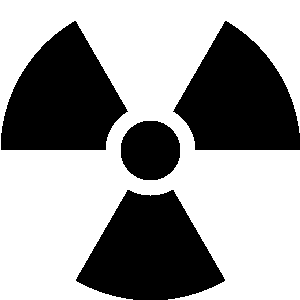 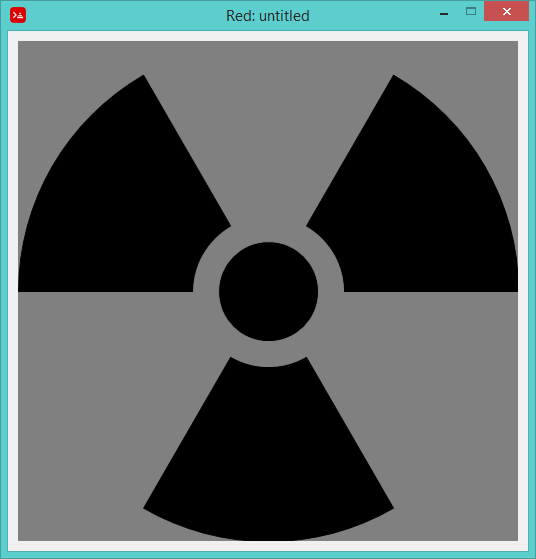 Takes a parameter n - the width/height in multiples of 50.

After seeing Will Chen's answer and seeing that the online link no longer seemed to work, I figured I'd start at it from scratch, and ended up with 11 fewer bytes.

Edit: realized max is unnecessary for the latter two functions. It's required for the first function to zero out a lot of areas, but this might be able to be improved. This makes this the shortest answer in a non-golfing language, beating out Mathematica, with some potential for improvement.

This originally used a bunch of piecewise conditionals, which simply evaluate to 1 if true and undefined if false, making them handy for this purpose. However, by just multiplying them through and comparing to 0, we can check for polarity in a shorter way. The reason we do <0 at the end instead of >0 like you may expect is that the last block, checking if r>10, needs to evaluate to false (negative). The only other notable thing is the polarity check in the first part because arctan(y/x) doesn't necessarily work as well for angle-finding as you might hope.

The last comma ; at the end of the code can be missed. 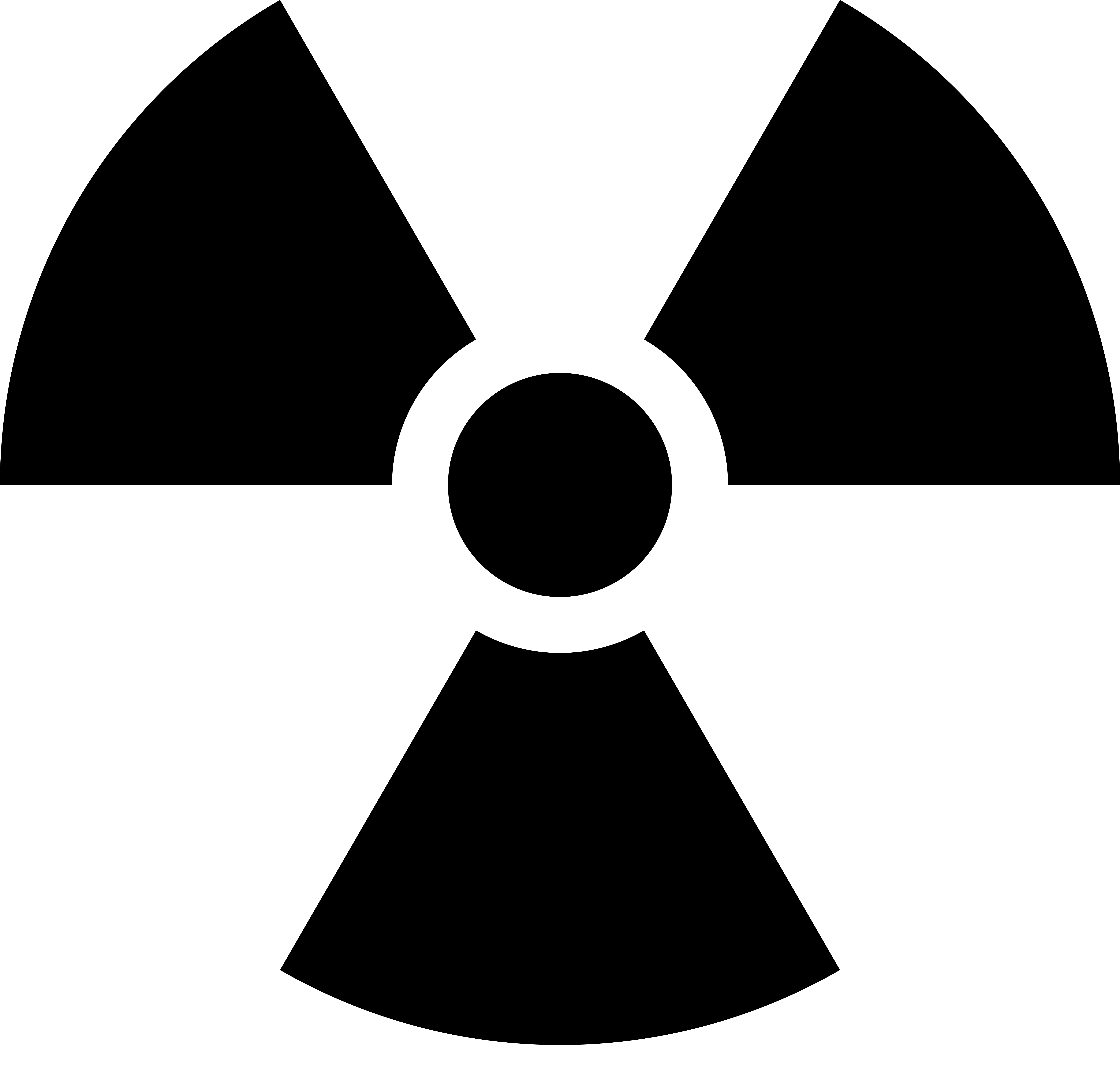 Accepting 1 parameter (size of the image). 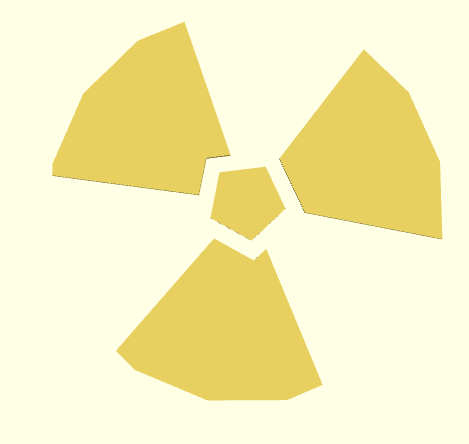 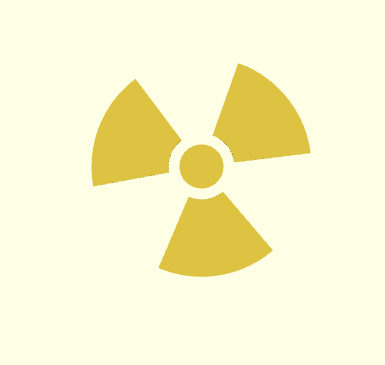 Notice the extra $fn = 100 in the circles, which are used to make them higher-resolution polygon. We could add $fs=.1; at the beginning of the file, which would also improve the resolution.

An alternative solution to the other SVG answers. Uses the stroke dash property to create the 'wings'.

If incorrect rotation is allowed, this can be reduced to 110 bytes:

Copy and paste this code into the editor then press the play button to run the shader.

The shader uses the signed distance of the shapes to be able to use the union and intersection operations to generate the symbol.

Oh man, this one was rough. The TI series of calculators do have shading functionality between functions, but that just don't cut it.
Furthermore, I was limited to 60x60 pixels, since drawing on the 62nd row or lower would result in ERR: ARGUMENT error being thrown and 60 fits the radii ratios mentioned in the challenge perfectly: $$ R = 12 \\ 1.5R = 18 \\ 5R = 60$$

So, I opted to convert a string of hexadecimal characters to pixels.

The pixels drawn to the screen will look like this:

The very long string you see on the first line of the program looks like this when formatted:

Each hexadecimal digit encodes to a series of 4 pixels drawn to the screen. For each bit set in the digit, a pixel will be drawn.

Note: TI-BASIC is a tokenized language. Character count does not equal byte count.

I shifted the center from (0,0) to (6,6) to reduce the number of negative numbers needed; this saves a byte or two.

This code isn't quite long enough to benefit from the REPLACE() trick that was needed for the Biohazard symbol.

This was done using SQL geo-spatial features introduced in SQL 2008.

Visual of output, with annotated code: 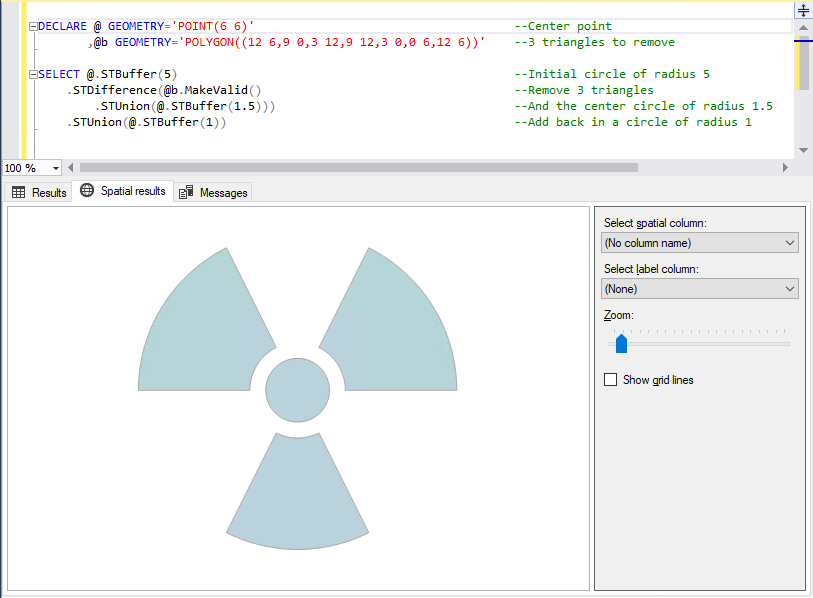 For more T-SQL drawing, see my Biohazard symbol and my Easter Bunny.

With the following changes (and ~20 bytes less), it can output an ASCII image:

Not the answer you're looking for? Browse other questions tagged code-golf kolmogorov-complexity graphical-output geometry or ask your own question.

65
Draw the € sign
119
Implement the Game of Life on Anything but a Regular Grid
60
Draw the South Korean flag
56
Draw the Warm Welcome Secret Hat
102
Sprocket Science: Animating a Chain Drive System
26
...And Mexico will Pay for It!
110
Draw the national flag of Iceland
73
Draw the ☣ (Biohazard Symbol)
18
Draw the NASA worm logo
16
Draw this fractal generated by applying Newton's method to cosh(x) - 1