Golf with a bowling ball: hello world with high complexity yet short code

In this challenge, you must write a Hello World program that is both short and complex. We measure complexity by Cyclomatic McCabe complexity, and length by the number of bytes (not characters).

The program shall take no input. The program must output exactly the ASCII-encoded string:

in this exact case. This string may or may not be followed by a single newline (LF, ASCII 10). No other text shall be output.

If you feel the need to wrap this all in a class with a Main method... it doesn't change the score.

This will spawn a total of 16384 processes (don't worry though, no more than 15 are ever active at a time), each with a cyclomatic complexity of 3: 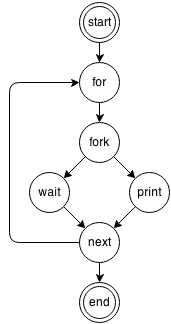 Each time a branch is encountered, both paths are taken; once by the parent, and once by the newly spawned child.

My contention is that because the parent process never stops executing (that is, control is not passed, but rather split in two directions), the child process can not be considered to be running in the same control flow as the parent, but rather in its own. The total complexity diagram would therefore be more accurately depicted as the following:

The nodes from all paths which can never be reached have been removed.

If you don't like the previous solution, consider this one: 6000000 nested branches, with a code length of 38. It could be argued - in fact I would even argue - that the complexity of this code is exactly 1, as the true condition of each branch can never be met, and therefore should be excluded from the complexity analysis.

In general, I think solutions of this type trivialize the challenge.

Not sure exactly how to score this, as it's what I call "Bogo, world!". It generates random bytes and then shells them as executables until one of them successfully outputs "Hello, world!". The complexity for any given run is impossible to determine - eventually it will exit, but the number of code branches that it generates are outside of my abilities to determine statistically.

My original thought was to do something similar with randomly emitted assemblies in C#, but VBScript has a much lower byte count given the error trapping .NET would require...

BTW - have a Task Manager open if you run this (the Exec method doesn't have a way to suppress the command window, and I need the return value so I can't use Run).

Not the answer you're looking for? Browse other questions tagged code-challenge hello-world or ask your own question.