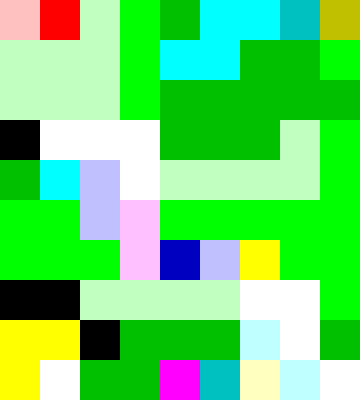 Now the letters six are in more natural order, and the program finishes one cycle faster.

For more thorough explanation, see the previous answer below.

Inspired by boboquack's 9-byte solution. The following quote was a big hint:

How it works (or, How I got to this solution)

A 6-byte program is laid out on a hexagon of side length 2, and the 7th instruction is necessarily a no-op:

Since I needed at least one mirror, I tried out various mirrors placed at various places, until I found this:

Assuming the current memory is always positive (and there are no branches/mirrors/IP changers among ABCDE), the IP follows the path

The cell C is run exactly three times, and the cells right before C are D, B, and A respectively. And the cell E is first run after three runs of C. This is exactly what we want: write one of s, i, or x on the memory and print it, and then terminate!

Now back to the actual source code:

And the execution path, linearized, with significant instructions emphasized:

Prints FORTY. A fantastic use case of a white trap :) Also I like the fact that the program is packed so perfectly.

Prints fifty. Not sure if I can do 40, but I guess pretty much unlikely.

This also throws an error because I don't return the taxi to the garage so my boss fires me. It's not a requirement to not throw errors, though, so I guess I'm fired.

Uninteresting answer, not using a formula.

16
English numeral calculator
6
Cardinal Numbers in Standard American English
4
Saying a number in the shortest way
30
Four is the magic number
13
How many letters in this word?
17
Integer goes back and forth through time
22
Stroke Count of a Chinese Numeral