When translating DNA into proteins, the ribosomes read the sequence of DNA nucleotides 3 by 3. Each set of 3 nucleotides is called a codon, and each codon encodes for an amino acid, with some redundancies. Here's the conversion table used by most organisms (table is read left, top, right): 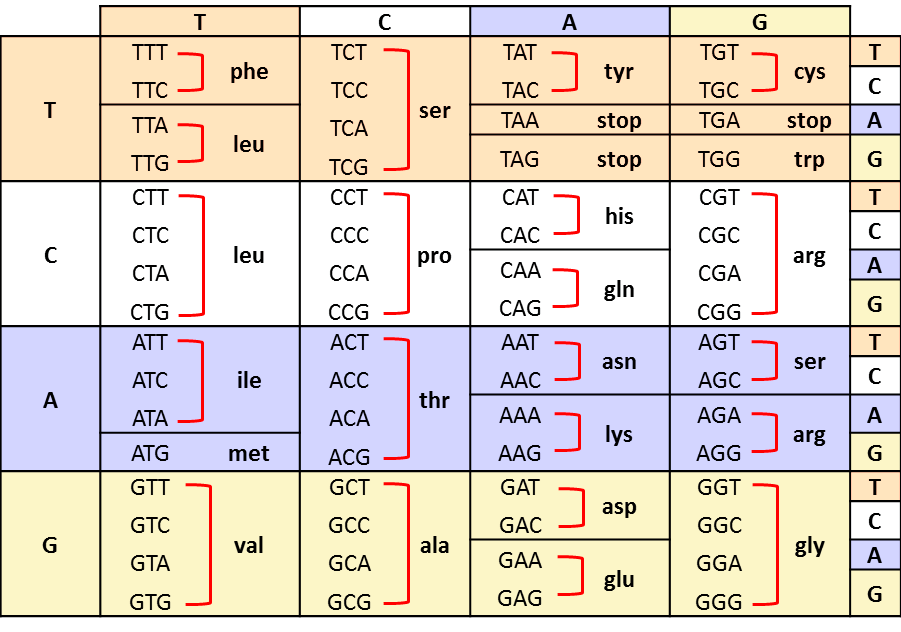 Humans and most other organisms use just a single amino acid as a "start" codon: Methionine, a.k.a. Met, M, or ATG. This means that any DNA sequence coding for a protein starts with ATG, which will be recognised by the translation machinery.

However, three different codons are used to stop the translation: TAA, TAG and TGA. If the replication machinery encounters any of these, it will stop, and the translated protein will be released into the cell.

Therefore, one of the most dangerous mutations that can occur is one that will cause an early termination of protein translation. For example, if we take this DNA sequence:

Once translated, will give:

But if we replace C at 14th position into an A, then the protein sequence will be

This substitution would be written in genomics as 14C>A.

I could also perform other substitutions (25G>T for example) that would cause early termination, but 14C>A is the first one in the sequence, and so would produce the shortest protein after translation.

Given a string of nucleotides coding for a protein (first codon is ATG, last is a STOP), find the first substitution that would cause an early termination of protein translation, resulting in the shortest possible protein. This is code golf, so fewest bytes wins!

To summarize, this will match 21 codons that can be mutated to generate a STOP. By testing the 2nd and 3rd capturing groups, we can classify them into 3 categories describing the position of the nucleotide that needs to be altered.

-1 byte using anchor at the end instead of the start

A monadic Link accepting a list of integers (in [1,2,3,4] mapping to ACGT respectively) which yields a list of lists of integers, [[position, new nucleotide], original nucleotide].

(A valid sequence with start, and stop but no possible substitution that would cause early termination will output [[4]])

Solution without regex. Uses 1235 for AGCT, respectively. Takes each base as a separate argument. Will suggest A for any instance of T*A, T*G, TA*, TG*. Outputs as (position, original base, new base). Returns an (invalid) 6-element tuple when there is no early termination site.

Input as 2341 for ACGT respectively.
Output in the format and order [position, original nucleotide, new nucleotide]. Will output the input itself if there are no possible early termination sites. (Could be 1 byte less by removing the > if 0-based positions were allowed.)

Returns nXY instead of nX>Y, or the empty string if there is no valid substitution.

Uses the actual bytes 1, 2, 3, 4 to code for A, G, C, T respectively and outputs the position as a byte as well, so you only get the position modulo 256. Outputs position + two zero bytes if there is no possible mutation.

It loads one codon at a time and uses a series of switch statements to look for all the possible codons that could mutate into a STOP. Further golfing ideas I have are:

The last bullet won't save too much; I'm happy with shaving 300 bytes for now.

Capture the string up to and including the mutation so that we can take the length.

Capture as few codons as necessary.

a nucleotide followed by AA, AG or GA (using the count of captures of capture group 4 to identify the necessary mutation)

a nucleotide either side of a G, both following a T (using the count of captures of capture group 5 to identify the necessary mutation)

End the first capture at the nucleotide to be mutated.

Look behind to see the nucleotide to be mutated (trying to capture it inside the group turns out to be nontrivial).

Also delete the rest of the input.

Output the position of the nucleotide to be mutated.

Output the nucleotide to be mutated plus a >.

If the first alternative matched then mutate the nucleotide to a T.

If the second alternative matched then mutate the nucleotide to an A.

Thanks to @Jitse for finding a bug!

important observation: there's no point trying to replace a nucleotide with anything other than T (when first in the codon) or A (when second or third)

@[x;;:;] a projection - tetradic @ (a.k.a. "amend") with 2 missing arguments. this is a function that when given args u and v, creates a copy of x and replaces its u-th element with v

i@[x;;:;]'a call the projection with corresponding elements from i and a

*< from the length(x) such possible first codons, find the index p of the one that terminates earliest