Disclaimer: ModTen is a fictional card game which was created for the sole purpose of this challenge.

ModTen is played with a standard 52-card deck. Because the full rules are yet to be invented, we're going to focus on the hand ranking exclusively.

A winning hand in ModTen. Graphics from Wikipedia.

The cards have the following values:

The above rules result in 18 distinct hand ranks which are summarized in the following table, from strongest to lowest (or rarest to most common). The probabilities are given for information only.

Given two hands, the hand with the lowest rank wins. If both hands are of the same rank, then it's a draw (there's no tie breaker).

Given two ModTen hands, output one of three consistent values of your choice to tell whether:

Using cmp in Python 2 can reduce the solution to 102 bytes, as shown by @xnor's solution.

-23 bytes thanks to @Jonathan Allan

The function f takes two arguments representing the hand of player 1 and player 2. It returns a positive, negative, or zero value in the case of a player 1 win, a player 2 win, or a draw, correspondingly. Each hand is encoded as a single string, e.g. "7cQh". 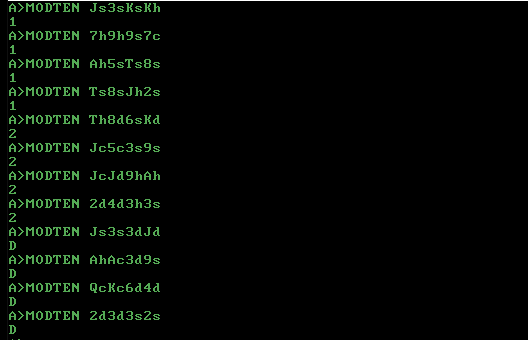 A full program taking as its argument for example ["7h","Ks"],["4s","Ts"] and printing zero if both players draw, positive if player 1 wins and negative if player 2 wins.

-1 byte thanks to Jo King

4 bytes shaved off thanks to the amazing @ceilingcat!

Basically a port of @Joel's Python3 solution, but without the base18 encoding. Expects the input as one string with a space separating the hands of the two players, and outputs an integer that is positive, negative or zero to indicate player 1 wins, player 2 wins or if it's a draw.

Try it online! Link is to verbose version of code. Takes input as two strings of 4 characters e.g. QcKc 6d4d and outputs a signed integer. Explanation:

Loop over each possible pair of values.

Compute the modified score of the hand, which is the value of the hand doubled, plus 1 if the suits are the same (i.e. the second card has suit 3).

Compressed string 23456789TJQKA represents the card characters. The input cards are looked up in this string and then the position is used to index into the first string to get the card's value.

Initialise the result to 0.

Loop over the two hands.

Calculate the modified score of the hand, and thus its frequency, and subtract the result from this.

(Actually, the comma can be any character.)

28
Score a Cribbage Hand
14
Compare two poker hands
19
Who wins a Spades trick
31
Choose the last card in a poker hand
7
1326 starting hold'em combos
9
Badugi, Who Wins?
10
Play Big 2 by yourself, as fast as you can
7
Recreate a simplified version of the card game L.L.A.M.A
3
Check if hand from card game "Rooster" is valid for the second stage