The following are binary trees and the lowest common ancestors of the some of their nodes.

Write the shortest program possible that accepts as input the root of a binary tree and references to any two nodes in the binary tree. The program returns a reference to the LCA node of the two inputted nodes.

Assume there is a least common ancestor present for any two nodes in the binary tree.

If using a pointer-based representation of a tree returns a reference to the node that is the LCA of the two inputted nodes.

If using a list representation returns the node_id for the lowest common ancestor of the two inputted nodes.

Definition of a Binary Tree

A tree is an object that contains a value and either three other trees or pointers to them.

The structure of the binary tree looks something like the following:

This assumes that nodes are defined as

as it seems silly to define the nodes as

because both the other_not_neccessarily_unique_node_value and parent_node are completely ignored in this problem.

The g function evaluates whether U is a ancestor of the nodes identified by either a or b.

If I understand correctly, sorting by value isn't guaranteed and we're returning node references so the value isn't actually used for anything. We're just checking a node's l and r values to see if they contain x and y. The function returns a falsey value if either of the provided nodes isn't in the tree so that it can be called recursively.

A dyadic link taking the tree as left argument and the two node ids as right argument. Returns the full node of the lowest common ancestor.

FirstCase seems to be traversing the tree in a different order than Cases...

Function which takes the tree and two node values, and returns the value of the lowest common ancestor.

Represents the tree as an expression, where the head contains the value, and uses Null (or anything else that is guaranteed to not be a node) to represent the absense of a leaf.

For the example tree given, the structure looks like this: 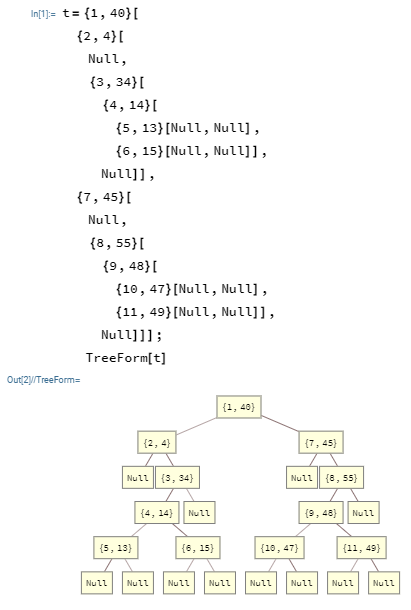 Try it online! Link is to verbose version of code. Takes input as a list of [id, value, leftid, rightid, parentid], where a 0 value means no id. Explanation:

Walk the tree up from the first input node id, saving the found ids in the predefined empty list.

Walk the tree up from the second input node id until one of the ids matches.

Print the matching id. (If strings were acceptable as ids, the Ｉ would not be necessary, but if both strings and numbers had to be supported, then that would cost an extra byte.)

First input is a tree in the format described in this answer, because I have no idea how the format in the question is supposed to work. Second input is a pair of node ids.

Welcome to Code Golf and Coding Challenges Stack Exchange! This is a site for recreational programming competitions, not general programming questions. Challenges must have an objective scoring criterion, and it is highly recommended to first post proposed challenges in the Sandbox.
Visit chat