Your task is to generate an image, exactly 4,000 bytes in size, with the highest entropy possible. You may use any language, libraries, or image format you choose, and you may output to the console or to a file so long as you upload your image here.

Note: the image above is not the actual file I used, but it is the image.

The file is in the netpbm format, and can be generated with this C code:

The random seed must be passed into the program. After trying some seeds, I got one which produced a 4204 byte gzipped file. As Nnnes pointed out, tar will include metadata in the file, so your results might differ from mine.

netpbm isn't supported everywhere, but it works with imagemagick's convert (so just do convert image.pgm image.png to turn it into a png).

A file which consists of entirely random bytes is very hard to compress (in fact, any possible compression algorithm will do on average, no better than not compressing for random files). The content of the actual file is just P5 2 1993 followed by 3986 random bytes, which is why gzip has such a hard time compressing it.

Image format used is PNG. I'm pretty sure the challenge is over because I'm leaving 4 instances modified script overnight.

So how does it work?

Using a Java program I'm generating a JPG file. Then, it's compressed and it's size is being checked prompting me shall I keep it. I ran this script for a while and it generated me a few tar.gz files with varying sizes. Then, after a new winner is found, Brainfuck code is regenerated.

Screenshot of the program running: 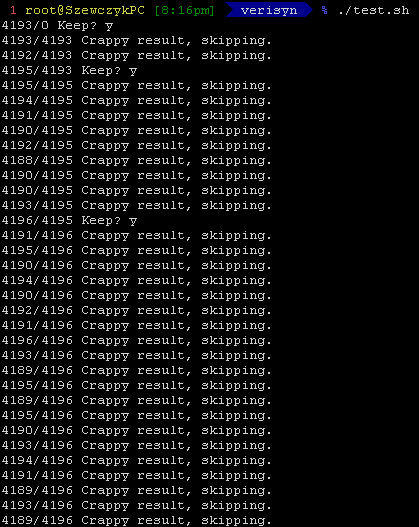 It could be fully automated removing the read and keeping implicitly, but I'd wish to have control on it.

Not the answer you're looking for? Browse other questions tagged code-challenge graphical-output compression or ask your own question.