Or, "Swap the first and last letters of each word"

Your challenge is to, given a string of alphabetical ASCII characters as well as one other character to use as a delimiter (to separate each word), swap the first and last letters of each word. If there is a one-character word, leave it alone.

The examples/testcases use the lowercase letters and the space as the delimiter.

You do not need to handle punctuation; all of the inputs will only consist of the letters a through z, separated by a delimiter, all of a uniform case.

For example, with the string "hello world":

-1 bytes by using a newline for a delimeter

Fixed a bug pointed at by Cubic and also golfed down 1 byte.

Input is via a pre-existing table t with varchar field v, per our IO standards.

Reading from back to front, STRING_SPLIT breaks a string into individual rows via a delimiter, STUFF modifies the characters at the specified positions, then STRING_AGG mashes them back together again.

Convinced there has to be a shorter approach (and I was right) but this'll do for now.

Takes input separated by newlines; can be either uppercase or lowercase.

Uses regex to replace each word with a captured first and last letter surrounding the original core. If it's a single character, replace will find nothing and leave it alone.

-1 byte, thanks to squid

-1 byte, thanks to Erik the Outgolfer

Could definitely be golfed further.

I wanted to use a xor swap but that fails if a word is only one character long.

This code uses a few cheats, so i don't know if it is competing. The separator in the input is a 0x01. The input needs an extra trailing separator, otherwise the last word won't be printed.

If halting is not necessary:

If halting is necessary:

In this version, following space after input is necessary. fixed. Now it is OK to not finish with space.

This doesn't run on TIO (Try it Online) because spin postdates build 1525, the one TIO uses. Here's a screenshot of running it in build 1889, the official 0.98 release: 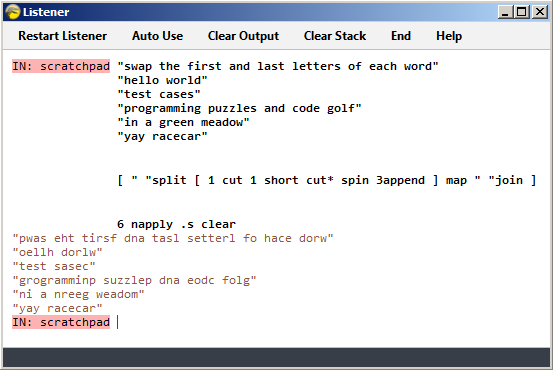 Uses newline for the word delimiter